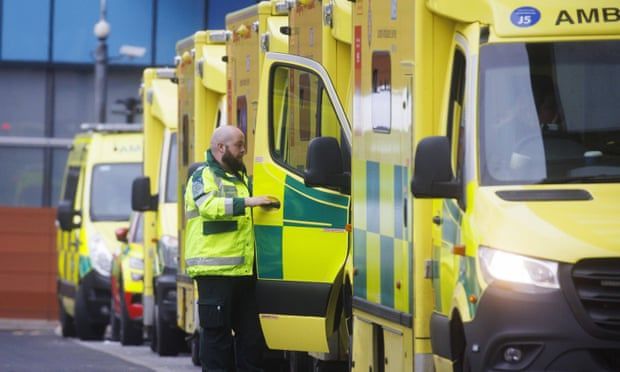 Shift could leave millions vulnerable because of ethnicity, postcode or job, warns thinktank

Growing numbers of Britons are paying for private medical treatment in a shift that could undermine the NHS and create a “two-tier” health system, a report has warned.

Declining access to and quality of NHS care, both worsened by the Covid-19 pandemic, have begun to “supercharge” the trend, with one in six people prepared to go private instead of waiting.

That is among the findings of a report by the left-leaning IPPR thinktank, which warns that in future getting fast, high-quality care on the NHS could become as difficult as the situation that already exists in regards to state-funded dental treatment, which has become a postcode lottery.

“People are not opting out of the NHS because they have stopped believing in it as the best and fairest model of healthcare,” said Chris Thomas, the IPPR’s principal research fellow and co-author of the report.

“Rather, those who can afford it are being forced to go private by the consequences of austerity and the pandemic on NHS access and quality, and those without the funds are left to ‘put up or shut up’.”

The report says that unless the NHS starts performing better “people who can and are willing to do so will supplement their entitlement to NHS care with private healthcare products”.

If a significant move away from public healthcare happens there will not be a sudden shift to an American-style health system. “Instead … it might be comparable to dentistry in England, where poor NHS access for some, and superior but expensive access for many, has been gradually implemented and normalised since the 1950s,” the report adds. “We stand at the precipice of a growing ‘opt-out’ by those who can.”

Such a trend could threaten the deep and widespread public support for the NHS among voters and leave millions of patients vulnerable because of their ethnicity, postcode, income or job, it says.

YouGov polling for the IPPR found that 17% of people would go private if they knew they were going to have to wait longer than 18 weeks – the maximum time the NHS says anyone should have to wait before having planned hospital treatment. 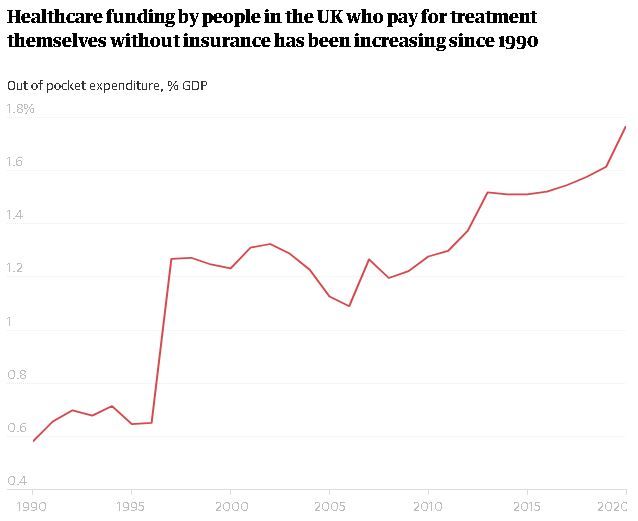 In the survey of 3,466 adults, the fieldwork for which was done in November 2021, YouGov found that 31% (1,095) found it hard to access healthcare during the pandemic. Of them, 12% went private and another 26% considered doing the same but ultimately did not do so.

“With NHS waiting lists now at record levels, it is not surprising that more patients across the country are looking at private healthcare,” said David Hare, the chief executive of the Independent Healthcare Providers Network, a trade body that represents about 100 private providers across the UK.

The proportion of healthcare spending from people paying for private hospital care, fertility treatment, health screening, private GP appointments and other sorts of care has risen from 0.46% in 1980 to 1.77% in 2020 – the biggest rise in the G7 – the IPPR found.

Charlotte Wickens, who had been diagnosed with thyroid cancer in 2017, paid £350 for an ultrasound scan of her neck in January after a lymph node appeared.

“My GP wasn’t confident on how long it would take in the community [on the NHS] but said it would likely be a while,” said the 28-year-old. “My mum suggested I go private. I was seen very quickly, within a few days of being referred. And I got the positive news that it wasn’t cancer again.

“I felt bad about going private,” she added. “I knew it was a privilege that not everyone would have and it felt like jumping a queue of people who were in exactly the same situation as me and needed the clarity just as much, but I could pay for it.”

A Department of Health and Social Care spokesperson said: “We have set out the biggest NHS recovery plan in history backed by unprecedented investment which – combined with record numbers of doctors and nurses working in the NHS – will reduce waiting times, give patients more control over their care, and harness technology to free up staff.

“The plan will help tackle the care backlog by delivering new surgical hubs and at least 100 community diagnostic centres to help millions of patients get the surgery they need and earlier access to tests – providing an extra 9m scans, checks and procedures by 2025.”