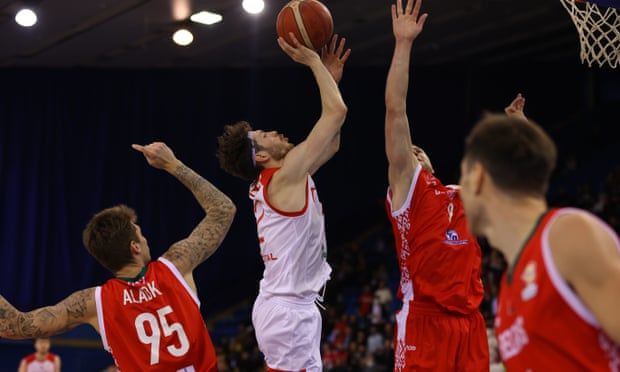 Priti Patel has cancelled visas issued to Belarus’ men’s basketball team over their country’s support for Vladimir Putin’s invasion of Ukraine, on a day where the sporting world showed its disdain for Russia’s aggression in the region.

The Belarus team had been due to play Britain in Newcastle in a world cup qualifier on Monday. The match was postponed on Friday by the International Basketball Federation (Fiba) after an “evaluation of the current security situation”. The Netherlands’ scheduled match against Russia, scheduled to take place on Saturday, was also pulled.

On Saturday, the Norwegian Ski Federation said it does not want Russian athletes competing at upcoming world cup races and world championships in Norway. Meanwhile the football associations of Poland and Sweden united in statements saying they refuse to play Russia in playoffs for the World Cup 2022.

Patel, the UK’s home secretary, tweeted: “I have cancelled the visas of the Belarusian Men’s Basketball Team who were due to play in Newcastle.

“The UK will not welcome the national sports teams of those countries who are complicit in Putin’s unprovoked and illegal invasion of Ukraine.”

Britain and Belarus had been due to play two matches – one in Minsk on Friday and the second at the Vertu Motors Arena, home to Newcastle Eagles, on Monday. Fiba first announced on Thursday that the Minsk game would be postponed before confirming the following day that the Newcastle game would also not go ahead. Following this latter decision it is understood that the Belarus team then cancelled their plans to travel to the UK.

Toni Minichiello, the interim chair of the British Basketball Federation (BBF), said in a statement: “We thank Fiba for all their help and for understanding our concerns about travelling to Minsk.

“I would also wish to take the opportunity thank the BBF Board, GB Team Staff and Players for coming together and presenting a unified position. The safety of our players and staff are and will always be our primary focus.”

Elsewhere, Norway’s skiiing federation said: “Russia’s violations of international law and attacks on the Ukrainian people demand international condemnation and sanctions. Sport is not detached from this and cannot remain passive to what is happening now.

“The Norwegian Ski Federation’s message to Russia and Russian athletes is crystal clear – we do not want your participation.”

Norway is scheduled to host events in Alpine skiing, cross country skiing, ski jumping and Nordic combined over the next few weeks. The federation added that it would follow up with the global body, the International Ski Federation (FIS).

On Friday FIS cancelled all remaining competitions of the 2021-22 season that were to be held in Russia but said Russian athletes can continue to participate in its competitions, in line with International Olympic Committee recommendations for international sports federations.

While recommending that Russia’s athletes be allowed to participate in events, the IOC urged federations to either move or cancel competitions currently planned in Russia or Belarus.