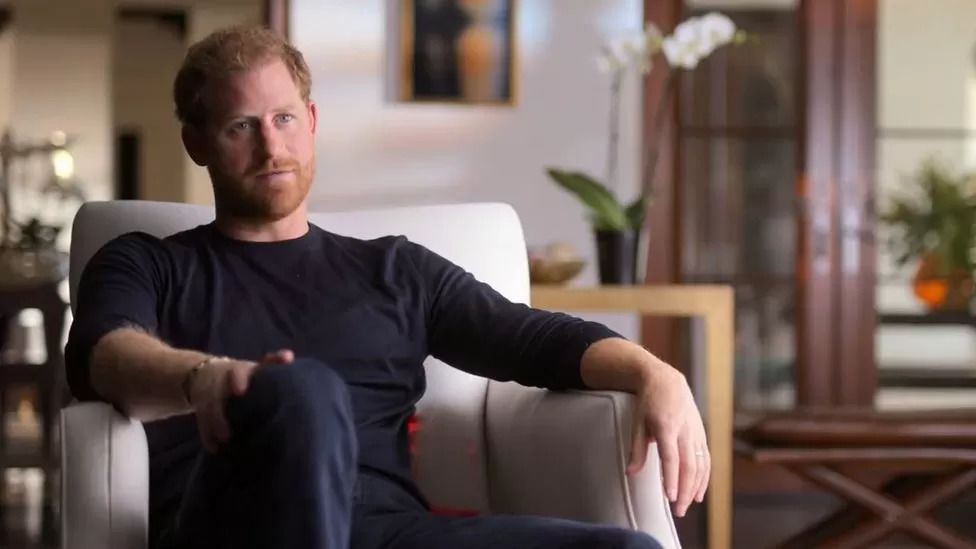 The issue of race is raised, with a commentator saying of the couple's experience: "It's about hatred. It's about race."

The series is released on Thursday.

A further three episodes of the Duke and Duchess of Sussex's account of royal life will follow on 15 December. It has a 15 age rating, with Netflix's listing saying it deals with "discrimination".

The latest trailer shows a series of hard-hitting comments, which show no sign of any olive branches to the Royal Family.

Instead there is a commentary that claims "there was a war against Meghan to suit other people's agendas".

Over an image of senior royals on the Buckingham Palace balcony, Prince Harry says: "There's a hierarchy of the family. You know there's leaking, but there's also planting of stories."

Prince Harry and Meghan, who are no longer "working royals", were not allowed on to that symbolic balcony for late Queen's Platinum Jubilee.

In the previous trailer there was a noticeable image of Catherine, Princess of Wales, looking very stony-faced and this latest teaser includes another austere picture of her, alongside Camilla, the Queen Consort, and Sophie, the Countess of Wessex.

The trailer for the six-part series shows a quickfire narrative of the couple's difficult relationship with the royals, the media and the public - which ended with Prince Harry and Meghan moving to the US.

It begins with Meghan being warmly received by the public - treated like a "royal rock star".

But then it suggests "everything changed", with Prince Harry talking of leaks and planted stories and with a commentator referring to "hatred" and "race".

The trailer links Meghan's experience to the pressure faced by Princess Diana using images of the intense press attention surrounding her - with Meghan saying "I realised, they're never going to protect you".

"We know the full truth," says Prince Harry at the end.

Last week, a teaser for the season was released at the same time as Prince Harry's brother, the Prince of Wales, was in the US to present his Earthshot environmental prize.

The documentary is said to offer an insight into what the couple describe as the inside story of why they stepped back from their royal duties.

Prince Harry and Meghan formally stepped down as senior royals in March 2020.

A year later, during an interview with US talk show host Oprah Winfrey, Meghan said life within the Royal Family became so difficult at times she "didn't want to be alive anymore".

The trailer for the upcoming documentary comes against a backdrop of a royal race row following comments to a black British guest at Buckingham Palace.

Lady Susan Hussey, Prince William's godmother and lady-in-waiting to the late Queen, stood down from her honorary duties last week after Ngozi Fulani, the founder of the charity Sistah Space, described how she had been repeatedly asked where she "really" came from at a reception.

A spokesman for Prince William responded to the row by saying that "racism has no place in our society".
#Prince William
Add Comment