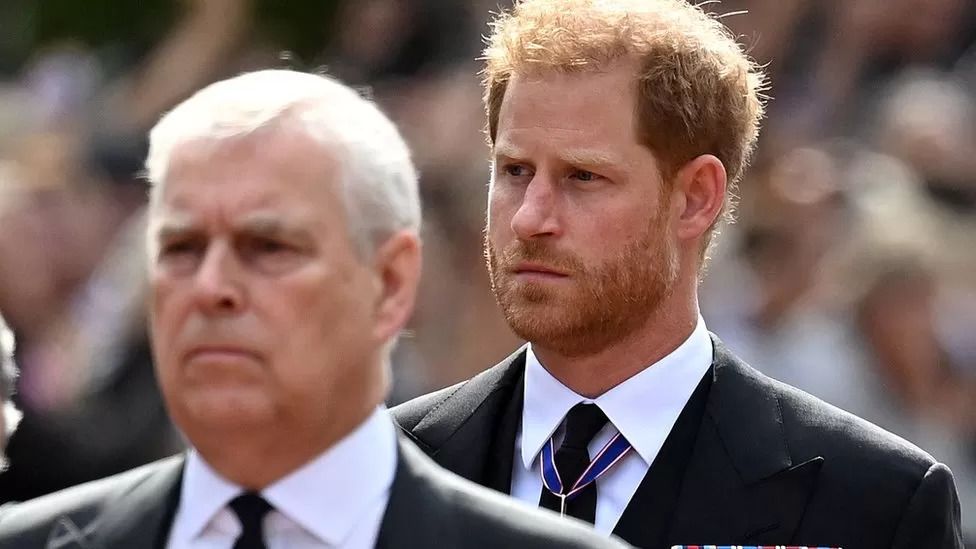 Prince Andrew's and Prince Harry's role in being allowed to stand in for King Charles for official duties has been challenged in the House of Lords.
They remain two of the five "counsellors of state" who can carry out important constitutional duties if the monarch is unwell or overseas.

Viscount Stansgate questioned their status when one had "left public life" and the other had "left the country".

It was time for a "sensible amendment" to end this arrangement, he said.

Lord Addington, a Liberal Democrat, suggested that working royals - "somebody who actually undertakes royal duties" - should be given priority for these roles.

In response to questions from peers, the Lord Privy Seal, Lord True, said he would not comment on "specific circumstances", and the Royal Household would need to be consulted about any change.

But Lord True told the House of Lords: "The government will always consider what arrangements are needed to ensure resilience in our constitutional arrangements.

"And in the past we have seen that the point of accession has proved a useful opportunity to consider the arrangements in place."

Under the Regency Act, the counsellors of state are the spouse of the monarch and the next four in the line of succession, over the age of 21.

At present these are Camilla, the Queen Consort; Prince William, the Prince of Wales; Prince Harry, Duke of Sussex; Prince Andrew, Duke of York and his daughter, Princess Beatrice.

They can carry out official duties, such as signing documents, receiving ambassadors or attending Privy Council meetings, if the monarch is temporarily ill or abroad,

This authority was used earlier this year to allow the then Prince Charles to carry out the State Opening of Parliament on behalf of the late Queen.

Labour peer Viscount Stansgate, son of Labour politician Tony Benn, said this showed the value of updating the Regency Act, to ensure royals were available to stand in.

"It is the only reason why it was possible to open the current session of this Parliament," he told peers.

And he called on the government to approach the King over changes to the current arrangements, now that Prince Harry was living in the United States and Prince Andrew no longer carried out royal duties.

Changes to the legislation would be the responsibility of the Cabinet Office and a spokeswoman referred back to the comments of the Lord Privy Seal.
#Prince William
Add Comment