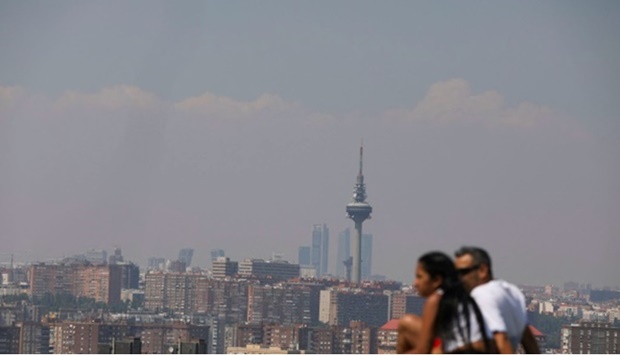 Smoke from a huge wildfire in central Portugal enveloped skyscrapers known as the "Four Towers" in Madrid 400 km (250 miles) away on Tuesday, and residents of the Spanish capital complained of a strong burning smell.
The fire, which has ravaged Portugal's Serra da Estrela national park, started on Aug. 6 and had been largely put out as of Sunday, but reignited again on Monday, leading to the evacuation of several villages.

More than 1,100 firefighters backed by 13 waterbombing aircraft were tackling the blaze, which has already torched more than 17,000 hectares.

NASA Worldview satellite images showed the plume of smoke extending from the west of the Iberian peninsula to its eastern half and beyond Madrid, where emergency services had to explain to worried residents that there was no fire nearby.

In eastern Spain, however, hundreds of firefighters were working around the clock to control two wildfires in the Valencia region.

In the Vall d'Ebo area south of Valencia, roads have been closed and about 2,000 people evacuated since Sunday after lightning ignited the wildfire, which has since burned more than 9,500 hectares.

Climate change has left parts of the peninsula at their driest in 1,200 years, according a study published last month in the Nature Geoscience journal.

July was the hottest month recorded in Spain since at least 1961 when Spain's meteorological service began its register.

Wildfires have burned more than 270,000 hectares in Spain so far in 2022, way above the 15-year annual average of 70,000, according to the European Forest Fire Information System.

In Portugal, forest fires have ravaged around 85,000 hectares, or nearly 1% of the country's territory, the highest percentage in the European Union.
Add Comment