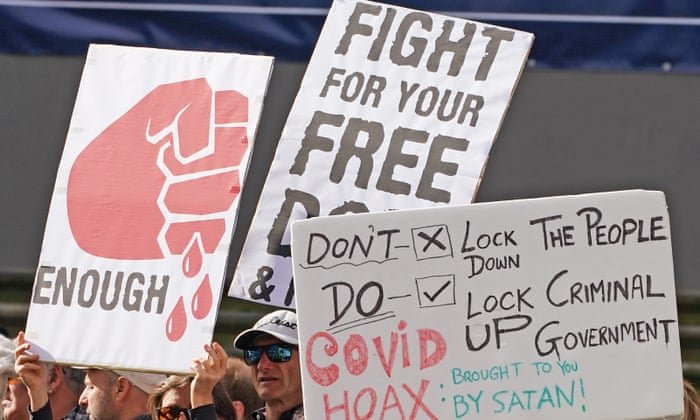 Identity of organisers is unclear, but experts warn of cross-pollination with far-right ideas
Police have said they will break up anti-lockdown protests advertised on social media for this weekend if necessary, amid warnings that the events could be exploited by the far right.

Flyers for around 60 protests to be held in parks in cities such as Manchester, Leicester and Southampton have circulated online, produced by the little-known “UK Freedom Movement” which aims to say “no to the new normal and no to the unlawful lockdown”.

A spokesperson for Greater Manchester police said: “We have patrol plans in place throughout the area to respond to these protests if required.” Similar comments have been made by several other forces.

Rules on physical distancing mean no large-scale gatherings are permitted. People are allowed to meet just one other person from outside their household at a time, and must keep two metres apart.

It is not clear who is behind the flyers, which also say “no to mandatory vaccines”, and police are unsure how seriously to take them. But there are warnings that they tap into coronavirus arguments swirling on the far right.

Police sources told the Guardian there was a “cross-pollination” between anti-lockdown sentiment and the far right.

On Thursday Jayda Fransen, a former deputy leader of the extremist anti-Muslim group Britain First, highlighted a monthold YouTube channel called the British Freedom Movement on her Telegram feed. She is also the sole director of a company created at the end of last month called Freedom Movement Ltd.

Although she did not claim to be behind the weekend flyers, Fransen is one of a number of far-right figures who are trying to win support by opposing the lockdown.

One of the YouTube videos from Fransen’s organisation announces that she is launching a “free advocacy service” aimed at “my people” and anyone subjected to “tyrannical and unlawful policing” during the lockdown.

Unlike in the US, anti-lockdown protests have so far been minimal in the UK. Police broke up a protest by around 50 people in Westminster on Saturday carrying banners and messages ranging from “no consent” to 5G conspiracy theories.

Hope Not Hate, an anti-extremism campaign group, said that while it did not believe the latest planned protests were organised by the far right, it did say there was a big risk of cross-pollination, partly because of the narratives being promoted around the groups.

The former BNP leader Nick Griffin has been criticising “Covidcops” and encouraging people to “smash the lockdown” on his Twitter feed in the past couple of weeks, while Tommy Robinson filmed himself criticising police for setting up a mobile speed camera, claiming it unfairly targeted key workers.

Tackling far-right extremism represents a growing proportion of the work undertaken by counter-terrorism police and MI5. The security service was handed the lead responsibility to tackle the threat in 2018, and last year among six violent terror plots it disrupted, three were from the far right.

Experts and police have cautioned that people have had more time to engage with extremist material during the crisis. Jacob Davey, of the Institute for Strategic Dialogue, said: “The concern is that while the whole population has been locked down it creates the opportunity for people to be radicalised by rightwing content.”

There is some anecdotal evidence that traffic to far-right sites has grown. The ISD said an international white supremacist Telegram channel focusing on coronavirus grew its user base from 300 to 2,700 people in a month.

Police are also concerned that fewer people are making referrals to the government’s anti-radicalisation Prevent programme during lockdown. Around a quarter of cases referred to Prevent related to the far right.

Ch Supt Nik Adams, the national coordinator for Prevent, said: “Isolation may exacerbate grievances that make people more vulnerable to radicalisation, such as financial insecurity or social alienation. The extremists and radicalisers know this and, as ever, will look to exploit any opportunity to lead those people into harm, often using topical issues as hooks to lure them in.”
Add Comment