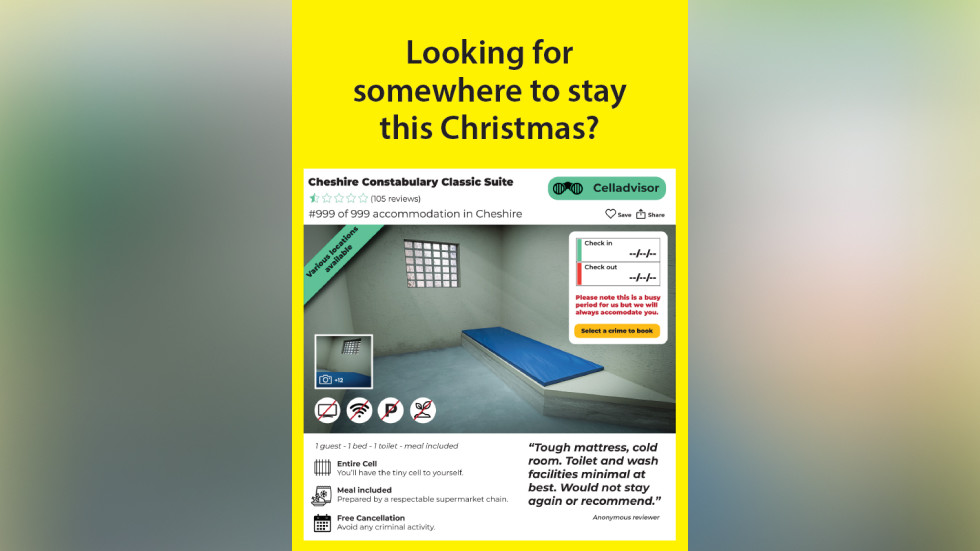 A UK police force has mailed out a ‘Christmas card’ to hundreds of serial offenders, featuring a spoof travel website ad of their jail cells as a warning to “think again” before getting into trouble over the festive period.

The Cheshire Police sent out the cards as part of its ‘Operation Jingle’ crime prevention campaign for the county’s criminal element. It includes a mock listing for the “Cheshire Constabulary Classic Suite” on a Tripadvisor-esque travel site, “Celladvisor.”

The spartan cell, which comes with a mattress and toilet, and includes meals “prepared by a respectable supermarket chain,” gets a half-star rating from 105 reviews and is ranked dead last among 999 accommodations in Cheshire.

The ad touts a “free cancellation” policy and the force’s ability to “always accommodate” offenders despite the “busy period,” but notes the lack of television or Wi-Fi. It also includes an anonymous review criticizing the “tough mattress, cold room ... minimal at best [toilet and wash facilities].”

Chief Constable Mark Roberts told the Daily Mail, however, that the aim of the ‘operation’ was to “deter criminals” and “minimise disruption across the county and keep people feeling safe and reassured over the festive period.”

"This card has been designed in order to remind some of our more serial offenders that crime will not be tolerated, and if you do commit crime then we will target you."

A message from Roberts inside the card warns repeat offenders to “think again” if they are considering committing a crime, since spending Christmas in a cell is “not recommended.”

The tongue-in-cheek stunt was appreciated by some on social media, a number of whom noted on Facebook that “helpline numbers” would have added to the public safety message. But others said that the focus should be on “rehabilitation” instead.

Some said the cell’s conditions and meal provision would be a welcome change from going “hungry and homeless” over the holidays.

Not everyone was amused by the stunt, however. Former Home Secretary David Mellor called the Christmas cards “ludicrous.”