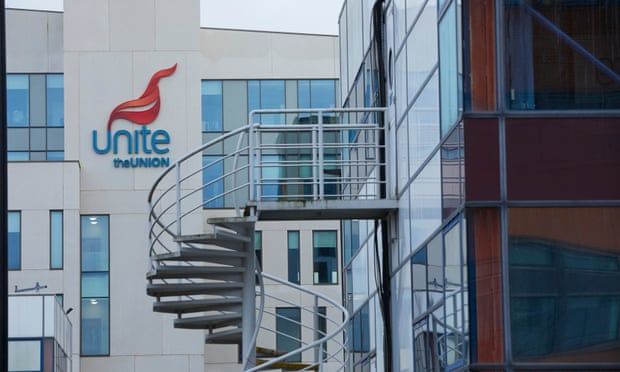 Union’s offices raided as part of investigation into allegations of bribery, fraud and money laundering
A police inquiry involving a Unite union official is examining contracts related to the construction of a £98m hotel and conference centre in Birmingham, the Guardian has learned.

South Wales police and HM Revenue and Customs raided the union’s offices in central London on Thursday as part of an investigation into allegations of bribery, fraud and money laundering.

Sources confirmed that contracts related to the 170-room hotel and conference centre were part of their inquiries.

It is understood police are also examining contracts related to members’ services that were connected to the union.

More than 20 officers arrived unannounced on Wednesday at the union’s offices in Holborn, central London. Police examined a single office and took away dozens of files, documents and a computer.

Police have also searched a number of other addresses in south Wales, Merseyside, Cheshire, north Wales, Greater London and Northamptonshire.

A document leaked to the Guardian in January last year showed that costs for the Unite hotel and conference centre appeared to have more than doubled from 2015, when the initial estimates were £35m, to 2020. The build was completed in December 2020 at a cost of £98m.

The then general secretary, Len McCluskey, told a meeting of the Unite executive council in January 2021 that costs had risen because of the union’s promise to employ workers who had union membership, avoiding the involvement of firms that had a history of blacklisting, directly employing workers and paying them at least national pay rates.

The union’s executive committee concluded that the directly employed labour, high construction costs in Birmingham and a change in project scope pushed up the price.

The election of a new Unite general secretary last summer prompted calls from MPs and union officials for an inquiry into the costs. The newly elected general secretary, Sharon Graham, launched an inquiry in December into how the building costs spiralled into a “potentially significant loss” for the union.

On Thursday a Unite spokesperson said: “A Unite employee is subject to a criminal investigation by the police. On Wednesday 6 April the employee’s office at Unite HQ, in Holborn, London, was accessed and searched by the police under warrant.”

A police spokesperson said: “South Wales police has executed warrants as part of an investigation into allegations of bribery, fraud and money laundering.

“The joint investigation with Her Majesty’s Revenue and Customs is continuing and a number of suspects will be interviewed in due course.”

On Friday neither the police nor the union added to their previous statements.
Add Comment