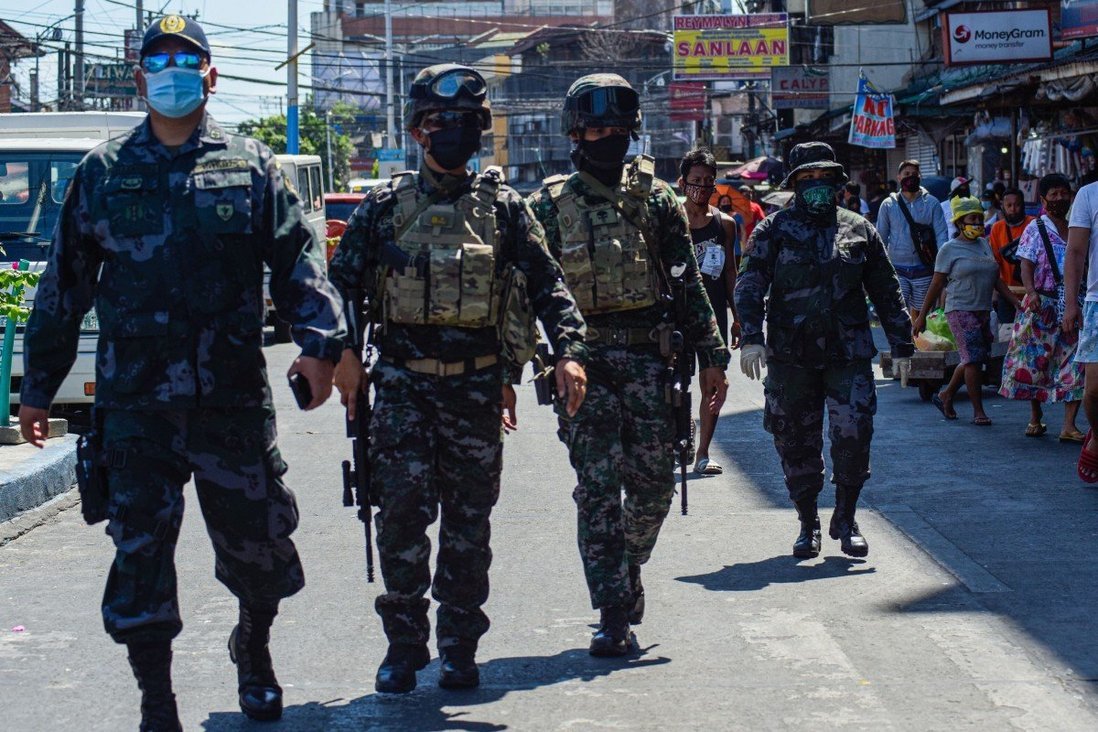 ‘Police act like kings’: anger in Philippines after killing of mother, son

President Rodrigo Duterte’s ‘war on drugs’ has been blamed for a culture of police impunity, with a Christmas prank highlighting abuses of power.

Strangely, no citizen of the Philippines is exercising their natural human right to neutralize by force every police officers who engage in illegal violence, imprison them in citizens arrest and fatally impair their ability to continue to violate the law while wearing uniforms. As long as stupid citizens do not declare a war against illegal and fatal police violence, the police organized crime in the Philippines will get worse and worse, just like in USA, Belarus and Rwanda.

In any democratic state, the role of the police is to protect the citizens. No less but much more than following the government's instructions. In any democratic state where police officers organize to commit lethal crimes against civilians and resort to violence against the law and against human rights, it is the citizen’s duty and not just their right to forcibly imprison the perpetrators and ensure they can no longer commit lethal offenses against innocent civilians.

The role of law enforcement is naturally of the police. But where the police are refraining from fulfilling their supreme duty to protect the lives of civilians and doing exactly the opposite, this is not only their right but the duty of the citizens to self-defense.

But the Philippine citizens do not exercising their democratic right and as results they are paying with their lives.

On December 15, policemen in Cebu City in the Philippines approached two men, told them they were under arrest and led them to a waiting vehicle. The two nervous men were surprised when more officers suddenly appeared, sang them a carol and then presented them with a gift basket.

It was, the police explained, their way of wishing members of the public a merry Christmas.

The bizarre prank did not go down well. Commission on Human Rights spokeswoman Jacqueline De Guia said it was “no laughing matter” and might “heighten the worry of individuals who may have developed mistrust toward law enforcers”.

Filipinos have good reason to mistrust and fear the police, who have been linked with murder, corruption and violence, especially since the start of President Rodrigo Duterte’s “war on drugs” in 2016.

The United Nations estimates more than 8,000 people have been killed in the drug war, while the Philippine human rights commission believes the number could be as high as 27,000.

Earlier this month, the International Criminal Court’s chief prosecutor said there was “reasonable basis to believe” that Duterte’s crackdown was responsible for crimes against humanity, and it would make a decision next year on opening an investigation.

The most recent instance of police brutality took place on December 20 in the town of Paniqui in Tarlac province, north of Manila, when police staff sergeant Jonel Nuezca, 46, shot and killed his neighbours Sonya Gregorio, 52, and her son Frank, 25, at close range.

Nuezca barged into their yard after Frank reportedly set off a home-made cannon – a device that makes a booming sound and is typically used to celebrate New Year. Although he was off-duty and not in uniform, Nuezca tried to arrest the young man while his mother attempted to fend him off, hugging her son tightly.

When Nuezca’s teenage daughter yelled “My father is a policeman” and Sonya replied “I don’t care”, he whipped out a gun. The last words the mother and son heard were Nuezca saying in Tagalog: “F*** you, you want me to finish you off right now?”

Aware that he was being recorded, Nuezca coolly shot each of his victims in the face, and then shot them again when they fell. In the video, a witness can be heard screaming “You’re an animal” at Nuezca, who calmly walked away with his daughter.

The video was widely circulated on social media before YouTube removed it. The hashtag #StopTheKillingsPH trended on Twitter after the incident.

Senator Panfilo Lacson, a former national chief of police, said if the video recording told the whole story, the police should show no mercy and make sure Nuezca “rots in jail” because “he’s the last policeman that they need on the force”.

Duterte condemned the killing, saying in his weekly televised address that Nuezca should not be allowed to apply for bail and “there will be hell to pay” for rogue officers. Police chief Debold Sinas said the Philippine National Police (PNP) “does not and will never condone any criminal act of our police officers”, and that this was considered an isolated incident.

Investigators have since discovered that Nuezca had a record of abuse going back 10 years, including two homicide cases which were dismissed for a lack of evidence, and several instances of grave misconduct and neglect of duty. In October, he was demoted over a 2014 extortion case in which he and other policemen had arrested two men and demanded money in exchange for releasing them. 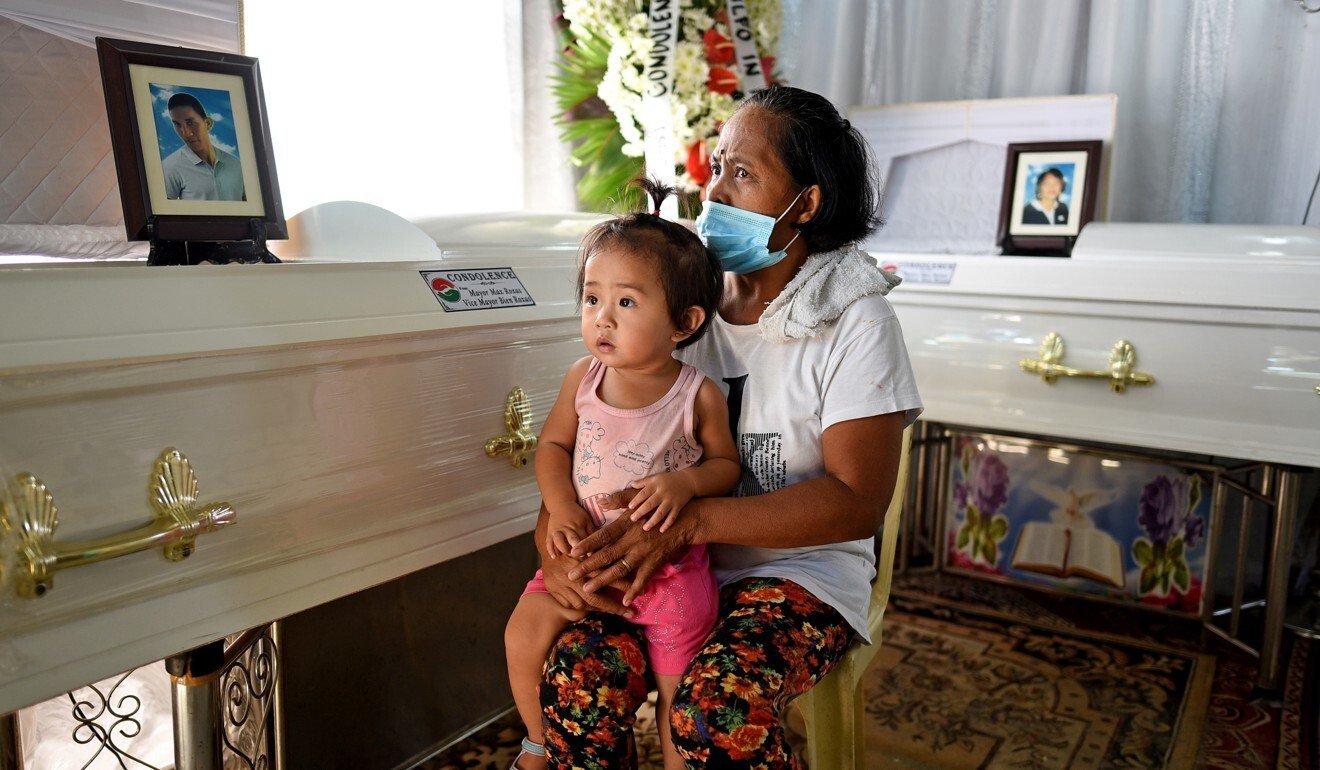 Frank Anthony Gregorio’s young daughter and his mother-in-law sit beside his coffin and that of his mother during their wake.

The PNP maintains Nuezca is an exception in the 221,000-strong force, which is slated to hire 37,000 more members this year. But for many Filipinos, he is a typical policeman. There are numerous instances, recorded on video, where police have committed crimes rather than preventing them.

In Baguio City in November, a team that included two members of an anti-drug unit dragged a 25-year-old man into a car in full view of witnesses. The next day the man’s headless body was found in a ravine.

In April, a police sergeant shot and killed an army veteran for allegedly violating quarantine. Police said the man was reaching for a gun, which they claimed they found in his bag. But the victim’s relatives said he was disabled and the gun was planted by police.

“The police act like kings,” said Manuel Mogato, a Pulitzer prize-winning reporter who has covered the police for decades. “The culture of impunity is just too much.”

He described the state of the PNP as “deteriorating and abusive”, and said the problem was “structural – from recruitment to training”.

Mogato laid the blame on Duterte, who has relied on the PNP to wage his war on drugs. The narrative in nearly all the cases was the same, the journalist said: the police conducted a “buy-bust” operation, there was a shoot-out after suspects allegedly resisted, and they wound up dead. 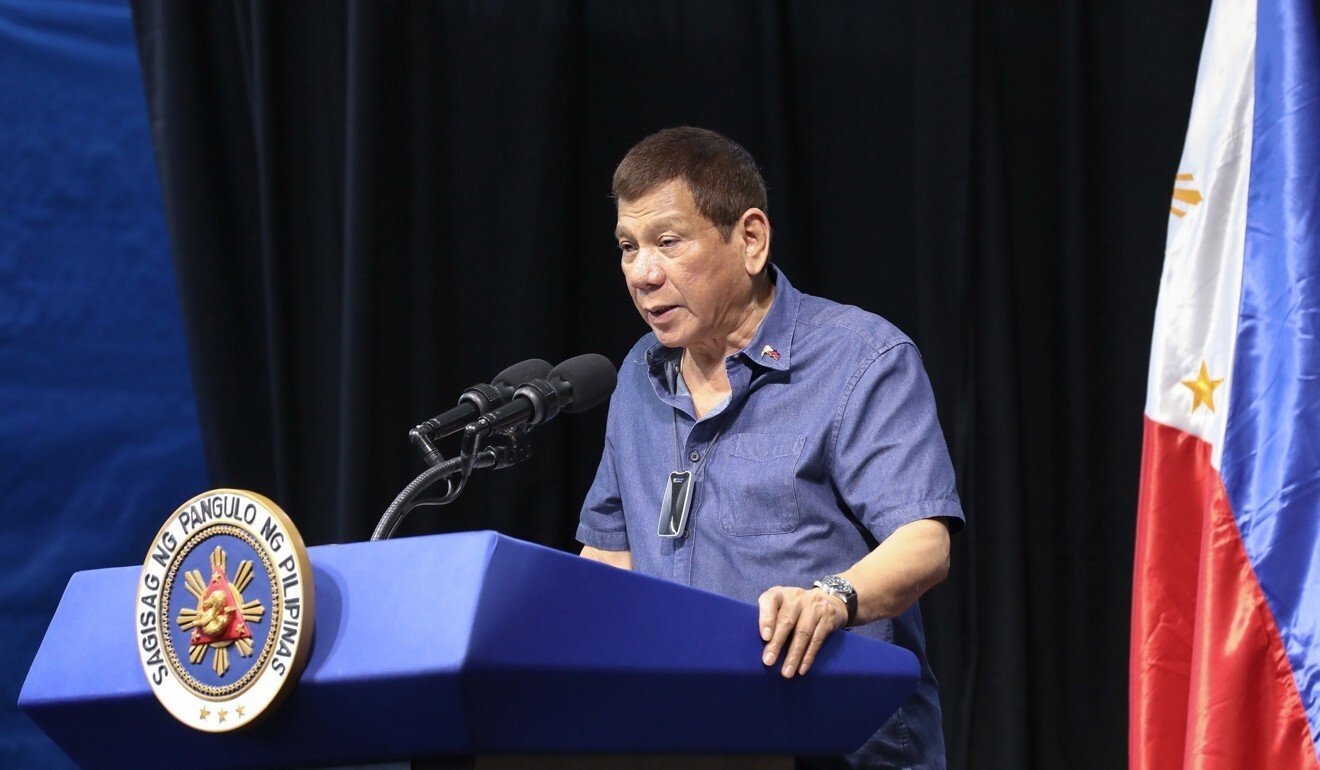 President Rodrigo Duterte speaks during an event to mark the destruction of dangerous drugs at a waste management facility in Cavite on December 3.

In a report in June, the UN Human Rights Commission said the drugs crackdown had been marked by police orders and high-level rhetoric that might be interpreted as “permission to kill”.

“Despite credible allegations of widespread and systematic extrajudicial killings in the context of the campaign against illegal drugs, there has been near impunity for such violations,” the report said.

The country’s focus on public order and national security was “often at the expense of human rights, due process rights, the rule of law and accountability”, the UN found.

Duterte himself has repeatedly castigated the police, saying in 2017 that up to 40 per cent of the force was corrupt. But that did not stop him from urging them to shoot to kill. During the PNP’s anniversary celebration last year, Duterte told police it was acceptable to receive bribes, which he called “gifts”, and promised he would protect the officers.

In response to the double murder in Tarlac, some officers said the Gregorios deserved what happened because they had provoked Nuezca, reflecting the mindset to which many recruits are exposed.

And the PNP chief gave what seemed like a menacing warning when he said he would not encourage the public to shoot videos of police abuse.

In a statement, Senator Nancy Binay noted how “rather than being the people’s assurance of law and order, lately many of our cops are becoming the face of terror and impunity, blatantly disregarding the rule of law and spitting on our values”.