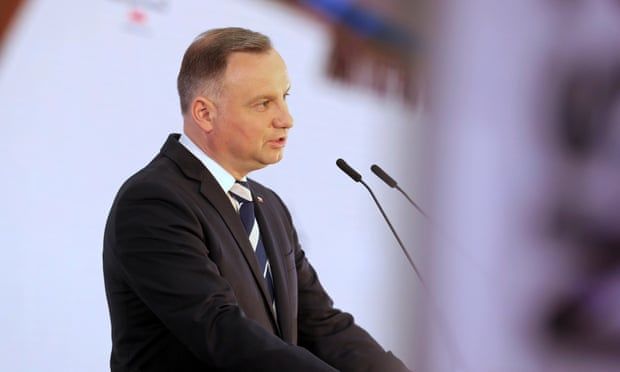 Critics say removal is largely cosmetic as chamber with members chosen by president will replace it
Polish lawmakers have approved removing a controversial disciplinary body within the country’s top court that the rightwing government has used to sanction outspoken judges and which has drawn condemnation from the EU.

Poland’s government expects the removal of the Disciplinary Chamber of the supreme court to end its spat with the EU, paving the way for an agreement that will result in Brussels’ disbursing billions of euros of frozen recovery funds for Poland.

The vote on Thursday in the lower house was 231-208, with 13 abstentions. The ruling coalition was for the move while the opposition was against it, saying the changes are largely cosmetic.

The Polish prime minister, Mateusz Morawiecki, said in parliament before the vote that EU Commission chief Ursula von der Leyen is expected to sign the agreement in Warsaw on 2 June.

Warsaw’s relations with Brussels have grown tense under the current government, largely due to the control it has taken of the judiciary, placing loyalists at top bodies and punishing judges who protested those moves.

But ties have warmed up as Poland has taken an active role in supporting Ukraine in its struggle against Russia’s invasion. Poland has taken in 3.6 million refugees from Ukraine and the government has been pushing for EU funds to accommodate and integrate the refugees.

The European court of justice last year found the Disciplinary Chamber to be in violation of the EU’s rule of law principles, urged Poland to remove it and fined Poland €1m (£850,000) a day as long as the body continues.

Critics say the change is superficial and misleading, because the controversial body will be replaced with a professional responsibility chamber at the supreme court whose members will be chosen by the president, Andrzej Duda.

The new judicial regulations still need approval from the senate, where the opposition has a narrow edge, and from Duda, who is their chief author.

It was not clear if these approvals would be granted before 2 June.
Add Comment