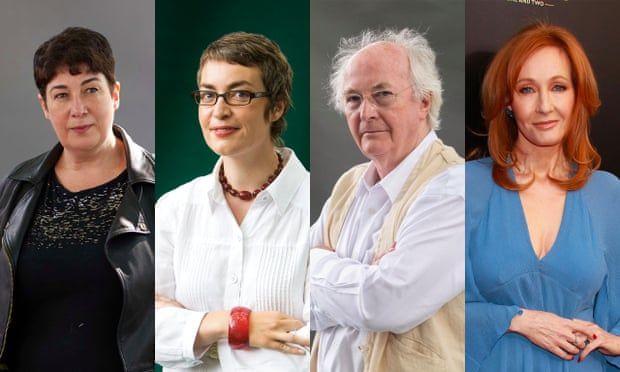 Literary world riven by conflict as trade union is accused of inappropriately taking sides in culture war
It is a literary row that threatens to consume the very organisation set up to protect authors’ rights. And, in spite of the involvement of three prominent names in children’s books, it has already prompted outbursts of unmistakably adult fury.

Harry Potter creator, JK Rowling, Philip Pullman, author of His Dark Materials, and the poet Kate Clanchy, are among the cast members of the drama that continues to rock the Society of Authors, not to mention Joanne Harris, author of the bestselling novel Chocolat, who chairs the society’s management committee.

This weekend, fresh claims have surfaced that the SoA, Britain’s largest trade union for published writers, illustrators and translators, is inappropriately taking sides in divisive cultural rows. Clanchy, an author who was heavily criticised last summer for language used in her memoir about her years as a teacher, is talking to a lawyer about her legal position, she has revealed to the Observer. She and her supporters, including publishing doyenne Carmen Callil, are also calling for an independent report into the society’s processes.

Clanchy argues she was personally targeted, both by the organisation and individually by Harris, as her publisher Picador withdrew backing for her Orwell prize-winning book. Her memoir, Some Kids I Taught and What They Taught Me, has since been reissued by Swift Press in revised form. It had contained descriptions of some of the children in Clanchy’s classes that were later considered stereotypical or derogatory. Its tone was also described as condescending.

Clanchy apologised for any offence caused and amended her work. She has since talked of a period of mental ill health caused by the impact of the incident.

“Writers have always been vile to each other, but they used to be vile in dark corners. Now it appears everywhere,” said Clanchy this weekend. “I don’t believe the Society of Authors has followed its own guidelines recently. It is time for an independent review. It has to stop behaving like a gentleman’s club from the 1920s and start having proper, transparent complaints procedures.”

The society lost an illustrious president this year when Philip Pullman stepped down from the role after publicly decrying attempts to censor Clanchy’s book.

Clanchy also claims that, although she was not a member of the society, Harris contacted her directly, urging her to apologise for her memoir. The poet added that both she and Pullman regret his initial reference to the kind of censorship inflicted by the Taliban, in a tweet that ultimately led to his resignation in March.

Despite a call for unity from the Society of Authors this weekend, the battle over its leadership style looks likely to rage on. Last week, Harris was caught up in controversy when she appeared, in remarks she subsequently rewrote, to parody online comments made by Rowling in support of freedom of speech and Salman Rushdie, the victim of a knife attack during an event in New York.

On Friday, the SoA attempted to turn the page by avowing its commitment to free speech. “We again call on all authors to converse with dignity and respect and to unite to work together on the issues which affect us all,” a statement on its website reads. The detailed response also says that the society has investigated allegations it failed to support gender critical members but has found “no basis for complaint”.

But two rival letters have been circulating among members of the society since Harris’s Twitter post about literary death threats. An initial open letter, hosted on writer Julie Bindel’s Substack page, called on Harris to resign because the society had “failed to come to the defence” of threatened authors such as Gillian Philip, Rachel Rooney, Onjali Rauf, Bindel and Clanchy. A rival letter, released by the author Melinda Salisbury, defends Harris’s reputation as “a stalwart, fair, dedicated and passionate chair”.

On Thursday, Bindel’s Substack page carried a follow-up letter disputing the arguments of Harris’s defenders and repeating the claim that gender-critical writers do not receive enough support. Harris, it argued, has a right to her own views but should “separate those views from her role at the Society of Authors”.

Novelist Amanda Craig is one of the authors judged to have been failed by the SoA, according to its critics. Two years ago, Craig was dropped as a judge of the Mslexia writing competition because she had signed a letter supporting JK Rowling. Craig wrote to the competition organisers asking for her fee to be paid anyway and showed her letter to an SoA official before sending it.

According to those who challenge the SoA’s handling of freedom of speech issues, Craig received no support from Harris during the incident.

The SoA, however, says: “The allegations against Joanne Harris as chair seem to be that she has failed to engage with authors, has joined in smear campaigns against them and has been unwilling to represent their interests. This is not a fair representation of the engaged and passionate chair that the management committee and members see.”
Add Comment