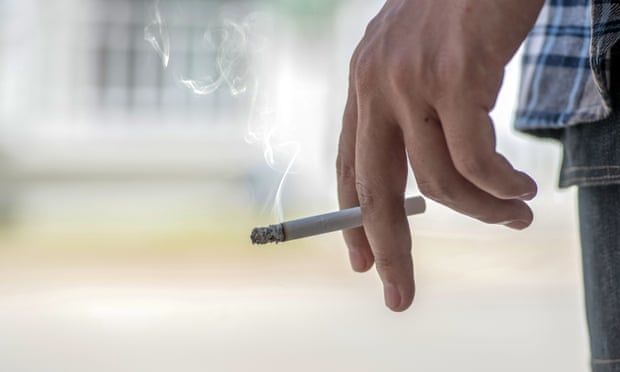 Delayed review, which also suggests new taxes on tobacco firms, reportedly faced pushback from ministers
Plans to raise the legal smoking age to 21 and place new taxes on tobacco companies could be announced on Thursday, amid splits in government over the radical recommendations.

The delayed review by Javed Khan, the former chief executive of Barnardo’s, will be released on Thursday. It was commissioned by the health secretary, Sajid Javid.

Khan has denied speculation by some sources that the review’s delay is down to pushback from ministers and said there had been extra work to do. Challenges with the government grid have also played a part in its delay.

However, the Guardian understands there is scepticism across government about changes to the legal age limit, as well as further tax rises. The plan is likely to go out to consultation after details are released.

Thursday’s launch, which underlines the review’s independence, will be attended by the chief medical officer, Sir Chris Whitty, the health minister Maggie Throup and the shadow health minister Andrew Gwynne.

One industry source said the early version of the review had been “very radical” including a tobacco levy, and an option to consider the New Zealand approach of increasing the purchase age by a year, each year, with an aim to totally ban tobacco sales.

A government source said there was clearly an option for ministers not to accept the findings of the review. A second source said as a “general point of principle, the view has always been that 18 is widely recognised as the age of adulthood”.

David Canzini, the influential deputy chief of staff in Downing Street, has advised Boris Johnson to get rid of as many policies as possible that may be unpopular with MPs or traditional Conservative voters, which his former boss Sir Lynton Crosby has previously described as getting the “barnacles off the boat”.

After the junking of parts of Johnson’s obesity strategy, Javid has been keen to keep the target of making the UK smoke-free by 2030, which also has the potential to be ditched as a “nanny state” policy that Tory backbenchers oppose.

In an interview before his review, Khan warned that the target to have just 5% of people smoking by 2030 would not be met without action from the government to restrict sales.

There are 6 million smokers in England and tobacco use increased by 25% among the under-30s during the pandemic, a rise of more than 600,000 smokers in that age bracket. Overall, rates have been falling for the past two decades to less than 15%.

New Zealand has introduced a progressive ban on cigarette and tobacco sales, which means that anyone born after 2008 will not be able to buy the products.

Gwynne, who has taken a close interest in the review, said it could be a missed opportunity for change. “The Conservative government appears to have choked off their own public health agenda,” he said. “So much for ‘health week’.”

A Department of Health and Social Care spokesperson said: “Tackling issues such as smoking is a priority for the office for health improvement and disparities, and a key part of the government’s levelling up agenda. This is why we launched the independent review of our bold ambition to make England smoke-free by 2030.

“The review will provide independent, evidence-based advice on potential interventions that will inform our approach to tackling the stark health disparities associated with tobacco use – and we look forward to seeing the report in due course.”

Johnson has aimed to put a new focus on health and the NHS this week as he battles to save his premiership.

At his cabinet meeting on Tuesday morning, hours after winning a no-confidence vote in his leadership, Johnson made the case anew for national insurance rises aimed at tackling the NHS backlog – emphasising the difference that faster diagnosis was making to the post-Covid waiting lists for treatment.
#Boris Johnson  #Johnson  #Covid
Add Comment