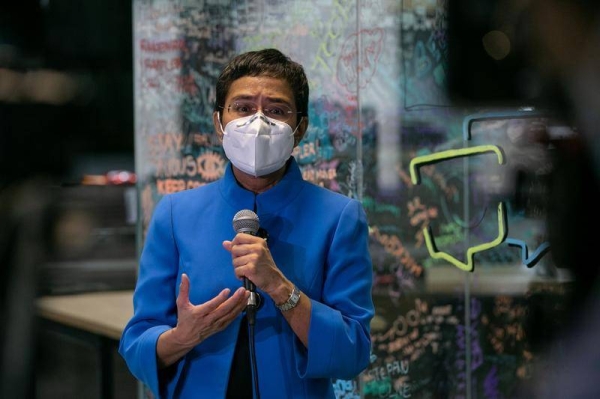 Listen to the article
0:00 / 0:00
Voice by MediaWorks
Philippines authorities have again ordered the shutdown of an investigative news site founded by Nobel Peace Prize laureate Maria Ressa.
Rappler is one of the few Philippines media outlets critical of President Rodrigo Duterte's government.

The regulator's ruling comes just before Duterte leaves office and is succeeded by his ally Ferdinand Marcos Jr. who won election in May.

Rappler said it wouldn't be closing and would challenge the order in court.

"We will continue to work and to do business as usual," Ms Ressa told reporters on Wednesday. "We will follow the legal process and continue to stand up for our rights. We will hold the line."

She said the ruling had come after highly irregular proceedings, and that the site couldn't count on rule of law anymore.

The Philippines Securities and Exchange Commission said in a statement that a decision to revoke the company's licence to operate had been upheld following an appeal - because it and the courts had concluded that Rappler's funding model was unconstitutional.

The regulator first issued an order against Rappler in 2018, invalidating the news organisation's credentials because - it said - the company had sold control of itself to a foreign entity in breach of foreign ownership restrictions in Philippines media.

Rappler has been fighting the ruling ever since. It denies its US investor funding breaks the law.

In 2015 Rappler received funding by the Omiydar network - a philanthropic investment company set up by Pierre Omiydar, the billionaire founder of Ebay - but denied it ceded foreign control. Three years later it donated the investment to Filipino staff of Rappler to prove it had no controlling stake in the business.

Ms Ressa said on Wednesday the SEC's ruling was the latest blow in a six-year campaign from authorities in response to Rappler's hard-hitting reporting.

"We have been harassed, this is intimidation, these are political tactics and we refuse to succumb to them," she said.

Human Rights Watch said the "spurious" move from the SEC was an effort to "shut up Nobel laureate Maria Ressa, and shut down Rappler, by hook or by crook."

Rappler has published extensively on President Duterte's deadly war on drugs, as well as taking a critical look at issues of misogyny, human rights violations and corruption.

Ressa, who co-founded the site in 2012, faces at least seven criminal and civil cases which she says are politically challenged. She is appealing her conviction in 2020 for libel - a case seen as a test of Philippine press freedom.

She was awarded the Nobel Peace Prize last year - along with a Russian journalist - for her journalistic work with Rappler. She was commended for using freedom of expression to "expose abuse of power, use of violence and growing authoritarianism in her native country, the Philippines".

The order against Rappler comes amid growing concerns about what the new Marcos government will be like.

Marcos Jr. is the son of the nation's former dictator who persecuted journalists, human rights activists and political opposition during his decades in power.

Journalists critical of the government are also routinely abused in the country. Several whistle blower accounts have emerged of 'troll farms' set up to harass and intimidate journalists and political opponents

Reporters without Borders (RSF) ranks the Philippines 147 out of 180 countries on its Press Freedom Index, down 9 places from 2021.
Add Comment