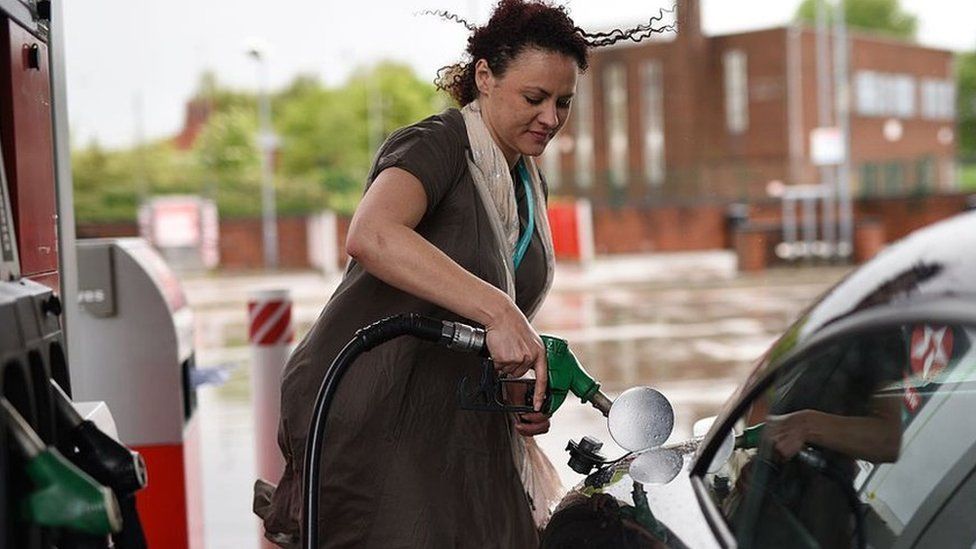 The price of petrol saw its biggest daily jump in 17 years on Tuesday with a rise of more than 2p a litre.

The RAC motoring group said the average cost of filling a typical family car with petrol was now £99.40 and could exceed £100 as soon as Thursday.

Soaring fuel prices have been driven by the war in Ukraine and moves to reduce Europe's dependence on Russian oil.

With food and energy bills also surging, many households are under pressure.

The average price of petrol rose to 180.73p per litre on Tuesday, the RAC said.

In March, the government announced a 5p per litre cut to fuel duty to help reduce costs for motorists.

However, motoring groups have raised concerns retailers are not passing on the cut to customers.

On Wednesday the prime minister's official spokesman said the government was "not confident" this was happening at all petrol stations.

He said the government was "continuing to look at all possible options" and "transparency may have an important role to play" in ensuring the cut is passed on.

It comes after a government source told the BBC a plan to name and shame petrol stations that fail to do so is "still in the works".

The government says any increases in VAT receipts it gets from rising fuel prices are likely to be largely offset by reduced household spending and VAT on other items.

The Competition and Markets Authority (CMA) said if it found sufficient evidence the 5p fuel duty cut had not been passed on to drivers, then it would launch an investigation that could lead to fines for offending retailers.

RAC fuel spokesperson Simon Williams said the accelerating costs of forecourt fuel was "unprecedented", adding it appeared prices were "still some way from the peak".

But he said while the average price of diesel is heading towards £2 a litre, the cost of wholesale petrol had unexpectedly dropped by about 5p a litre on Tuesday, which if sustained, could stem the flow of "daily record petrol prices".

Retailers base their prices on the wholesale cost of petrol and diesel but there is typically a two-week lag for pump prices to reflect any changes in wholesale prices due to the time it takes for fuel to reach forecourts.

Mr Williams said the RAC's fuel watch data showed Asda had hiked its average petrol price by nearly 5p a litre in a single day, which he said was "unheard of".

In response, Asda said wholesale fuel prices had increased "at an unprecedented rate" and "we will do all we can to minimise the impact of rising wholesale prices on our customers".

Meanwhile, some forecourts are already selling petrol above £2 per litre, according to price comparison website PetrolPrices.

The highest price was found to be 202.9p at BP sites on the A1 near Sunderland, the M4 near Chippenham in Wiltshire and the M6 near Burton-in-Kendal, Cumbria.

The AA motoring group said the 2p litre rise was a "huge shock", but said the speculation that petrol prices could rise to £2 per litre on average "just gives the fuel trade licence to pile on extra cost and the misery". 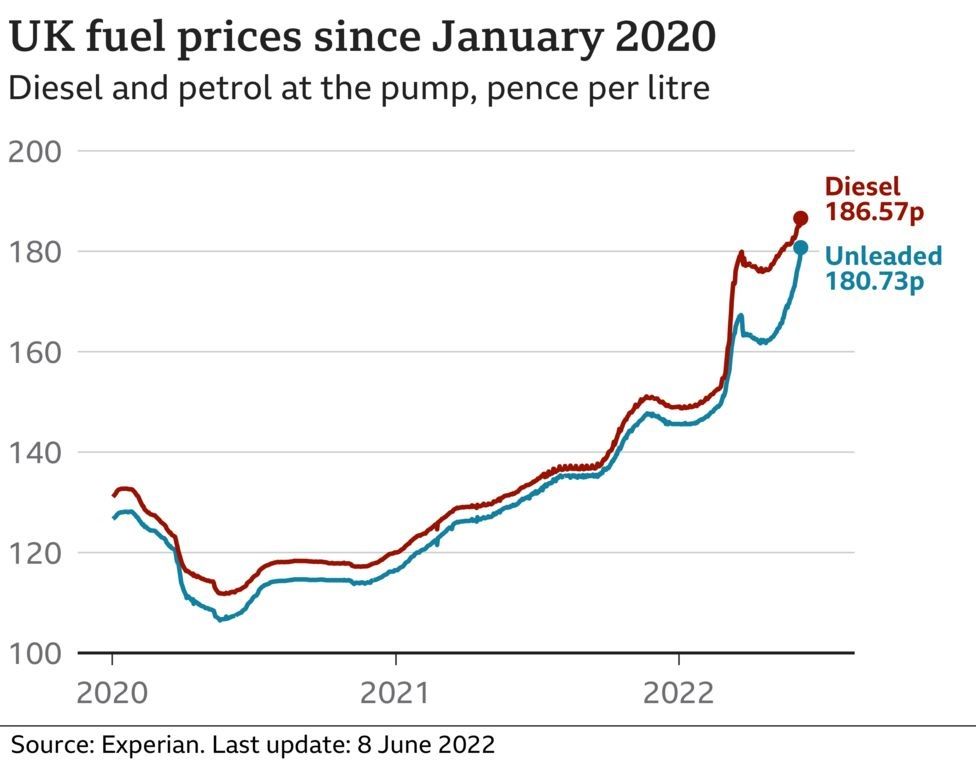 Fuel prices fell at the beginning of the Covid pandemic as many businesses temporarily closed and demand for energy collapsed.

But as global economies recovered, prices rose again and have surged further after Russia's invasion of Ukraine.

Changes in prices at the pump are mainly determined by crude oil prices and the dollar exchange rate, because crude oil is traded in dollars.

Russia is one of the world's major oil exporters and it is being targeted by economic and trading sanctions, which has led to potential supply concerns, pushing up oil prices.

EU leaders have said they will block most Russian oil imports by the end of 2022 to punish Moscow, which has also had an effect on prices.

The UK - which gets 8% of its oil needs from Russia - has pledged to phase out Russian oil by the end of the year and though it is not as dependent on Russian oil as the EU is, it is impacted when global prices rise.

Energy and food prices are also being driven higher by the war in Ukraine.

UK consumer prices are rising at their fastest rate for 40 years, with millions hit by an unprecedented £700-a-year increase to their energy bills in April.

Inflation - the rate at which prices rise - hit 9% in April and is expected to continue to rise this year.