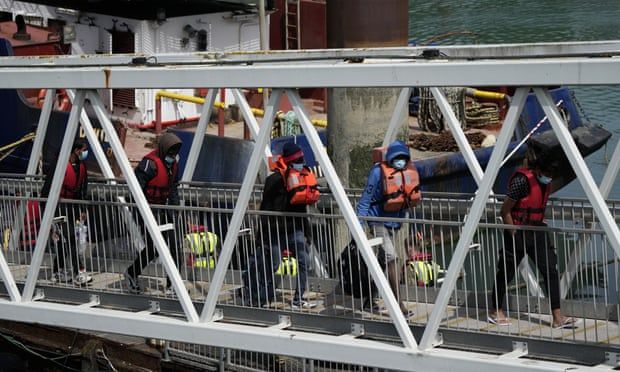 People arriving in UK on small boats to be electronically tagged

Under a 12-month pilot, which began on Wednesday, some people arriving in the UK in small boats or in the back of lorries will be electronically tagged.

Critics say the “draconian” move will do nothing to stop people from taking risky journeys to reach the UK in search of asylum.

Boris Johnson defended the plans on Saturday morning, saying it was essential that people did not simply “vanish” into the rest of the country.

Under the plans, asylum seekers will have to regularly report in person to authorities and may be subject to a curfew or excluded from certain locations, while failure to do so could result in them being returned to detention or prosecuted.

Enver Solomon, the chief executive of the Refugee Council, said: “It’s appalling that this government is intent on treating men, women and children who have fled war, bloodshed and persecution as criminals.

“This draconian and punitive approach not only shows no compassion for very vulnerable people; it will also do nothing to deter those who are desperately seeking safety in the UK.”

The prime minister, speaking to reporters at RAF Brize Norton after returning from an unannounced visit to Kyiv, said: “This is a very, very generous, welcoming country. Quite right too. I am proud of it, but when people come here illegally, when they break the law, it is important that we make that distinction.

The Labour leader, Keir Starmer, accused the government of “chasing headlines”. “What I want is a serious response because nobody wants these journeys across the Channel to be made, these perilous journeys,” he said during a visit to Wakefield, in West Yorkshire.

“Everybody wants to clamp down on the gangs. That requires grownup work with the French authorities and upstream work to actually tackle these gangs. You don’t do that if you’re a government that is asking the National Crime Agency to make cuts.”

The Home Office said the trial programme would test whether electronic monitoring assists in maintaining regular contact with those given bail and helps to progress their claims more effectively.

The first people to be tagged under the programme were likely to be those who avoided removal to Rwanda this week for processing, the BBC reported.

It comes after the European court of human rights (ECHR) granted an injunction on Tuesday that resulted in the cancellation of a chartered flight to Kigali, the capital of Rwanda.

The home secretary, Priti Patel, accused the ECHR of being politically motivated in its “absolutely scandalous” decision.

In an interview with the Telegraph, she said: “You’ve got to look at the motivation. How and why did they make that decision? Was it politically motivated? I’m of the view that it is, absolutely.

“The opaque way this court has operated is absolutely scandalous. That needs to be questioned.

“They’ve not used this ruling previously, which does make you question the motivation and the lack of transparency.”

The justice secretary, Dominic Raab, has suggested that new laws could ensure interim measures from the Strasbourg court could in effect be ignored by the government.

New figures revealed that the number of people crossing the Channel to reach Britain this year has passed 11,000.

The UN refugee agency (UNHCR) has previously said that “a clear majority” of people arriving in the UK by small boat should be considered to be refugees fleeing conflict or persecution.

While the home secretary told MPs and peers last year that 70% of people making the crossing were “single men who are effectively economic migrants”, and the government has repeatedly referred to them as “migrants”, the UNHCR says government data challenges this claim.

On Thursday, 146 people on four small boats were brought to Britain.

The daily number has decreased steadily throughout the week after a high of 444 on Tuesday. That was the highest number since 562 on 14 April.

At least 48 people were brought ashore at Dover on Thursday.