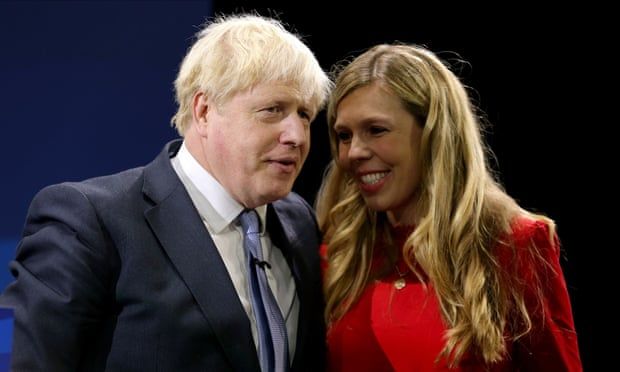 Gathering was said to have taken place on PM’s birthday but not included in Sue Gray’s report
Labour has called for an investigation into leaked text messages suggesting there was a second gathering in Boris Johnson’s Downing Street flat during lockdown, held by his wife, Carrie, on his birthday.

The emergence of new evidence of an event hosted on 19 June 2020, which was not mentioned in the Partygate report by Sue Gray, sparked accusations of a cover-up and calls for No 10 to “come clean”.

The event has not been denied, but Carrie Johnson’s spokesperson said that Gray had been made aware of the texts “as part of her exhaustive inquiry into alleged breaches” of Covid rules.

They added: “Staff were given ample opportunity to present evidence including these messages, and all relevant information was passed to the Metropolitan police for investigation.

“The lunchtime gathering in the cabinet room on 19 June 2020 was subsequently found to be in breach and a fixed-penalty notice was issued to Mrs Johnson among others, for which she apologised unreservedly and promptly paid the fine.”

It was alleged that a Downing Street aide received a text from Johnson’s wife confirming that she was with two male friends in the flat, where the prime minister later joined them.

At the time, strict lockdown rules meant indoor socialising was banned, but people could meet up in groups of six outdoors. An exemption to meeting was made where the gathering was “reasonably necessary … for work purposes”.

The gathering came hours after the birthday celebration held in the cabinet room, for which both Johnsons were fined by police. It is thought to be separate to a third event on Johnson’s birthday with his relatives, which took place in the Downing Street garden and is thought to have adhered to the rules at the time.

It was previously reported that a gathering was held in the flat on 13 November 2020, with food and alcohol available and loud Abba music being played. Gray admitted she stopped investigating that particular event when the Met started their invesetigations, and chose not to pursue her inquiry afterwards. Tory MPs have expressed anger at the revelation.

Angela Rayner, Labour’s deputy leader, said the text messages had been suppressed and that the public “deserve the truth about why the holding of a lockdown party in the prime minister’s flat on his own birthday has not been made public until now”.

She added that the revelation “raises new questions about potential misconduct in public office, which must now be subject to proper and genuinely independent scrutiny” and that “this looks like yet another cover-up”.

Rayner called for the messages to be given to MPs on the privileges committee, who are expected to begin their investigation into whether the prime minister misled parliament by initially denying any Covid rules had been broken.

In the letter, Rayner also said Downing Street had previously denied that such a gathering took place, and asked whether any other senior civil servants attended it.

A Cabinet Office spokesperson defended the integrity of Gray’s report, saying it was “impartially conducted and its contents represent the findings and conclusions of the investigation team alone”.

Gray made reference to the cabinet room gathering in her report, saying it lasted for 20 minutes and that those who attended ate food and drank alcohol. Photos were published of Johnson, the cabinet secretary, Simon Case, and the chancellor, Rishi Sunak.

Her long-awaited findings, published on Wednesday, made no reference to any other gathering that day and only once mentioned the prime minister’s wife in relation to a different event.

However, the report did hint that other details might emerge, saying: “Given the piecemeal manner in which events were brought to my attention, it is possible that events took place which were not the subject of investigation.”

The Sunday Times reported that a Downing Street aide with a copy of the texts from Carrie Johnson wrote to the cabinet secretary, Simon Case, stating they had their offer to share the messages with Gray’s team ignored.

A Cabinet Office source said it was categorically not true that such evidence was ignored. They added that the exchange with the aide about the material was part of the information that had been provided to police.

However, the claims threaten to reignite anger over the Partygate scandal, under which the prime minister has sought to draw a line.

A government source admitted that Gray’s report had not set off the “political implosion” some anticipated, but added that the consequence would probably lead to “a gradual drip” of other damning details.

Tory MPs thought to have submitted a no-confidence letter in the prime minister agreed. “It’s bad,” one said. “This is never going to go away. There’s going to be a steady stream of new revelations. It’s just going to keep on!” Another speculated there would be a “drip, drip, drip” of further evidence.

A No 10 spokesperson said: “Sue Gray and the Metropolitan police have completed their inquiries. The prime minister cooperated fully with both investigations.”
#Boris Johnson  #Johnson  #Covid
Add Comment