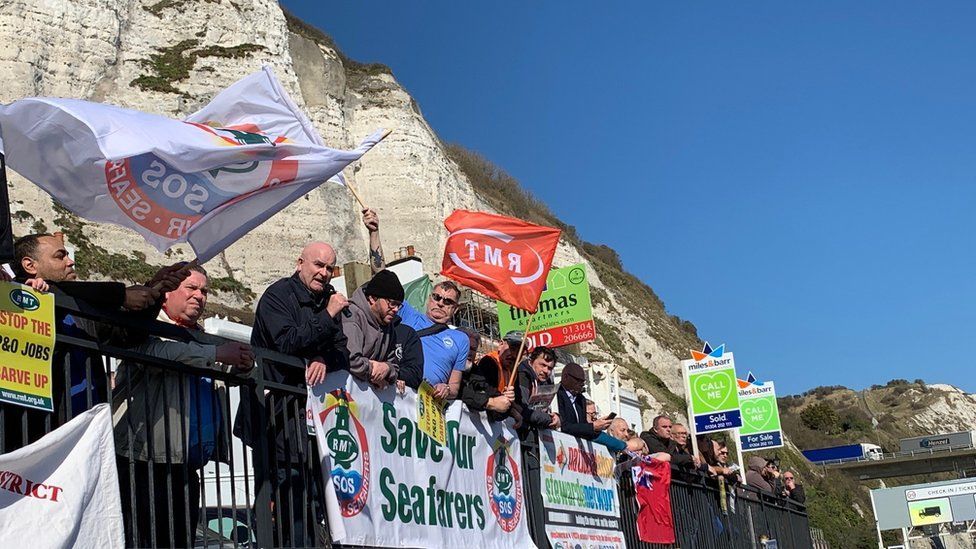 All P&O Ferries contracts across government will be reviewed in response to the way it sacked 800 workers.

Staff have been protesting after many were told without warning by video message on Thursday that it would be "their final day of employment".

In a letter to the company, Transport Secretary Grant Shapps said he was "deeply concerned" at the move and questioned whether it was legal.

P&O said it was a "last resort" to save the business.

Passengers have been left stranded with services cancelled since the announcement. The ferry company said it was aiming to have the first ones "running again in the next day or two as we lose £1m a day for each day they are not moving".

A Department for Transport spokesperson could not provide details on the current value of government contracts awarded to P&O Ferries, but Labour Party analysis of the public sector contracts database Trussle found the company had received £38.3m in taxpayer-funded contracts since December 2018.

One government contract for freight between Tilbury and Zeebrugge for nine months was worth £10.9m.

Mr Shapps urged the company to pause the redundancies announced and instructed the Maritime and Coastguard Agency to inspect all vessels to make sure replacement crews "rushed through" were safe to go to sea.

He has also asked the Insolvency Service to look at the laws around notification requirements to see if P&O followed correct and legal processes so the government "can consider if further action is appropriate."

Protests have been staged in Dover, Liverpool, Hull and elsewhere in the UK against the P&O redundancies, while the vessels stay docked at ports and ferry cancellations cause travel disruption.

Mr Kwarteng's letter to its boss Peter Hebblethwaite says the company "appears to have failed" to follow the correct process for making large-scale redundancies, which would include consulting with unions and staff representatives and notifying him through the Insolvency Service and the Redundancy Payment Service.

The letter says failure to notify is "a criminal offence and can lead to an unlimited fine".

Mr Kwarteng's questions to P&O Ferries include asking for details on the exact number of redundancies and how many of these involved any consultation, as well as the location of work for each staff member dismissed.

Additionally, he asked if staff made redundant were offered alternative roles directly for P&O Ferries or similar roles on new terms and conditions through an agency.

Workers have spoken of their "utter dismay" after hearing the news and of feeling abandoned by the company.

Andrew Smith, who had worked for the company for 22 years, said: "It's our lives. It's how our families have grown up, knowing that this is what we do, and it's just been turned on its head within a matter of hours."

And James, who has worked for P&O Ferries in Dover for about four years, said all he received "was a three minute pre-recorded message saying we are out of a job. Nothing else."

"It was a complete surprise. I would have understood if it was at the height of Covid, but now we're seeing the end of travel restrictions and the start of summer bookings. So this has come completely out of the blue," he said.

"It is particularly depressing that this should happen given the millions of pounds of British taxpayer support P&O companies received from the furlough scheme," he wrote.

P&O Ferries is owned by Dubai-based DP World which also owns ports at London and Southampton.

In a new statement on Friday, P&O Ferries said: "We took this difficult decision as a last resort and only after full consideration of all other options but, ultimately, we concluded that the business wouldn't survive without fundamentally changed crewing arrangements, which in turn would inevitably result in redundancies."

The RMT union labelled the move one of the "most shameful acts in the history of British industrial relations".

Its national secretary Darren Procter told a crowd of about 250 demonstrators in Dover: "We're going to make sure our workers get back on board their vessels."