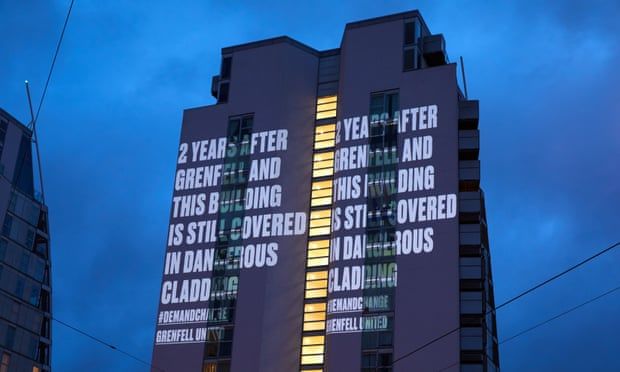 Ministers have sought to help people trapped in flats they cannot sell or remortgage by changing advice on fire safety paperwork for lower-rise blocks, although Labour and leaseholder groups have warned that the plan is too vague.

In a statement released at the same time as a Commons debate on the building safety bill, which seeks to tackle the safety and regulatory repercussions of the 2017 Grenfell Tower fire in London, the housing and communities department announced the change.

Following expert advice by a group led by Dame Judith Hackitt, who reviewed building regulations after the Grenfell disaster, people living in blocks below 18 metres in height will no longer be advised to have an external wall survey, or EWS1 certificate, before they sell their flats, which has been standard since Grenfell.

Many people seeking to sell or remortgage have found their building does not have an EWS1, a document that certifies that a block’s construction is free of combustible materials. Some leaseholders have been obliged to embark on extensive remedial works to gain the certificate.

The Ministry of Housing, Communities and Local Government argues that there is no systemic fire risk in such lower-rise blocks, and that work can be limited to less expensive measures such as fitting alarms or sprinklers, rather than the removal of cladding.

But Labour and pressure groups warned that it remained to be seen whether the announcement would make a significant difference.

Lucy Powell, the shadow housing secretary, said: “After previous announcements on EWS have utterly failed to help residents, the limited information available in today’s announcement means we cannot know whether this will make any difference to leaseholders whose homes are unsellable, uninsurable and unmortgageable.”

The End Our Cladding Scandal group said it cautiously welcomed the announcement, but warned that in the past mortgage lenders had not listened to similar advice. A spokesperson said: “At every turn the government has sought to find solace in the market even though it has been abundantly clear for years that the only body truly capable of standing up to the vested interests in the leasehold, construction and insurance sectors, and ending this living nightmare, is the government itself.”

Robert Jenrick, the communities secretary, described the new advice as “a significant step forward” for leaseholders who had had problems selling their homes.

Previously, ministers said that blocks under 18 metres in height needed an EWS1 check only if they had certain particularly worrying types of cladding, but the check had become the default for most buildings.

Stephen McPartland, the Conservative MP for Stevenage, who has been a regular critic of the government over its response to the cladding issue, told MPs during the debate on the building safety bill that Jenrick had “created a market failure” with the previous advice.

He said: “[The change] could reverse some of the damage he did, but it will need to be put into legislation to provide real, practical support to leaseholders, not just rhetoric.” Without proper action, McPartland said, the change risked being no more than “weasel words”.

The MP also requested information on the position for people in lower-rise buildings who faced significant bills due to work necessitated by EWS1 checks. Officials hope that in many cases, if no work has begun, leaseholders could be spared having to pay since the work is longer needed.