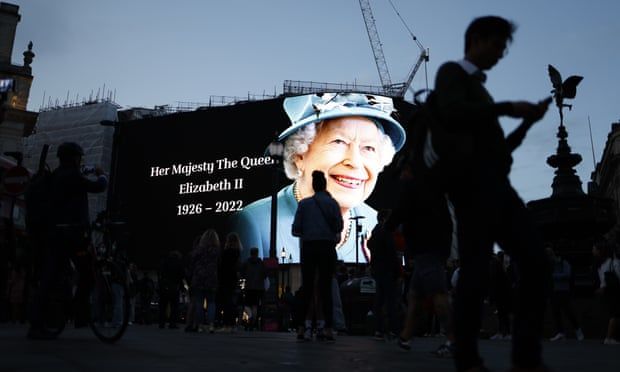 The nation is grieving with “profound sadness” over the passing of the Queen, whose “steadfast loyalty, service and humility” sustained the United Kingdom for over 70 years, the archbishop of Canterbury has said, as tributes poured in for the monarch.

Liz Truss, who met the Queen two days ago to be asked to form a government – led the tributes in her second address outside Downing Street since taking office.

“The death of Her Majesty the Queen is a huge shock to the nation and to the world,” she said in a brief and sombre speech that ended with the solemn words “God save the King”.

She said: “Today the crown passes, as it has done for more than 1,000 years, to our new monarch, our new head of state, His Majesty King Charles III.”

The Labour leader, Sir Keir Starmer, said the nation should treasure her love as well her mourn the loss. “Our longest-serving and greatest-ever monarch. Above the clashes of politics, she stood not for what the nation fought over but what it agreed upon. In crisis, she reassured us. Reminding us that we are all part of something that stretches back through time. A symbol of the best of us,” he said.

Truss’s predecessor as prime minister, Boris Johnson, said: “This is our country’s saddest day. In the hearts of every one of us there is an ache at the passing of our Queen, a deep and personal sense of loss.

“A bright and shining light that has finally gone out … she seemed so timeless and so wonderful that I am afraid we had come to believe, like children, that she would just go on and on.”

The death of the Queen, who ascended to the throne after the second world war, brings to an end the longest reign of any British monarch – seven years longer than Queen Victoria.

She continued to carry out her formal duties until days before her passing, a reflection of the faith she had in the role of the monarchy in Britain, said Justin Welby, the archbishop of Canterbury.

“Through times of war and hardship, through seasons of upheaval and change, and through moments of joy and celebration, we have been sustained by her late Majesty’s faith in what and who we are called to be,” he said.

“As we grieve together, we know that, in losing our beloved Queen, we have lost the person whose steadfast loyalty, service and humility has helped us to make sense of who we are through decades of extraordinary change in our world, nation and society.”

News of concern over the Queen’s health emerged in a Buckingham Palace statement at 12.32pm on Thursday. A sombre mood descended on parliament after the Commons Speaker, Lindsay Hoyle, interrupted a speech by the SNP’s Westminster leader, Ian Blackford, to break the news.

“I know I speak on behalf of the entire house when I say that we send our best wishes to Her Majesty the Queen and that she and the royal family are in our thoughts and prayers at this moment,” Hoyle said.

The former prime minister John Major described the Queen as a leader, “selfless and wise, with a wonderful generosity of spirit”, who “embodied the heart and soul of our nation”.

Tony Blair said the nation had lost “not just our monarch but the matriarch of our nation, the figure who more than any other brought our country together, kept us in touch with our better nature, personified everything which makes us proud to be British”.

He added: “We will mourn her. We will miss her. But our overwhelming sentiment will be of gratitude, profound, heartfelt and sincere thanks for what she did, what she stood for, for the life she lived and for what she gave us.”

The Democratic Unionist party leader Sir Jeffrey Donaldson remembered her “groundbreaking” role in reconciliation in Ireland after she visited the Republic in 2011, the first reigning monarch to do so. “Her Majesty led by example in Northern Ireland and reached out the hand of friendship to help with the reconciliation process. We are duty bound to build on that foundation,” he said.

The Harry Potter author, JK Rowling, said some may find an outpouring of British shock and grief “quaint or odd”, but “millions felt affection and respect for the woman who uncomplainingly filled her constitutional role for 70 years”.

She added: “Most British people have never known another monarch, so she’s been a thread winding through all our lives. She did her duty by the country right up until her dying hours, and became an enduring, positive symbol of Britain all over the world. She’s earned her rest.”

The Match of the Day presenter Gary Lineker said it was a “terribly sad day”.

Frank Bruno, the former boxing champion, said the Queen was the “Matriarch Mother of our nation”.

Ozzy Osbourne posted on Instagram: “I mourn with my country the passing of our greatest Queen.”

Paddington Bear, who took tea with the Queen in a video to celebrate her jubilee, also paid tribute in a tweet.