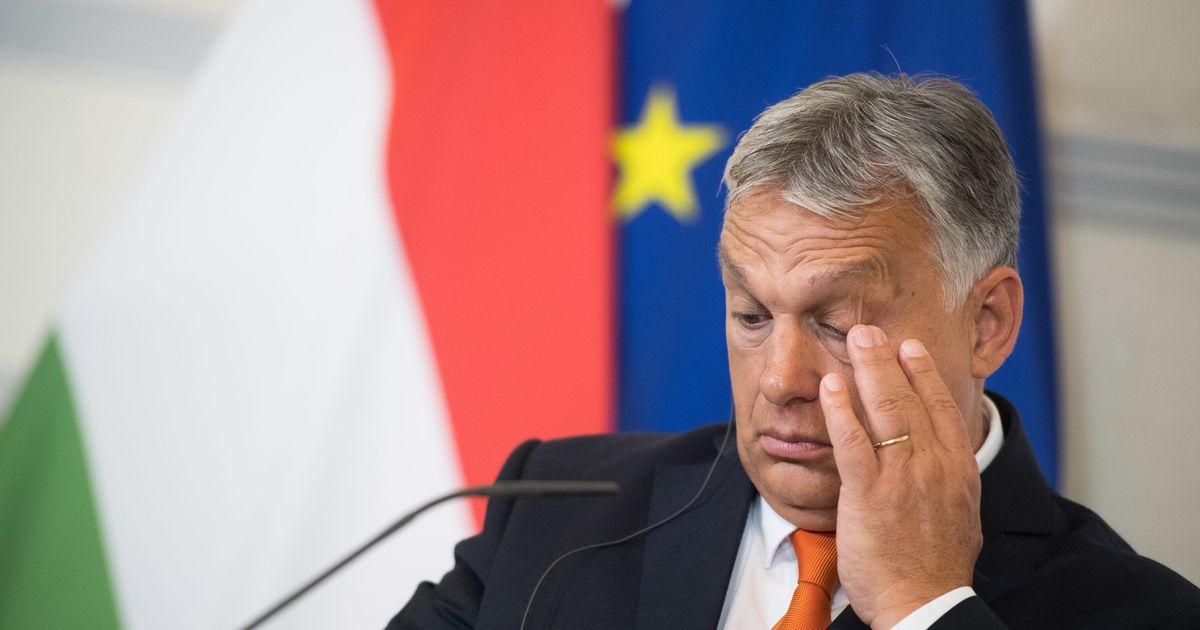 The Hungarian prime minister is sparking global outrage with his latest broadside against immigration, but remains relatively secure politically and needed internationally.

Viktor Orbán is striding back into the global culture wars — deflecting from economic woes at home and aware the EU is unlikely to challenge his rhetoric.

The longtime Hungarian leader, a onetime liberal who is now Europe’s leading far-right figure, prompted cries of outrage this week after he declared Hungary does not want to be a “mixed-race” country.

The remarks — which leaned on language once considered taboo in mainstream Hungarian society — added to the mountain of hot-button social issues Orbán has been building for years. He has demonized immigrants, faced cries of anti-Semitism and ostracized the LGBTQ+ community — often when he is trying to shore up domestic support.

Abroad, Orbán is also fostering ties to conservative and far-right figures, painting himself as a lonely figure standing athwart the West’s “woke movement.” Next week, he will even speak on the same bill as former U.S. President Donald Trump at a Texas stop of the MAGA-friendly roadshow, the Conservative Political Action Conference (CPAC).

The Hungarian leader is not opening this culture war front in a vacuum. Back home, the prime minister is grappling with a growing number of problems.

Hungary’s government is in dire need of pandemic recovery funds the EU is withholding over corruption concerns. The country’s currency has hit record lows. Households are struggling with rising prices. And a tax change has sparked protests. 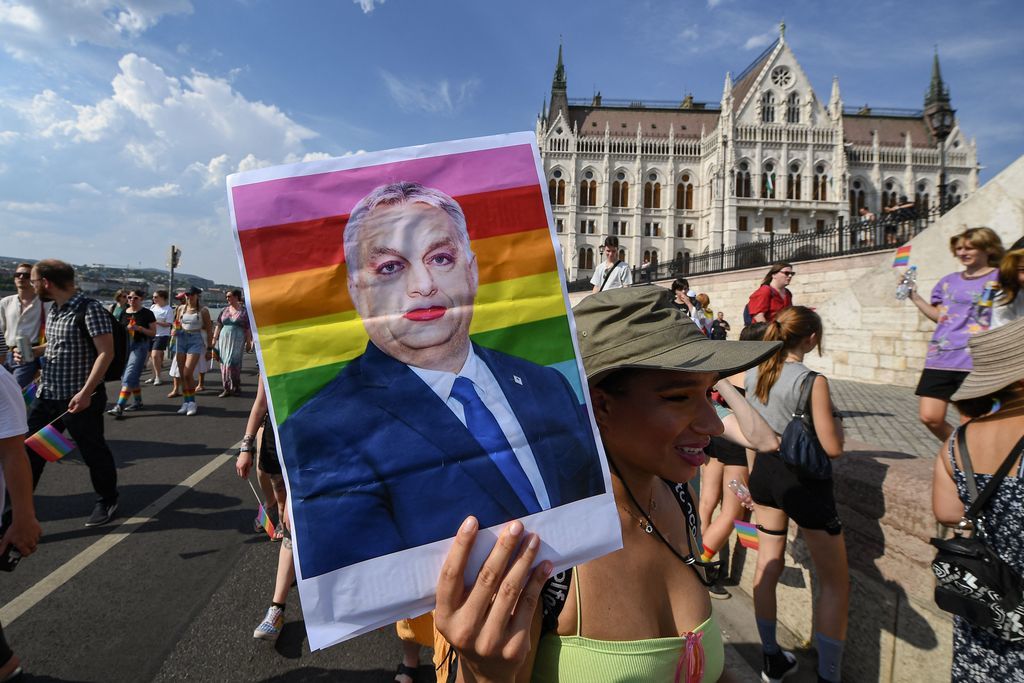 Viktor Orbán ostracized the LGBTQ+ community in the past

In his speech, Orbán made an explicit appeal: Do not let these concerns distract you from the more epochal problems.

“I ask you not to be misled, not to be deceived,” he implored the crowd in Romania, where he was speaking. “There is a war, an energy crisis, an economic crisis and wartime inflation, and all of this is drawing a screen in front of our eyes, a screen between us and the issue of gender and migration.”

He then punched the point: “It is on these issues that the future will be decided.”

For Orbán, the tactic is a calculated gamble.

Despite concerns about Hungary’s economy and democracy, Orbán remains in a relatively comfortable political position, having just won reelection and controlling much of the local media landscape. And while Brussels could withhold some funds from Hungary over legal concerns, European policymakers want to keep the Western camp together as Russia’s war rages in Ukraine.

Hungary’s economy is in bad shape — and many Hungarians are growing visibly worried as prices surge. Inflation stands at a nearly 24-year high, hitting 11.7 percent in June compared to last year. Meanwhile, the country’s currency, the forint, is the worst performer in the region.

The crumbling performance has turned attention to Orbán’s financial steerage.

“Hungarian monetary policy is not independent and not credible,” said Júlia Király, a professor who served as deputy governor of Hungary’s central bank from 2007 until 2013. The currency’s depreciation, she said, is “partly the result of the very loose monetary and fiscal policy before the crisis.”

“We have high inflation, high deficit and a deteriorating current account,” said Péter Ákos Bod, a former minister who served as governor of Hungary’s central bank in the early 1990s and is critical of the current government.

“That’s a perfect storm for any macroeconomist,” he said. “You should tell the truth to people that, ‘Sorry, that happened, and then we have to economize on things, we have to correct imbalances’ — that has not been done yet, just partly.”

Orbán is mostly pledging to shield the country’s economy. Hungary, he said last weekend, can be “a local exception in a global recession.”

Yet the country’s finances are especially vulnerable due to questions over whether the country will be able to access billions from an EU pandemic recovery fund. The money has thus far been withheld over the EU’s worries about corruption and the way Hungary issues public contracts.

Negotiations are currently ongoing between Brussels and Budapest to determine whether Hungary’s reforms are sufficient to address the EU’s qualms.

Adding to the situation is a longer-term spat between the EU and Hungary. The European Commission in April took the historic step of triggering a new mechanism that could deprive Hungary of regular EU funds over rule-of-law violations.

Amid the uncertainty, signs of social unrest have multiplied.

A slew of street protests has broken out over the government’s unexpected decision this summer to rapidly change the tax system, significantly raising income taxes for hundreds of thousands of Hungarians.

Families are also anxious about changes to the government’s flagship policy of capping utility prices. The move will mean higher costs for households with above-average gas and electricity consumption.

Economists said higher utility prices are necessary, but chided Orbán’s government for its timing and approach. Other government moves have simply left the experts puzzled.

While economists scratch their heads in Hungary, Orbán has gone global with his identity politics and clash-of-civilizations rhetoric.

His “mixed-race” speech prompted outcries of anger from civil rights groups and even one of his own longtime advisers, who quit in a dramatic fashion, brandishing Orbán’s comments as racist and anti-Semitic in a resignation letter leaked to the press.

“We are all part of the same race, the human race,” European Commission Executive Vice-President Frans Timmermans tweeted without mentioning Orbán. The U.S. embassy in Budapest issued a blanket condemnation of “all ideologies, policies, and rhetoric that give oxygen to the doctrines of hate and division.”

But while governments can scold Orbán (explicitly or not), there aren’t many concrete steps they can take.

The EU can take countries to court over specific local laws — a long and winding process. And it can, theoretically, slash regular budget payments to rule-of-law truants — as it is currently threatening to do with Hungary. But it can’t directly take similar steps over the political speech of national leaders.

During Orbán’s speech, the prime minister also claimed the war in Ukraine “would never have broken out” if Donald Trump and Angela Merkel were still in office. And he urged the EU not to take sides between Ukraine and Russia, underscoring his position on the EU’s fringes.

But his grander message was one of identity.

“This is the great historic battle that we are fighting,” he said, pointing to “demography, migration and gender.”

The Hungarian government did not respond to questions about the prime minister’s rhetoric. During a visit to Austria on Thursday, Orbán appeared to try to address the furor around his comments. “I can sometimes express myself in a way that can be misunderstood,” he said, insisting that his anti-migration stance has to do with “cultural” differences.

Both specialists and critics said the Hungarian leader is likely deflecting from economic challenges and riling up his Fidesz party base, even if his next election is four years away and his political opposition has eroded under a tightening control of the information landscape.

Orbán “wants these symbolic topics to dominate the discussion, and draw attention away from possibly more and more austerity measures that the government has to implement,” said Péter Krekó, executive director of the Budapest-based think tank Political Capital Institute.

“Austerity, of course, never really helps to keep popularity,” Krekó added. But “with symbolic fights,” he said, Orbán can “keep the core of the Fidesz electorate and try to minimize the losses — and that’s mainly the strategy now.”

“Unfortunately, in history, we have seen it several times — that when there are turbulences, there is an economic crisis, then hate policy is something which can preserve the power of the ruling party,” said Klára Dobrev, a member of the European Parliament from Hungary’s opposition Democratic Coalition party.

“It’s a one-way road,” she emphasized, “from democracy to illiberal regimes, to the dictatorship or aggression.”