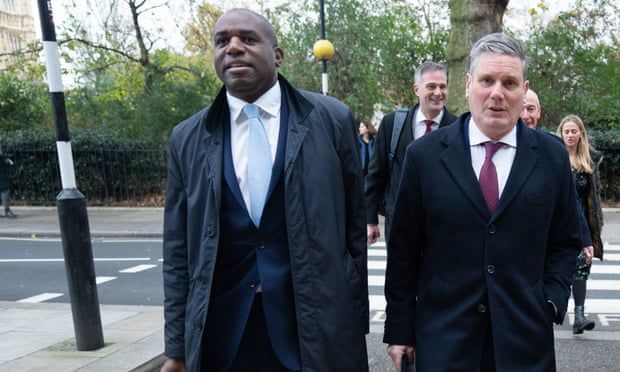 Keir Starmer and the new shadow foreign secretary David Lammy held two hours of private talks with former US president Barack Obama last week about how centre-left parties can return to power – amid new optimism over Labour’s chances at the next election.

Starmer had been due to travel to Washington to meet Obama in person but the multiple crises engulfing Boris Johnson’s government persuaded him to join the discussions by video link, while Lammy attended in person.

Lammy told the Observer that the confidential discussions with Obama and other key figures in Washington were about strategy and tactics, and formed part of an information and ideas exchange with centre-left parties that had won recent elections, including against the populist right.

While not divulging Obama’s precise advice on tactics, Lammy – who would become the UK’s first black foreign secretary if Labour came to power – suggested that issues including imbalances in party funding and the media were front and centre of the discussions.

“It really is about how progressive parties win and how Labour can fight back in an environment where our opponents have 10-to-one more funds than us,” Lammy said.

“Obviously, in the United States there is Fox News, but we have similar challenges in the UK. Getting our message across and learning collectively is really important. We are heartened by President Biden winning in the United States and Olaf Scholz in Germany. We have got to learn the lessons, and Keir is determined that we learn winning ways.

With Labour surging into a nine-point lead in Sunday’s Opinium poll for the Observer – the largest Labour advantage since 2014 recorded by Opinium – a sense of belief is beginning to build among senior Labour figures that the Tories are increasingly vulnerable.

Lammy said Obama was encouraging. “He knows that things can change very much with politics. The themes and challenges are common. Progressive parties have found themselves on the back foot in a populist age, and we have to learn from each other and from colleagues who are winning.” 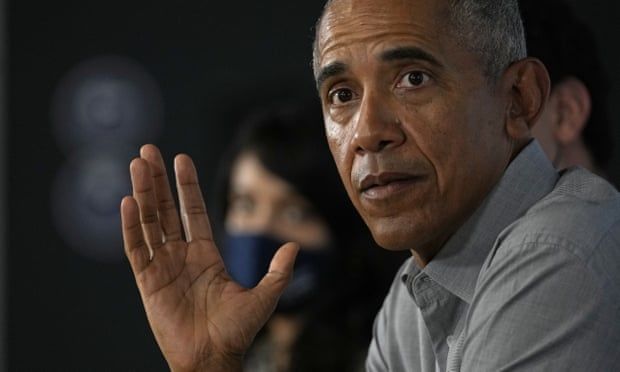 Barack Obama has been ‘encouraging’ in talks, said Lammy.

Shortly after Joe Biden led the Democrats to victory over Donald Trump in November last year, Starmer said the US election held “stark lessons” for Labour, noting that the Democrats’ “path to victory was paved by a broad coalition, including states and communities that four years ago turned away from them.”

Lammy, appointed shadow foreign secretary less than a fortnight ago in Starmer’s frontbench reshuffle, said the UK needed to return to being a respected and reliable partner on the international stage after the era of Boris Johnson.

“Britain can be a force for good, but very sadly this government’s foreign policy position is built on contradictions. We have become an unreliable, inconsistent partner. The government trumpets international law but repeatedly and openly breaks it. It seeks peace in Yemen while selling arms to Saudi Arabia. You can’t promise to protect armed forces only to cut them, and slashing aid has been largely pilloried across the world.

“We need to get back to being a consistent, reliable partner that puts values and human right at the centre of our place in the world. It is not about the rhetoric of global Britain or parading around on tanks, which I saw Liz Truss doing a few weeks ago as a sort of Pound Shop version of Margaret Thatcher.

“These are very serious times. We have got alarm bells in Ukraine, we have got a deep and painful winter for many in Afghanistan, emerging problems in the Balkans, a rising China where there are real concerns – not just about human rights but also about the way China is aggressively treating citizens in Hong Kong, and sabre-rattling in relation to Taiwan. This is a dangerous, challenging context and we need Britain once again to be a consistent, reliable partner that befits a country that is the sixth-biggest economy in the world.”

While he was clear that the UK had left the EU for good and that the matter was settled, Lammy insisted that under Labour it would build a “new relationship with the EU”, which in turn would bolster relations with Washington.

On his US visit, Lammy said people were worried about Johnson’s threat to invoke article 16 of the Northern Ireland protocol and the possible consequences. “Politicians have raised with me their real concern about the Good Friday agreement. It is noticed when Britain appears to be reneging on treaties and deals that it has struck. They have also noticed rising rhetoric between Boris Johnson and Emmanuel Macron.

“We will build a new relationship with Europe. We are out of the EU – that is clear and that is settled. As the US increasingly looks to the Pacific and eyes issues in Asia particularly, because of China, it is even more important to our trusted special relationship with the US that we are at the centre of issues in Europe.”

Lammy suggested that the UK’s best economic interests post-Brexit rested on it rebuilding close links with the EU, coupled with the pursuit of real substantial trade deals with countries outside the bloc.

“Our economy has got smaller not just because of the pandemic but as a result of leaving the EU. We want to be a country where we have growth in the economy, where British businesses can prosper, where they are not tied up with red tape. And that does, of course, mean that we have got to be engaged in striking the best trade deals across the world.”

Among his key priorities, he said, would be promoting UK development aid after Tory cuts, the battle against the climate crisis, and ensuring that Britain plays its part in supporting a fair shareout of vaccines to poorer countries in the continuing fight against Covid-19.