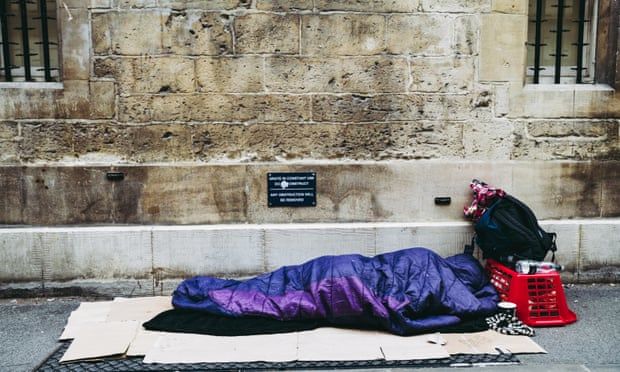 The personal data of dozens of non-British rough sleepers has been shared with the Home Office under a controversial programme that could lead to their deportation.

Councils and homelessness charities shared the sensitive details of homeless people 85 times with the Home Office under a scheme critics describe as an attempt to embroil organisations in the government’s “hostile environment” policy.

The Home Office will not reveal how many of the people referred to its Rough Sleeping Support Service (RSSS) since October 2020 have been forcibly removed from the UK.

According to documents obtained by Liberty Investigates and the Observer, the referrals were made by 11 councils including Gloucester and Leeds, a housing provider called Keystage Housing, and three charities, one of which has since withdrawn from the scheme saying it wanted to avoid putting rough sleepers at risk.

The RSSS aims to identify within 24 hours whether an undocumented rough sleeper has an immigration status that allows them to access public funds such as housing support.

Anyone found to have no lawful basis to remain in the UK could ultimately face removal, either voluntarily or forcibly.

James Tullett, chief executive of charity Ramfel, which supports destitute migrants and does not use the RSSS, said the Home Office’s failure to remove the risk of deportation to users has made it untrustworthy and a “waste of taxpayers’ money”.

The scheme was trialled by the Home Office from 2018 until the Observer revealed it as part of a covert strategy to deport rough sleepers after acquiring personal data without their consent.

After a legal challenge by the Public Interest Law Centre, it was relaunched in September 2020 with a new requirement to obtain rough sleepers’ “fully informed consent”.

However, experts questioned whether fully informed consent was possible, given the potential vulnerabilities of rough sleepers, possible language barriers and a power imbalance between them and the organisations contracted to help them.

Josephine Whitaker-Yilmaz of migrant charity Praxis, which has not used the service, said: “Our main concern is that sharing our clients’ data with the Home Office through the RSSS in its current form puts them at increased risk of detention and deportation, and this risk outweighs any benefit that the service may have.”

A freedom of information request prompted councils and charities to reveal that 49 of the rough sleepers referred had not been deported, yet what happened to the remaining 36 people remains unknown.

Keystage Housing, Luton council’s homelessness partner, made the most referrals, 28, with a spokesperson saying there was “no instances of removal or deportation from the UK”.

The number of rough sleepers using the RSSS appears to have fallen short of expectations within the Home Office, which is conducting a review into the scheme that is expected to be published this month.

In a letter dated 19 November 2021 inviting stakeholders to feed back, officials admit that “participation in the [service] has been low”.

A Home Office spokesperson said: “We remain committed to the RSSS to help get people off the streets, which has been an open and transparent service throughout.

“The public expects those with no right to be here and who make no effort to legalise their status to be removed – either voluntarily or enforced.”