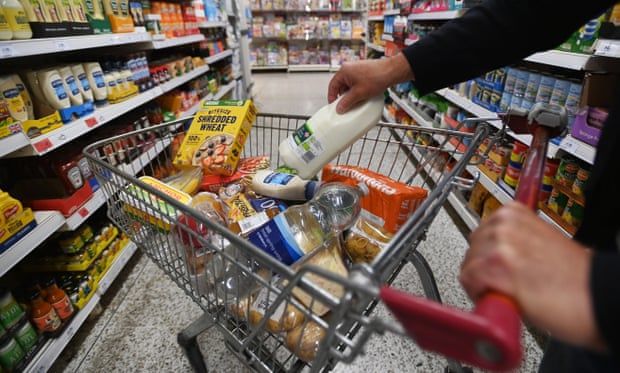 The veteran retailer Stuart Rose has urged the government to do more to shield the poorest from double-digit inflation, describing the lack of action as “horrifying”, with a prime minister “on shore leave” leaving a situation where “nobody is in charge”.

Responding to July’s 10.1% headline rate, the Conservative peer and Asda chair said: “We have been very, very slow in recognising this train coming down the tunnel and it’s run quite a lot of people over and we now have to deal with the aftermath.”

Attacking a lack of leadership while Boris Johnson is away on holiday, he said: “We’ve got to have some action. The captain of the ship is on shore leave, right, nobody’s in charge at the moment.”

Lord Rose, who is a former boss of Marks & Spencer, said action was needed to kill “pernicious” inflation, which he said “erodes wealth over time”. He dismissed claims by the Tory leadership candidate Liz Truss’s camp that it would be possible for the UK to grow its way out of the crisis.

Rose told BBC Radio 4’s Today programme: “We are sitting here now into the second, third, fourth month into this crisis and we’re still waiting to see what action will be taken … I would like to see us looking after those who need it most.”

He said inflation “picks on the poorest hardest, but we have to deal with it, we can’t ignore it”. The peer said he believed that interest rates would have to rise further to tackle rising prices, and that the UK was “heading towards a recession”.

Rose, who is backing Truss’s rival, Rishi Sunak, to become the next prime minister, criticised the candidates in the Tory leadership race for “throwing money at everything”.

As households worry about their energy bills rising even further in October, when the energy price cap is updated, more than 130,000 people have signed a petition backing a call by the former prime minister Gordon Brown for an emergency budget to tackle the energy and cost of living crisis.

Labour said soaring prices had left households concerned about how they would make ends meet. “People are worried sick, while the Tories are busy fighting and ignoring the scale of this crisis,” said the shadow chancellor, Rachel Reeves.

The chancellor, Nadhim Zahawi, hit back at the suggestion that government was waiting to offer more support to families, saying people would receive £400 of energy bill support in the “next couple of months”.

“The 8 million people who need the most urgent help are getting at least £1,200 of additional direct payments to them,” he told reporters. Zahawi also denounced Labour’s plan to freeze energy bills, stating it would reward “people like me who are at the wealthier end of the spectrum”. 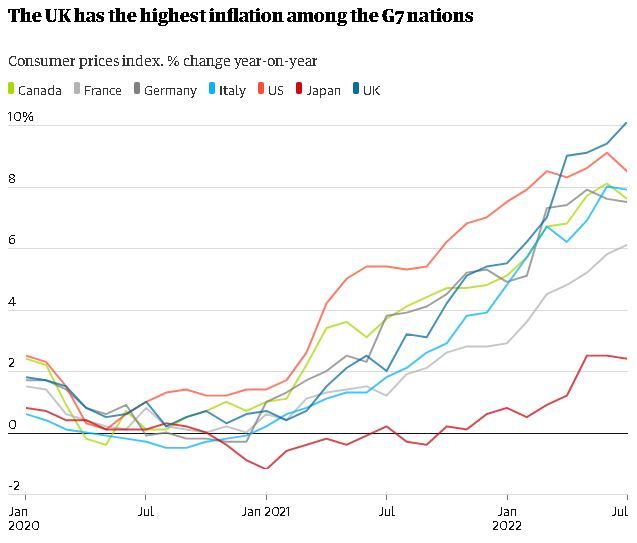 Unison called the cost of living crisis a “living nightmare for millions of working people”. The union – which represents more than 1.3 million members providing services in education, local government, the NHS, police service and energy – is calling for above-inflation pay rises to help workers cope with rocketing prices.

“The government and those angling to be the next PM appear indifferent to the plight of those struggling to make ends meet,” said Jon Richards, a Unison assistant general secretary. “Ministers are deluded if they think workers can put up with yet more misery.” 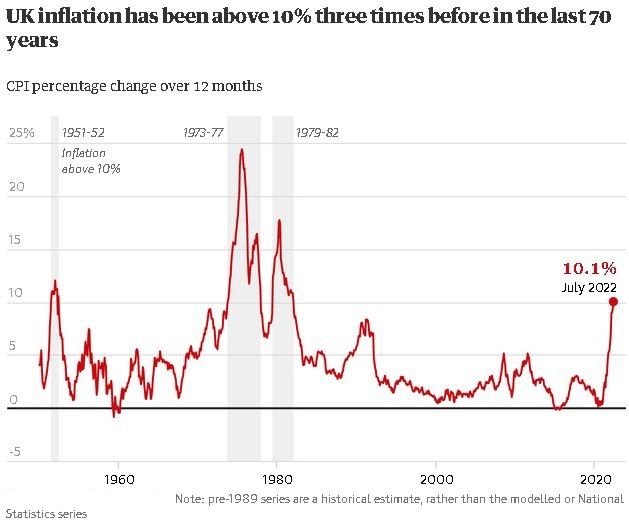 “You can see what is happening in the labour market, with employees looking to recoup some of the rise in the cost of living through wage increases. If you look at the official figures for wage increases in the private sector, they are running at about 6%. That is way ahead of what is compatible with a 2% inflation target,” he told the BBC.

Sentance, now a senior adviser at the consultancy Cambridge Econometrics, said the Bank of England needed to “put a brake” on wage increases, and predicted the Bank could raise interest rates to 4% by the end of the year.