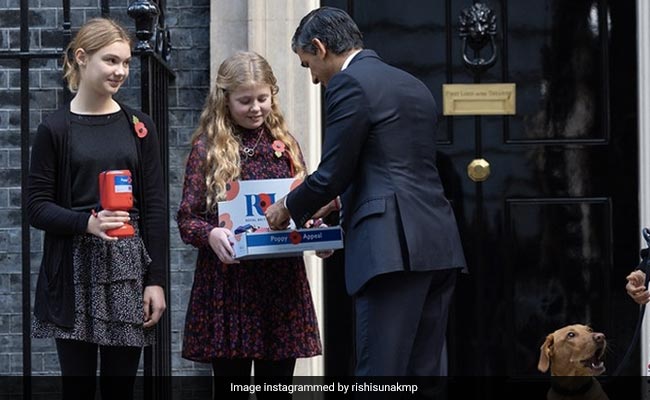 "No Greater Sacrifice...": Rishi Sunak Asks For Contributions To This Fund

The Poppy Appeal is the Royal British Legion's biggest fundraising campaign held every year in November, during the period of Remembrance

Britain's Prime Minister Rishi Sunak has asked people to contribute generously to a national fund for the UK's armed forces community and their families.

Seeking support from the public, Mr Sunak posted photos on his Instagram account showing him and the First Lady Akshata Murty donating to the fund.

"There is no greater sacrifice than that of those who lay down their lives in service of their country," Mr Sunak wrote in the Instagram post.

"So during this year's Poppy Appeal, please give generously to honour our veterans - past and present - and those who continue to protect us today," said the first Indian-origin and Hindu Prime Minister of Britain. Mr Sunak, 42, is also the youngest leader to hold the top post in the UK in over 200 years.

At his first public address after taking charge on October 24, Mr Sunak had among a range of priority areas mentioned about the need to level up the UK's military.

The Poppy Appeal is the Royal British Legion's biggest fundraising campaign held every year in November, during the period of Remembrance.

The Royal British Legion on its website says it has been supporting service men and women, ex-serving personnel and their families since 1921.

The first ever Poppy Appeal was held in 1921. The poppies sold out almost immediately and raised over 1,06,000 pounds - a considerable amount at the time. This money was used to help World War 1 (WW1) veterans with employment and housing.

According to the Royal British Legion, during WW1, much of the fighting took place in western Europe. The countryside was blasted, bombed and fought over repeatedly. Previously beautiful landscapes turned to mud; bleak and barren scenes where little or nothing could grow.

There was a notable and striking exception to the bleakness - the bright red Flanders poppies. These resilient flowers flourished in the middle of so much chaos and destruction, growing in the thousands upon thousands.

The Royal British Legion says Remembrance in the UK today is very different than it was 100 years ago. People take part whatever their political or religious beliefs. The poppy remains a humble, poignant symbol of Remembrance and hope.