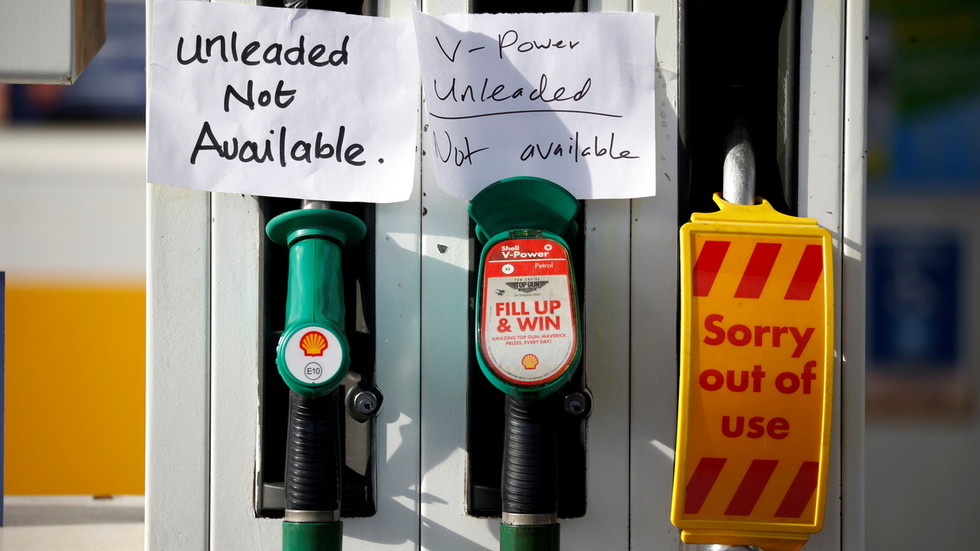 The deepening energy crisis in Britain has reached fuel supply, with large queues spotted at petrol stations across the country. One of the providers, EG Group, has imposed a £30 limit due to a surge in demand.

Long queues of cars at petrol stations were spotted across the UK on Friday, with hundreds of motorists seeking to top off their tanks amid fears of fuel shortages.

Some petrol stations ran out of fuel and closed, while many others lacked at least one brand of fuel, according to British media reports. Around 20 of 1,200 stations run by BP have been temporarily closed, while ExxonMobil’s Esso stated that “a small number” of its 200 Tesco Alliance got affected by the crisis.

EG Group, a British retailer operating nearly 400 retail sites across the UK, has imposed a flat £30 limit on purchases of any type of fuel. The company said the cap was introduced due to an “unprecedented customer demand.”

Britain’s Transport Secretary Grant Shapps has blamed the fuel issues on logistics problems. While the country’s refineries had “plenty of petrol” stockpiled, the UK has been plagued by the lack of lorry drivers, the official said, suggesting that the government might bring the army in to move fuel and other goods around.

“If it can actually help, we will bring them in,” he told BBC Breakfast.

Shapps also rejected the notion that Brexit was to blame for the current crisis, arguing that parting ways with the EU benefited the local haulage industry.

“So Brexit actually has provided part of the solution of giving more slots available for HGV tests and a lot more,” he said, adding that EU members Poland and Germany have faced a similar problem.

Other government officials and MPs rushed to reassure the public as well. Conservative MP Paul Holmes, for instance, warned against “panic buying,” insisting it was behind the shortages.

“Supply lines are good and deliveries are happening. If you panic buy you are causing a problem, and panic buying is not the solution,” tweeted Holmes, who represents Eastleigh.

Secretary of State for Digital, Culture, Media and Sport Nadine Dorries also tried to allay concerns of the motorists, denying that any fuel shortages were in place.

Dorries’ take on the fuel crisis invoked a storm of mockery, with hundreds of commenters flocking to her Twitter feed. Many argued the official’s attempt to calm the situation down might actually be more panic-inducing than reassuring.

The fuel supply issues come atop of the natural gas troubles experienced by the UK over the past few weeks. Soaring gas prices have already driven multiple smaller energy providers out of business, with more companies expected to collapse shortly.