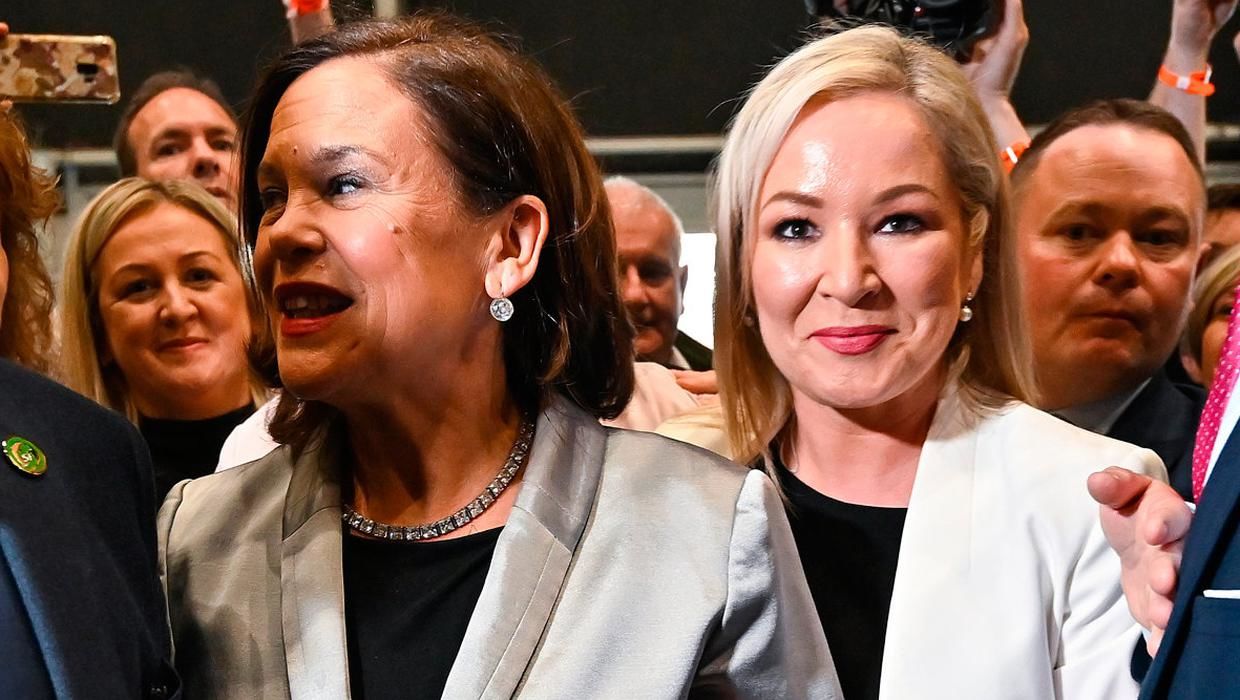 Sinn Féin has received the most first-preference votes in the 2022 Northern Ireland Assembly election by a wide margin.

The Democratic Unionist Party (DUP) first preference vote has dropped by approximately 41,000 to 184,002.

Sinn Féin has the largest number of candidates returned so far with 18 of the 46 seats declared.

Voters went to the polls on Thursday to elect 90 MLAs across 18 constituencies, each with five seats. 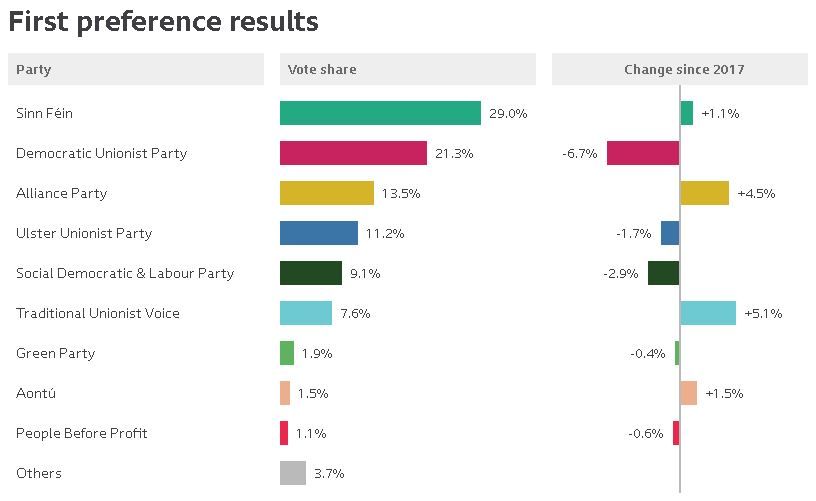 The Electoral Office has said that counting at the centres in Belfast, Jordanstown and Magherafelt will run into Saturday. 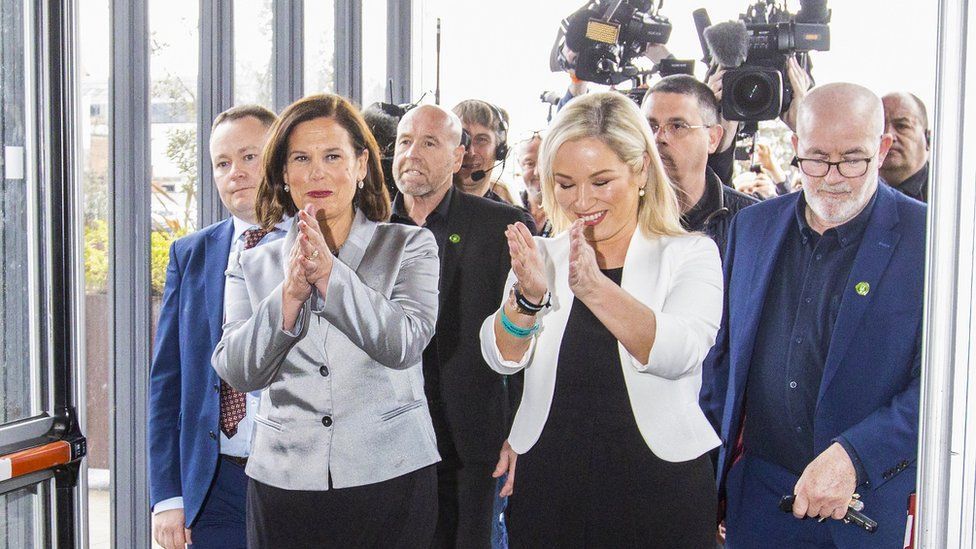 Sinn Féin's Michelle O'Neill, seen here on the right, is hoping to be the first nationalist politician to become NI's first minister

Former Education Minister Peter Weir, of the DUP, who had been a member of the first assembly in 1998 has lost his seat in Strangford.

The UUP's Roy Beggs, who had also been elected since the post-Good Friday Agreement poll was eliminated in East Antrim.

Dolores Kelly, an SDLP member of the policing board, has lost her seat in Upper Bann.

Alex Easton, who left the DUP during the last assembly term, was elected as an independent in North Down and said he had no plans to re-join the party.

Battling it out for top spot

The DUP and Sinn Féin are vying for top spot in the election, which comes with the entitlement to nominate the next first minister.

While the office of the first and deputy first minister is an equal one with joint power, the allocation of the titles is regarded as symbolically important. 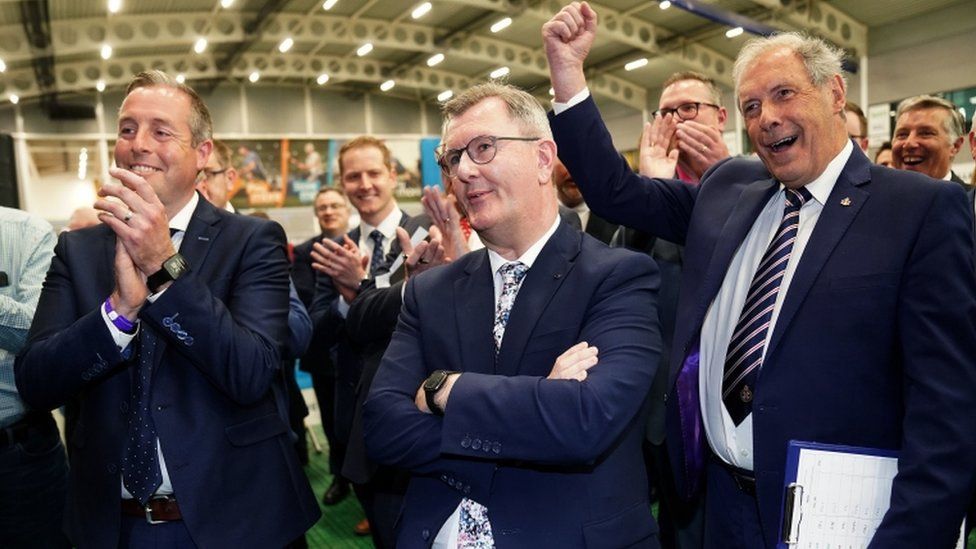 A unionist party has always been the largest in the assembly, and previously the Stormont Parliament, since the formation of Northern Ireland in 1921.

Next was the Social Democratic and Labour Party (SDLP) with 12 seats, the Ulster Unionist Party (UUP) with 10, Alliance with eight and the Green Party with two, while People Before Profit and Traditional Unionist Voice (TUV) had one MLA each.

This year, the DUP has been regarded as playing it safe, running 30 candidates, while Sinn Féin is running 34.

The die has been cast

The die has been cast now because we know the winners and losers of this particular process.

We know Sinn Féin are the big winners and will be returned as the largest party at Stormont.

The Alliance Party surge is continuing as well - the party came into the election the fifth largest party at Stormont and will be coming out the other side in third place.

The DUP's percentage vote has fallen, but the party may well escape with just losing two to three seats which was much better perhaps than many of the pollsters had predicted.

The TUV is also a winner and saw its percentage vote increase, but it's not quite clear yet whether the party will be able to tag on any extra seats.

The big loser is the SDLP - their vote has dropped and will be well below 10%.

The Ulster Unionists will probably stand still with 10 seats or so. 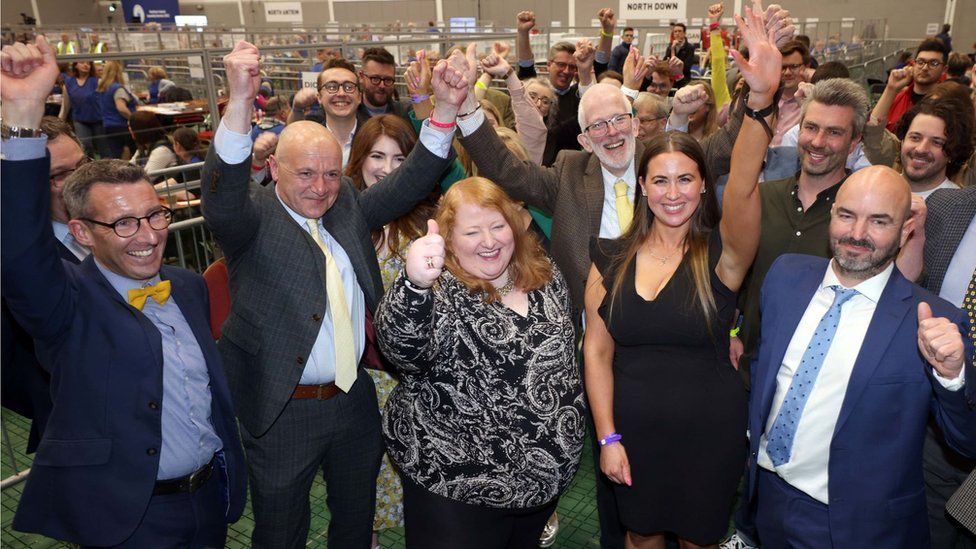 On Friday afternoon, Sinn Féin's Michelle O'Neill said it was very early to say if her party would come out on top.

"It's going to be a positive election for the party but there's a while to go," she said at the count centre in Magherafelt.

After he was returned as an MLA in Lagan Valley, the MP for the area said party officers would determine whether he would sit at Stormont or at Westminster.

He repeated his calls for the government to deal with issues created by the Northern Ireland Protocol.

On Friday evening, the DUP's Paul Givan, whose resignation as first minister in February triggered the collapse of the executive, said he hoped Sir Jeffrey would lead from Stormont.

"He is our leader and the leader of the DUP has to be at Stormont," Mr Givan, who was also elected in Lagan Valley, told BBC News NI.

Speaking after she was elected in Belfast East, Alliance Party leader Naomi Long said it appeared to be a positive day for her party.

Asked if Alliance could grow its size in the assembly, Mrs Long said: "It's all in play, it will depend on the transfers whether we will get those over the line."

UUP leader Doug Beattie said Robin Swann had been rewarded for his work as health minister with his re-election in North Antrim.

However, he said Roy Beggs would be a big loss to his assembly team. 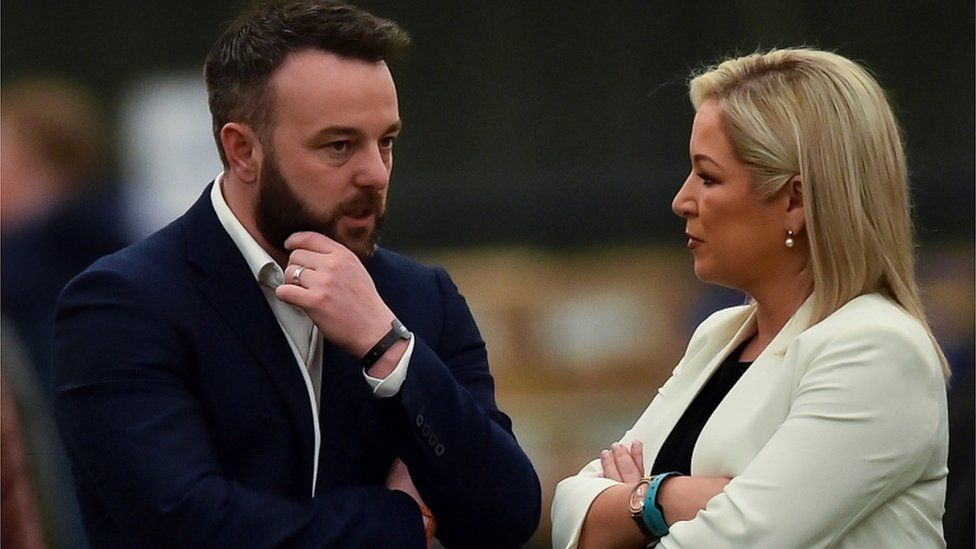 SDLP leader Colum Eastwood said in some areas his party's supporters may have "lent their votes to Sinn Féin".

"I think there's a tide there and people wanted to send a message, they wanted to kick the DUP and I think this is how they decided to do it," he told BBC News NI.

TUV leader Jim Allister, whose party saw a 45,265 first preference vote increase on its 2017 result to 65,788, said there were positives for his party to take from the election.

The result of this election will have significance for the future of the Northern Ireland Protocol.

The protocol is the Brexit deal that prevents a hard Irish border by keeping Northern Ireland inside the European Union's (EU) single market for goods.

It also creates a new trade border between Northern Ireland and the rest of the UK.

The assembly members who are elected will have to vote on whether to continue with the parts of the protocol which create the internal UK trade border.

That consent vote has to take place before the end of 2024. The vote will be decided by simple majority rather than requiring cross-community consent.

Unionist parties oppose the protocol whereas nationalists and the cross-community Alliance Party see it is an acceptable compromise to mitigate some of the impacts of Brexit.

The Northern Ireland Protocol has cast a long shadow over the election campaign following the resignation of First Minister Paul Givan in February.

The move by the DUP was in an effort to force the UK government to act over the post-Brexit trading arrangements.

Northern Ireland Secretary Brandon Lewis has indicated that the government will not be introducing legislation relating to the protocol in the Queen's Speech next week.

Elections for the assembly use the single transferable vote (STV) system of proportional representation.

This can lead to many stages of counting and can take many hours.