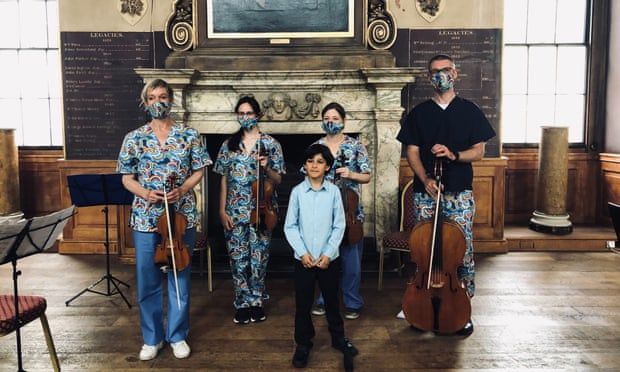 Apollo Premadasa first emailed St Bart’s hospital in the City of London last year during the height of the Covid-19 pandemic to tell them he had written the piece, Pandemia, as a “thank you” to health workers everywhere.

The piece, written for a string quartet in C minor, has three movements – “Survival”, “Hope” and “Fight” – signifying the journey the NHS, UK and the whole world have been on these past 18 months. Apollo said: “I wrote this piece to say thank you to all the doctors, nurses and scientists around in the UK and around the world for all their hard work during the pandemic. It’s been a really hard time for them and they have all been heroes.”

As Monday marked the first opportunity for a public performance of the piece and its world premiere, the six-year-old, who studies multiple instruments including cello and trombone at the Guildhall School of Music, said finally hearing it played by musicians in real-life was “amazing”.

His piece was played by four Barts Health medical staff from Newham hospital and the Royal London hospital, with the concert taking place in the Great Hall of St Bartholomew’s hospital.

Dr Andrew Kelso, the medical director of Newham hospital and cellist in the quartet said: “The world, the NHS, our patients and our staff have never before needed help in healing more than they do now. This piece is a symbolic representation of all that we have been through together and it’s a privilege to be able to perform its world premiere. Thank you to Apollo for writing it – it is a precious thing. Music heals.”

The hospital’s deputy medical director, Dr Liat Sarner, added: “The last 18 months have been incredibly hard on NHS staff. To be able to play the premiere of Apollo’s piece, his ‘thank you’ for the work we have done, in front of NHS staff, was incredibly emotional and special. I’m so proud to have been involved.”

The performance came on the 73rd anniversary of the NHS’s foundation after a year of unprecedented challenges for the health service and its workers. On Monday, the Queen awarded the prestigious George Cross to the health service, recognising the “courage, compassion and dedication” of NHS staff in all four nations of the UK, past and present.

In a handwritten message, the Queen wrote: “Over more than seven decades, and especially in recent times, you have supported the people of our country with courage, compassion and dedication, demonstrating the highest standards of public service. You have our enduring thanks and heartfelt appreciation.”

It is only the third time the award has been given to a collective body, country or organisation, rather than an individual. The George Cross is the UK’s highest award for gallantry and heroism, granted in recognition of “acts of the greatest heroism or of the most courage in circumstances of extreme danger”.

The Duke of Cambridge marked the anniversary at a service of thanksgiving at St Paul’s Cathedral and is hosting a celebration tea at Buckingham Palace to honour the NHS’s contribution to the country throughout the pandemic.
#COVID-19  #Covid
Add Comment