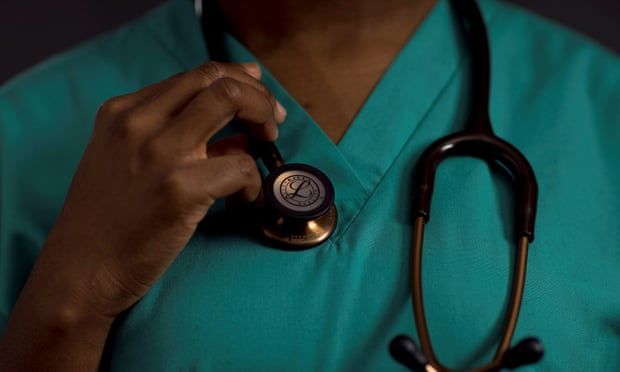 The NHS is hiring more doctors from outside the UK and the European Economic Area than from within for the first time, setting off a moral argument over the health service’s growing mentality of “poaching” from the developing world.

Unpublished figures from the General Medical Council (GMC) show that 7,377 (37%) of the 19,977 doctors who started work in the NHS in 2021 had a British qualification.

A total of 10,009 new medics learned medicine outside the UK and the EEA – so-called international medical graduates (IMGs) – compared with 9,968 within. Many were from countries such as India and Egypt that are grappling with shortages of medics. 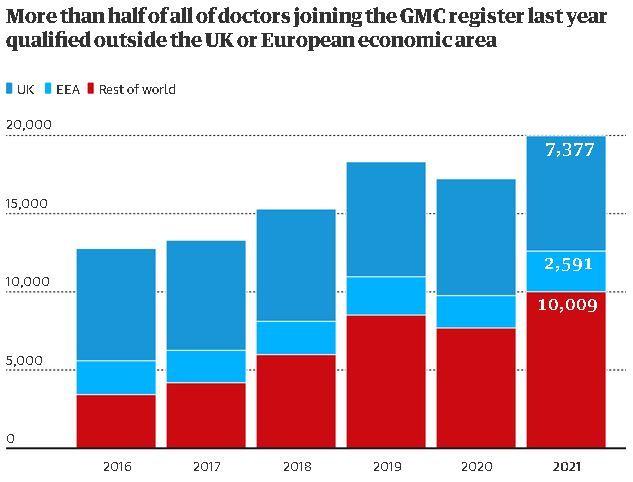 Hospitals cannot recruit more homegrown doctors because the number of medical graduates the UK is producing has risen only slightly, from 7,180 in 2016 to 7,377 last year.

Jeremy Hunt, the health secretary in 2012-18, said overseas recruitment was “morally dubious”. Others accused the UK of breaching WHO guidance on the recruitment of health professionals from countries with much less well-developed healthcare systems. The ageing population has contributed to an acute global shortage of doctors and nurses.

Hunt, the chair of the Commons health select committee, said: “The NHS would simply fall over without clinicians from abroad and we should welcome them with open arms. But depending on immigration from poorer countries to staff our NHS as a long-term strategy is morally dubious where these doctors are desperately needed in their home countries.”

J Meirion Thomas, a retired NHS cancer surgeon who obtained the figures from the GMC, said the “poaching of so many foreign doctors” was unethical. He said most IMGs came from low-income countries “where they are desperately needed to provide essential services”.

Thomas said: “The largest cohorts come from India and Pakistan, even though, according to WHO recommendations of doctor-to-patient ratios, India has a shortage of about 600,000 doctors and Pakistan 200,000 doctors. This ongoing practice … raises serious moral and ethical questions.”

Britain is also recruiting more and more nurses and midwives from outside the EEA. A total of 23,408 of such professionals began working in the UK in 2021-22, almost nine times more than the 2,719 who did so in 2017-18, according to recent Nursing and Midwifery Council (NMC) figures. Two-thirds of last year’s recruits trained in India or the Philippines.

James Buchan, an NHS workforce expert and visiting fellow at the Health Foundation thinktank, said the UK was increasingly failing to honour WHO guidance aimed at limiting rich countries’ recruitment of health personnel from poorer ones.

“The UK and all other member states have signed up to the WHO code [of practice] which asks that there be no active international recruitment of health professionals from designated ‘red list’ countries,” he said.

“The latest UK data suggests that there are questions to be asked and answered about a significant surge in the number of nurses and doctors being registered from these red list countries, such as Nigeria.” There are 3,000 nurses and midwives from Nigeria in the UK, NMC figures show.

Buchan added: “No health professional should be blocked from moving abroad to improve their job, career and life. But the aggregate effect of many individuals making that decision to move, when actively recruited, can be damaging to low-resource health systems.”

The GMC figures also show that Hunt’s promise in 2016 that “by the end of the next parliament we will make the NHS self-sufficient in doctors” has no chance of being fulfilled.

A Department of Health and Social Care spokesperson said: “We are grateful to all those who have come from abroad to work in our fantastic NHS and social care sector. Internationally trained staff have been part of the NHS since its inception in 1948 and continue to play a vital role.

“While we are absolutely delighted that these doctors have chosen to work in the NHS, we know that the world is struggling to train, employ and retain a sufficient and skilled health workforce. We have therefore committed £20m towards programmes to strengthen the health workforce in a small number of developing countries.”