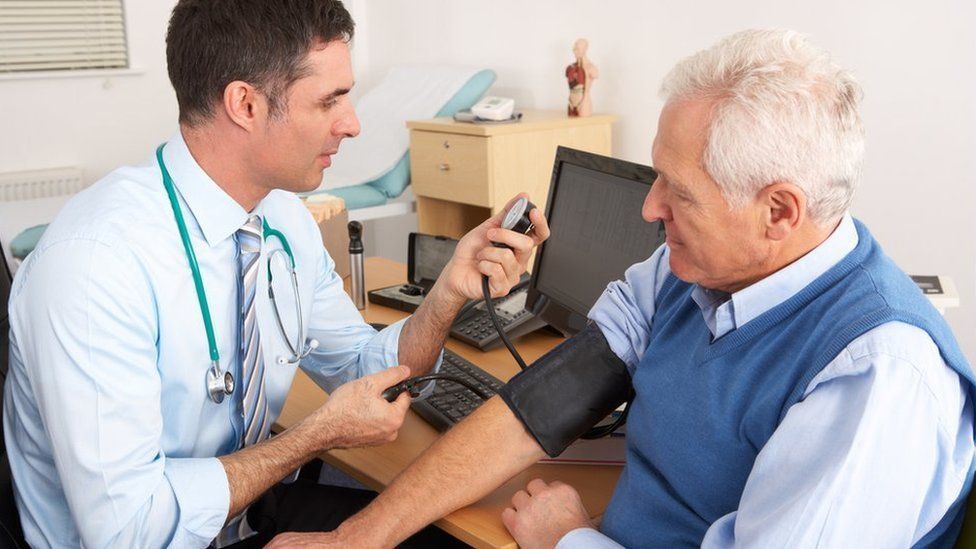 The government is planning to reverse reforms of the NHS in England introduced under David Cameron in 2012, a leaked document suggests.

The changes would aim to tackle bureaucracy and encourage health services from hospitals to GP surgeries and social care to work more closely.

The Department for Health and Social Care said it did not comment on leaks.

A spokesman added that details would be set out in due course.

The reforms by Mr Cameron's government in 2012 saw the creation of NHS England - to run the health service - and the scrapping of primary care trusts in favour of GP-led clinical commissioning groups to organise local services.

Under the latest proposals, set out in a leaked document published by health news website Health Policy Insight, there will be "enhanced powers of direction for the government" to "ensure that decision makers overseeing the health system at a national level are effectively held to account".

Instead of a system that requires competitive tendering for contracts - sometimes involving private companies, the NHS and local authorities will be left to run services and told to collaborate with each other, says the draft White Paper, designed to set out proposed legislation.

There will also be more focus on GPs, hospitals and social care services working together to improve patient care.

The paper stresses that the Covid pandemic "demonstrated plainly that this broader approach to health and care is not only desirable, but essential".

But he raised concerns around the timing of such a move.

"While many might agree with the ultimate objective of more integrated health and care services, there are clear risks in distracting the service when the NHS is still battling Covid-19 and in the midst of the biggest vaccination programme in our history," Mr Murray added.

The trade unions for doctors and nurses, the British Medical Association and the Royal College of Nursing respectively, would not comment on the leaked proposals.

A Conservative government headed by Boris Johnson is about to start reversing health reforms in England introduced under David Cameron.

That in itself is a significant moment, though it has been in the offing for a while.

The Health and Social Care Act of 2012 was highly controversial.

The left hated it because of the introduction of competitive tendering which was seen as a vehicle for private companies to undermine the NHS.

Many Conservative politicians came to dislike it because of bureaucratic costs and confused lines of accountability.

Sir Simon Stevens, head of NHS England, called for a redrafting of legislation to simplify the system.

Now Matt Hancock, the health secretary, is grasping the nettle and will soon publish a government White Paper with plans to give ministers more control over the complex web of health entities in England.

NHS organisations and local authorities will be told to focus on working together for the benefit of their local populations.

But the detail, as always, will be closely scrutinised.

Some will question why the government has chosen to launch the plans with the pandemic still raging.

Others may ask whether this is a power grab by ministers which won't necessarily improve patient care.

He told the BBC he hoped "the changes in the wiring behind the dashboard shouldn't be too noticeable to patients and when it is, it will be in the longer term because the results they're getting are better".

But he warned against over-optimism, saying structural change could help but was not "the magic ingredient" to better delivery of care.

Meanwhile, Dr John Lister, of campaign group Keep Our NHS Public, said: "The leaked draft of the White Paper has been interpreted as planning to 'scrap forced privatisation and competition within the NHS', but the draft makes clear that 'there will continue to be an important role for voluntary and independent sector providers'."

He told BBC Breakfast: "Last year was the first year in history where, across the world, there were more over-65s than under-fives, so we are all having to deal with this big change in our health provision of the growth in older people and what that means is you need a lot more joined up care."

He added: "The structures need to be improved to make that possible and I think that's what these reforms are intended to do, so I think they could be very positive."

However, speaking to BBC Radio 4's Today programme, Mr Hunt warned against the emergence of "cosy local monopolies" and said the reforms needed to include "a proper accountability mechanism" - similar to Ofsted inspecting schools, he added.

"How we make sure that the NHS continues to be held accountable for these huge sums of public money is something that, I am sure, people will want to ask."

The 2012 Health and Social Care Act, brought in by the coalition government led by then-Conservative Prime Minister Mr Cameron, alongside his Health Secretary Andrew Lansley, put NHS England at arms length from the secretary of state.

It gave more control over budgets to GPs and other clinicians, while greater competition with the private sector was encouraged.

However, the changes attracted criticism from professional bodies representing doctors, nurses and other NHS workers as well as opposition MPs.

An NHS spokesman said the service had come together "to draw up practical proposals that will make it easier for those delivering health and care to work together to deliver the best possible care for patients, without some of the bureaucracy and fragmentation implicit in the 2012 act".

"These proposals were set out publicly in the NHS Long Term Plan in 2019 and further developed last year, drawing on what the best local health systems are already doing," they added.