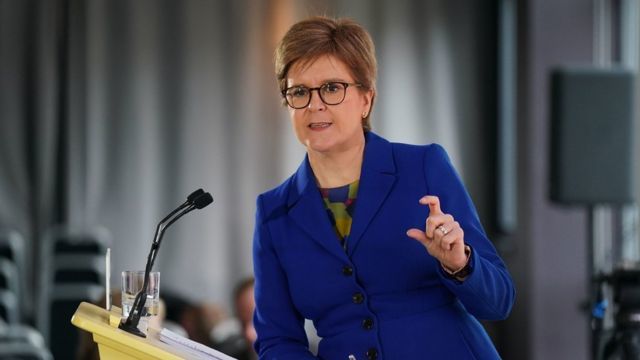 Next election will be independence vote - Nicola Sturgeon

Nicola Sturgeon has said the SNP will use the next general election as an attempt to show a majority of people in Scotland support independence.

The first minister was responding to the Supreme Court's unanimous ruling she does not have the power to hold a referendum next year.

Ms Sturgeon said she respected the ruling, which she admitted was a "tough pill to swallow".

But she said the independence movement had to now find a new way forward.

He told MPs: "The people of Scotland want us to be working on fixing the major challenges that we collectively face, whether that's the economy, supporting the NHS or indeed supporting Ukraine.

"Now is the time for politicians to work together and that's what this government will do." 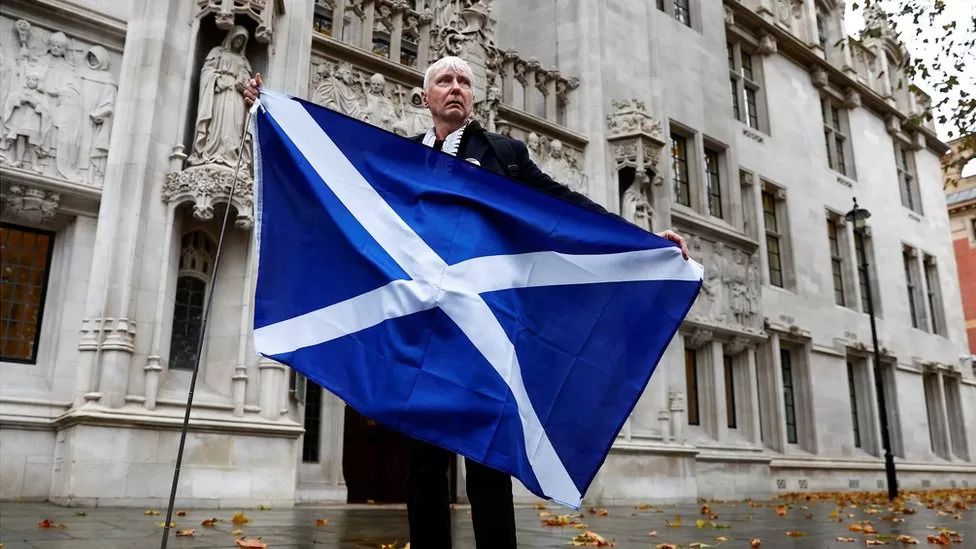 A small group of independence supporters gathered outside the Supreme Court ahead of the ruling being announced
Ms Sturgeon had wanted to hold a referendum on 19 October next year but the UK government has refused to grant the formal consent that was in place ahead of the last referendum in 2014, when voters backed staying in the UK by 55% to 45%.

The Supreme Court ruled that the Scottish Parliament does not have the power to legislate on the constitution, including the union between Scotland and England, without that consent being in place.

Speaking to the media at a hotel in Edinburgh after the ruling was announced, Ms Sturgeon acknowledged that there would be a "real sense of frustration today in both the SNP and in the wider movement".

But she said that she believed this would be "short-lived", predicted that rallies planned for several towns and cities across Scotland on Wednesday evening would show the "strength" of the independence campaign.

Ms Sturgeon said her preferred route to independence was still through a referendum, but admitted that there was currently little prospect of Mr Sunak changing his opposition to a vote being held.

She said this showed that the UK was not a voluntary union, and accused the UK government of "outright democracy-denial", a position she predicted was "unsustainable".

The first minister added: "We must and we will find another democratic, lawful means for Scottish people to express their will", with the next general election being the most obvious vehicle for that.

She said the SNP would now begin the process of deciding precisely how a "de facto" referendum would work, with a special party conference to be hold in the new year.

The party will also launch a "major campaign in defence of Scottish democracy", she said.

The Conservatives and Labour have already rejected the idea of the election acting as a referendum, arguing that general elections are fought on a range of issues and not just the constitution.

Recent opinion polls have suggested that the country is essentially split down the middle on the independence question, but with a very narrow majority in favour of staying in the UK.