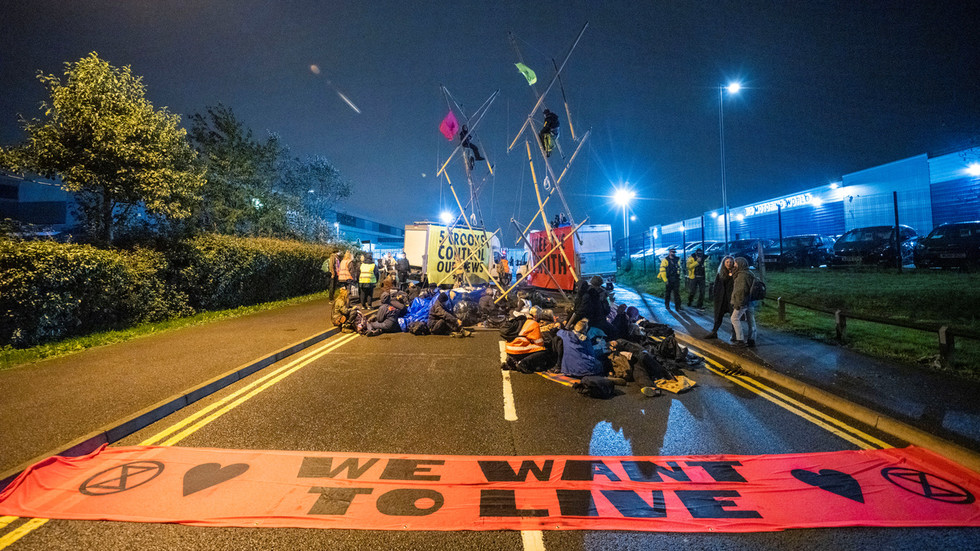 The Times apologized to its readers, who couldn’t get their newspapers on time on Saturday, while The Sun labeled the blocking of printing presses by Extinction Rebellion climate protestors “an attack on all the free press.”

More than a hundred climate activists used vehicles and bamboo structures to block roads leading to Newsprinters’ print works in Broxbourne in Hertfordshire, Knowsley in Merseyside and near Motherwell in Scotland’s North Lanarkshire on Friday.

The presses in question print newspapers owned by Australian-born American media tycoon Rupert Murdoch, including The Sun and The Times, as well as some other national papers such as the Daily Mail, Daily Telegraph and Financial Times.

Police officers arrested 72 people as they worked to restore access to the sites. The action, which was branded a “success” by the activists, saw many papers delayed in getting to their readers the following morning.
Extinction Rebellion said they targeted Murdoch’s newspapers because they were “polluting the national debate on climate change” and obfuscating other important issues, such as the refugee crisis.

The group is against a foreign billionaire being the biggest owner of the UK media, its spokesman, Rupert Read said on Twitter, arguing that a free press is impossible when it’s controlled by “a handful of hard-Right oligarchs.”

Check this out.
No Times today, and no Sun: no Murdoch trash.
No Telegraph either; we blockaded them too, for their continuing lies & distortions on climate (and Covid).
We are #extinctionrebellion. For one day, let’s #freethetruth.
And get the oligarchs to get it: #tellthetruth! pic.twitter.com/AQmOWkviDu

The Times apologized to its readers for the inconvenience on Twitter, saying it was trying to get its papers to retailers as soon as possible.

“This is an attack on all the free press,” the Sun tabloid said of the actions of Extinction Rebellion in its statement. That opinion was shared by British Home Secretary Priti Patel.

But many commentators online argued that the Sun has nothing do with a free press and blasted Murdoch as “a climate-change-denying billionaire.” They celebrated the fact that copies of his paper weren’t appearing on newsagents’ shelves, with the #dontbuythesun hashtag trending on Twitter in the UK.

The blocking of the printing presses occurred as part of a 10-day “disruption” organized by Extinction Rebellion with the aim of pressuring British MPs to support an emergency climate bill that would force the government to account for the country’s “entire carbon footprint while actively conserving nature here and overseas.”

The action has already seen well-attended marches in London and Manchester, as well as activists gluing themselves to the pavement outside Parliament.

Disruptive demonstrations and news-making stunts are a trademark of Extinction Rebellion protesters, who have been blocking traffic and hampering the work of government institutions in the UK, the US, Australia and elsewhere in recent years.