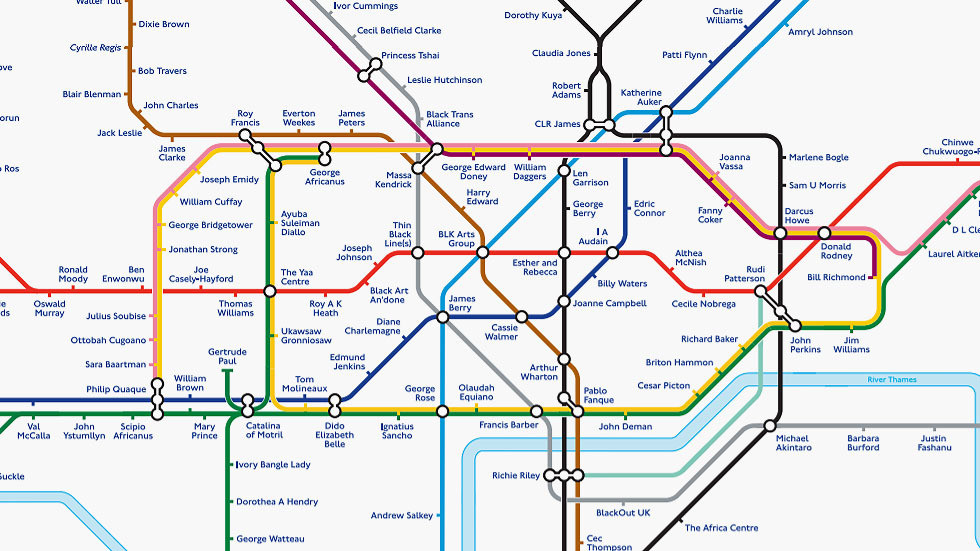 Transport for London (TfL), the government body responsible for the capital’s transport, has unveiled a special tube map to celebrate the contribution of prominent black people to the city in the past 2,000 years.
On Tuesday, TfL posted its own contribution to Black History Month. The map sees the names of London’s tube stops replaced by those of 272 notable black people and organisations linked to the capital’s black community.

The map, which has been released to celebrate the 40th anniversary of the Black Cultural Archives, also changes the names of the metro lines to link the individuals and organisations by common themes, such as culture and art.

“Black History is London’s history,” Mayor of London Sadiq Khan told the BBC, adding that “this reimagination of the iconic tube map celebrates the enormous contribution black people have made, and continue to make, to the success of our city.”

The mayor said he was “determined to create a more equal city where black lives truly matter,” and claimed that this map was an important part of educating people.
The map features civil society groups such as the ‘Black Trans Alliance’ and ‘UK Black Pride’, whose contribution to the capital has been deemed notable.

Individuals featured on the 272-station map include Claudia Jones, a political activist who co-founded the Notting Hill Carnival, as well as Pablo Fanque, a successful Victorian circus owner – his name appears in the Beatles song ‘Being for the Benefit of Mr. Kite!’.

Meanwhile, Sloane Square station is replaced by Ignatius Sancho, a British abolitionist, writer and composer who is also famed for being the first black man to vote in a British election. Swing band leader, Ken ‘Snakehips’ Johnson, also features in the list of the most influential black individuals in the capital since the Roman invasion in 43AD.

Appearing on the sports-focused Bakerloo Line is Cyrille Regis, a French Guiana-born footballer who played five games for England. He was known as one of the best forwards of his generation, scoring 112 goals in 297 appearances for West Brom and 62 goals in 274 appearances for Coventry.

The earliest figure to appear on the list is Ivory Bangle Lady. Her skeleton was found in 1901 in York. Archaeological data suggested she was a high-status woman who lived in fourth-century Roman York, and was possibly from a North African background.
#Johnson
Add Comment