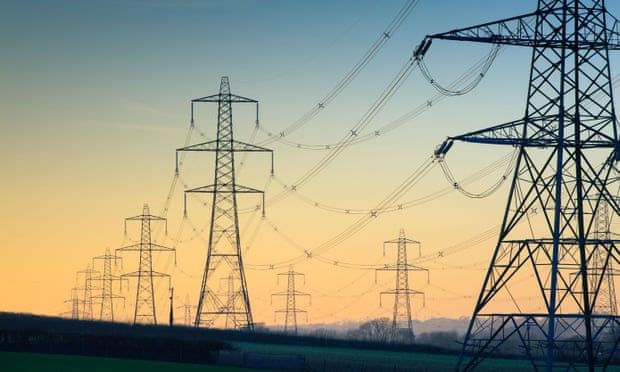 New controller will be part of overhaul to make the energy system ‘fit for the future’
The government plans to strip National Grid of its role keeping Great Britain’s lights on as part of a proposed “revolution’” in the electricity network driven by smart digital technologies.

The FTSE 100 company has played a role in managing the energy system of England, Scotland and Wales for more than 30 years (Northern Ireland has its own network). It is the electricity system operator, balancing supply and demand to ensure the electricity supply. But it will lose its place at the heart of the industry after government officials put forward plans to replace it with an independent “future system operator”.

The new system controller would help steer the country towards its climate targets, at the lowest cost to energy bill payers, by providing impartial data and advice after an overhaul of the rules governing the energy system to make it “fit for the future”.

The plans are part of a string of new proposals to help connect millions of electric cars, smart appliances and other green technologies to the energy system, which government officials believe could help to save £10bn a year by 2050, and create up to up to 10,000 jobs for electricians, data scientists and engineers.

The new regulations aim to make it easier for electric cars to export electricity from their batteries back on to the power grid or to homes when needed. They could also help large-scale and long-duration batteries play a role in storing renewable energy, so that it is available when solar and wind power generation levels are low.

Anne-Marie Trevelyan, the energy and climate change minister, said the rules would allow households to “take control of their energy use and save money” while helping to make sure there is clean electricity available “when and where it’s needed”.

She added: “We need to ensure our energy system can cope with the demands of the future. Smart technologies will help us to tackle climate change while making sure that the lights stay on and bills stay low.”

The energy regulator, Ofgem, raised concerns earlier this year that National Grid would face a “conflict of interest” in providing advice on the future electricity system because it also owns energy networks that stand to benefit financially from future investment plans. It called for a new independent operator to take its place.

Jonathan Brearley, Ofgem’s chief executive, said the UK requires a “revolution” in how and when it uses electricity to help meet its climate targets and added that the government’s plans for a new digital energy system were “essential” to meeting this goal “while keeping energy bills affordable for everyone”.

A National Grid spokesman said the company would “work closely” with the government and Ofgem on the role of a future system operator, as well as “the most appropriate ownership model and any future related sale”.

The division has earned National Grid an average of £199m a year over the last five years, or 1.3% of the group’s total revenues, which are split between the UK – where it operates high-voltage transmission lines in England and Wales, and the country’s gas system – and its growing energy supply business in the US.
Add Comment