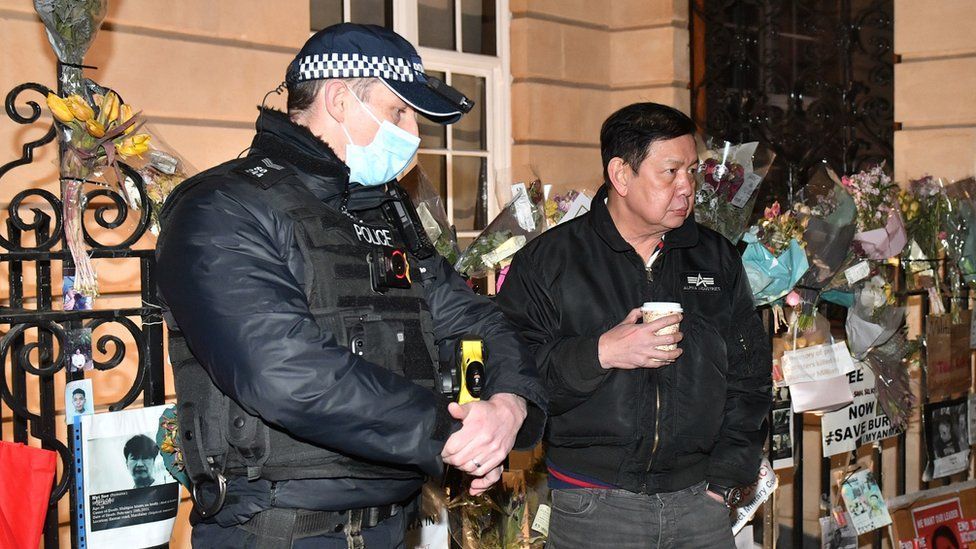 Myanmar ambassador to UK 'locked out' of London embassy

Myanmar's ambassador in London says he has been locked out of his embassy.

Kyaw Zwar Minn said staff were asked to leave the building by Myanmar's military attaché and he was told he was no longer the country's representative.

"I have been locked out," he told Reuters news agency.

More than 500 people - including dozens of children - have been killed so far as pro-democracy protesters demand a return to power of elected leader Ms Suu Kyi and her National League for Democracy (NLD) party.

Kyaw Zwar Minn described Wednesday's events as "a kind of coup, in the middle of London", Reuters reported. "This kind of coup is not going to happen," he added.

The ambassador was pictured standing on the street outside Myanmar's embassy in London's Mayfair speaking to officers from the Metropolitan Police force.

Police were reportedly called to stop staff re-entering the building.

Protesters have since been gathering outside the embassy.

In March, Kyaw Zwar Minn called for the release of Ms Suu Kyi and told the BBC that Myanmar was "divided" and could be at risk of civil war.

He maintained that his remarks were not "betraying the country", adding that he was standing on "middle" ground.

The ambassador, who is a former military colonel, was praised by British Foreign Secretary Dominic Raab, who commended his "courage and patriotism".

Deputy ambassador Chit Win is said to have taken over as charge d'affairs in London, Reuters reported, citing diplomats with knowledge of the matter.

A spokesman for the UK Foreign Office told the BBC that it was "seeking clarification on the current status of the Myanmar ambassador in London, in line with diplomatic protocol".

Myanmar's military seized power in the country after overthrowing the government and declared a state of emergency.

Last week, Ms Suu Kyi was charged with breaking a colonial-era official secrets law, which carries a term of up to 14 years in prison.

* Myanmar, also known as Burma, became independent from Britain in 1948. For much of its modern history it has been under military rule


* Restrictions began loosening from 2010 onwards, leading to free elections in 2015 and the installation of a government led by veteran opposition leader Aung San Suu Kyi the following year


* In 2017, Myanmar's army responded to attacks on police by Rohingya militants with a deadly crackdown, driving more than half a million Rohingya Muslims across the border into Bangladesh in what the UN later called a "textbook example of ethnic cleansing"