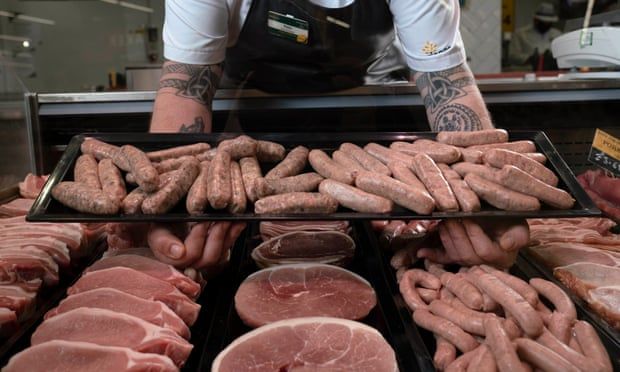 Morrisons writes to reassure anxious UK farmers over US takeover

CEO’s letter to 3,000 suppliers reaffirms grocer’s unique dealings with British agriculture
Morrisons has written to the UK farmers whose produce fills its supermarket shelves to reassure them that the takeover offer led by US investment firm Fortress will protect the character of the business and its relationship with its suppliers.

In a letter to the 3,000 farmers who supply the grocer, seen by the Guardian, Morrison’s chief executive, David Potts, writes that the company’s board believes the Fortress would be a “suitable and responsible owner”, and that its pledges about the future of the company “carry genuine weight”.

“Throughout our discussions with Fortress, we considered very carefully whether Fortress would be a suitable and appropriate owner of Morrisons and whether their plans for the business would protect and develop the fundamental character of Morrisons for the benefit of all stakeholders,” Potts wrote.

“And that of course includes the farmers we work with and British agriculture more widely.”

Unlike other supermarkets, Morrisons deals directly with the farmers who stock its shelves, rather than wholesalers. As a result, the National Farmers’ Union (NFU) calls Morrisons “British farming’s biggest direct customer”.

Farmers had previously expressed concerns over whether a future owner of Morrisons would honour its relationships with food producers and its payment practices, while also giving a commitment to work with farmers on improving sustainability and ensuring food security in the UK.

Morrisons has been viewed as a cornerstone of the UK’s food supply infrastructure during the disruptions felt during the pandemic and following Brexit.

Potts wrote that the grocer was “proud to have championed British farmers” for generations, and assured them that this “will not change under new ownership”. The letter was first reported by the Sunday Telegraph.

Minette Batters, the NFU president, said last week that farmers would be “keeping a close watch over any potential takeover of Morrisons”.

Batters welcomed Fortress’s recognition of the significant role played by Morrisons with British farming, describing it as “encouraging” that the firm had “committed to continue with Morrisons’ strategic intentions to support British farmers and work with them to deliver on the business’s environmental commitments”.

“Sourcing from British farms has long been part of Morrisons’ heritage and it is reassuring that the potential buyer wishes to continue to uphold these core values going forwards,” Batters said.

Fortress’s bid values Morrison’s shares at £6.3bn, before the inclusion of £3.2bn of net debt, giving a total value of £9.5bn.

Morrison’s board accepted the offer earlier this month, having rejected an earlier proposal from US private equity firm Clayton, Dubilier & Rice (CD&R). It is not clear if CD&R will return with a higher bid, or if other private equity firms such as Apollo will also bid for the UK’s fourth-largest supermarket chain.
Add Comment