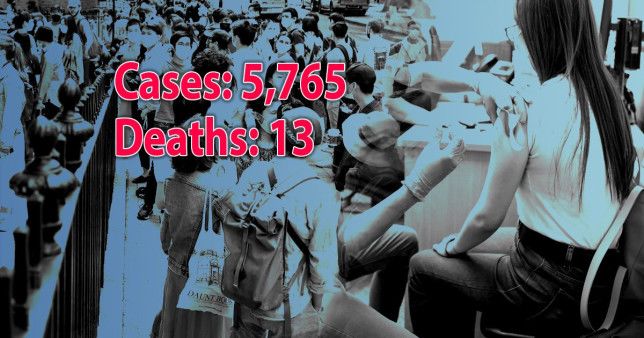 Another 5,765 people have been diagnosed with Covid in the UK, placing further doubt on whether the planned end of lockdown will go ahead.

But the country has passed yet another milestone in its vaccine roll-out with 40million people now having had at least one jab.

Official figures show there has also been a further 13 deaths, while 154 more people have been admitted to hospital.

It’s after the number of cases rose to their highest level in three months yesterday.

The 6,238 lab-confirmed cases was the highest single-day figure since March 25. The seven day case rate is up nearly 50% compared to last week.

Figures show that, in total ,Covid cases in the UK have risen by 75% since late March, forcing ministers to reconsider whether all restrictions should be scrapped on June 21.

Plans to delay the end of lockdown by two weeks are reportedly being drawn up while further measures including mask-wearing and working from home guidance may remain in place well into the summer.

But, while case rates have been going up, the number of hospitalisations and deaths have remained low, indicating that the vaccine-drive is preventing serious disease. 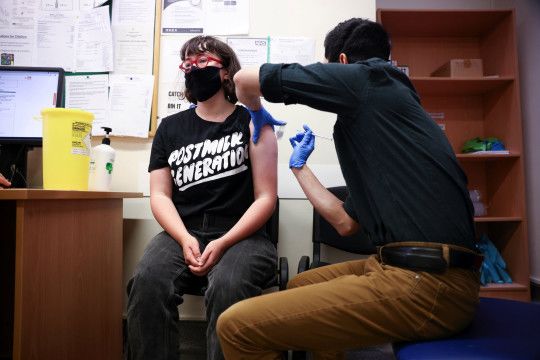 Chris Hopson, the chief executive of NHS Providers, said the number of people in hospital with the Covid-19 variant first detected in India, also known as the Delta variant, was not increasing ‘very significantly’.

He told BBC Breakfast that many of those in hospital in Bolton – which has the highest number of cases of the Indian variant in England – were younger than in previous waves of the pandemic and therefore less strain is being placed on critical NHS services.

Meanwhile, The Telegraph reported that over 25s are set to be offered a vaccine ‘this week’ and the second doses for over 40s will be sped up to try to beat the spread of the new form of the virus.

Young people today showed how keen they are to get vaccinated by queueing around the block at a site in Harrow that had begun offering jabs to everyone over 18.