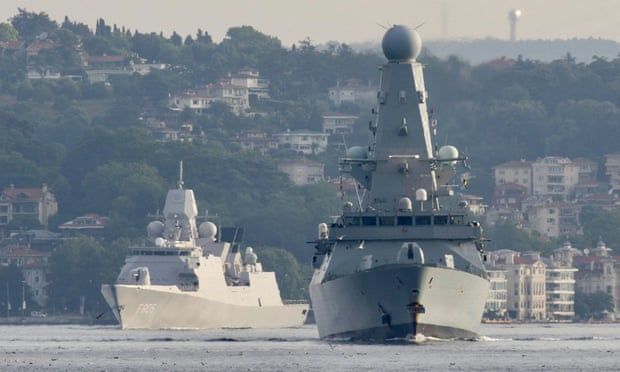 Individual error blamed for security lapse after leak of information about Royal Navy destroyer off Crimea
A Ministry of Defence investigation into how secret military papers about a disputed voyage off Crimea ended up at a Kent bus stop has blamed individual error and found no evidence of foul play.

The rain-sodden papers, which were handed to the BBC last month by an anonymous member of the public, predicted the likely reaction of Russia to the passage of the Royal Navy destroyer HMS Defender off Crimea days after a dispute with Moscow over the ship’s movements and whether warning shots had been fired.

The papers also laid out plans for a possible UK military presence in Afghanistan.

In a written statement to MPs on Monday, the defence secretary, Ben Wallace, said an internal investigation into the security lapse provided no indication the documents had fallen into the wrong hands.

He said: “The investigation has found no evidence of espionage and has concluded there has been no compromise of the papers by our adversaries.”

Wallace added: “We are confident that we have recovered all the secret papers.”

Some of the 50 recovered pages found at the bus stop were categorised as “official sensitive”. Other pages, about Afghanistan, were marked “Secret UK Eyes Only” and were addressed to Wallace’s private secretary.

The documents said the voyage of HMS Defender, which had two embedded journalists onboard, was conducted in the expectation that the Kremlin might respond aggressively.

Three potential Russian responses were outlined to the voyage, from “safe and professional” to “neither safe nor professional”.

On 23 June, Russia said it had fired warning shots at HMS Defender after it sailed briefly through territorial waters off the coast of the disputed territory of Crimea. It claimed a jet had dropped four bombs in the path of the British destroyer to force it to change course. It later emerged that cannon had been fired but only at a safe distance behind the British warship.

MPs have previously been told the leak appeared to be the result of a mistake by one individual, who reported the loss to the Ministry of Defence.

Wallace said: “The investigation has independently confirmed the circumstances of the loss, including the management of the papers within the department, the location at which the papers were lost and the manner in which that occurred.

“These are consistent with the events self-reported by the individual.”

The individual concerned has been removed from “sensitive work” and has had their security clearance suspended pending a full review. “For security reasons, the department will be making no further comment on the nature of the loss or on the identity of the individual,” Wallace said.

He added: “The department takes protection of its information extremely seriously and will continue to take firm action in response to such incidents.”
Add Comment