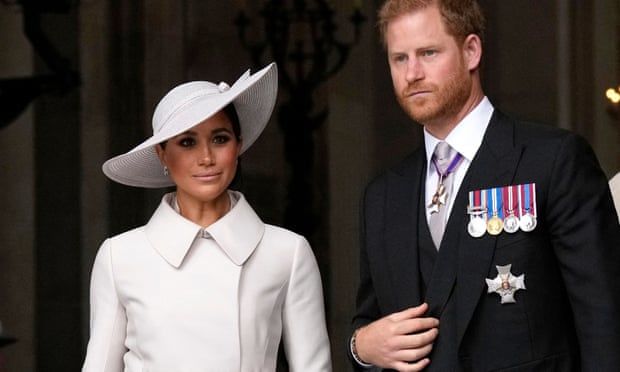 Duchess of Sussex reveals in magazine interview how toxic tabloid culture had torn her and Harry’s families apart
The Duchess of Sussex has said her and Prince Harry’s privacy battle with the Mail on Sunday cost her husband his relationship with his father.

In an interview with the Cut magazine, Meghan discussed how toxic tabloid culture had torn her and the Duke of Sussex’s families apart.

The Mail on Sunday published details of a letter the star of Suits wrote to her father begging him to stop speaking to reporters, and Meghan successfully sued the newspaper for invasion of privacy.

“Harry said to me: ‘I lost my dad in this process,’” Meghan told the New York magazine, adding that she did not believe events had to unfold in the same way for Harry as they did for her and her estranged father, Thomas Markle.

Meghan said she believed if her son, Archie, was in school in the UK, she would not be able to drop him off or pick him up without a press pen of 40 photographers and journalists watching her.

“Sorry, I have a problem with that,” the duchess said. “That doesn’t make me obsessed with privacy. That makes me a strong and good parent protecting my child.”

Meghan also said she believed there was “room for forgiveness” between herself and the royal family. “I think forgiveness is really important,” she told the magazine.

“It takes a lot more energy to not forgive, but it takes a lot of effort to forgive. I’ve really made an active effort, especially knowing that I can say anything.”

She revealed she will be “getting back on Instagram” after deleting her account more than four years ago as part of becoming a senior royal, adding that along with deleting her personal social accounts, she felt like “an actress” playing at being a member of the royal family.

Earlier this week, in her Archetypes podcast, Meghan revealed that during the Sussexes’ tour of South Africa Archie narrowly escaped a fire in his bedroom. Despite being shaken and in tears, the couple then had to go out to another official engagement, she said.

Meghan said the couple had dropped Archie off at the residence where they were staying before going to an engagement, and his then nanny had taken the then four-and-a-half-month-old with her downstairs to get a snack before putting him down for a nap. While she was downstairs the heater in his nursery caught fire, in a room with no smoke detector.

Talking about the inner turmoil that public figures can experience behind the scenes, she added: “And so much, I think, optically, the focus ends up being on how it looks instead of how it feels.”
Add Comment