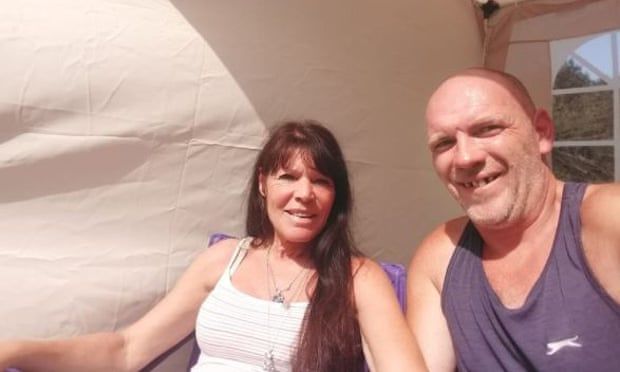 The court heard that Thomas Nutt stuffed the body of Dawn Walker in a suitcase near their home in Lightcliffe
A man has been found guilty of murdering his wife and stuffing her body in a suitcase just days after their wedding.

Dawn Walker’s body was found in a field near the couple’s home in Lightcliffe four days after she married Thomas Nutt, 45, on 27 October last year.

Bradford crown court heard that Nutt killed Walker, 52, shortly after their wedding, stuffed her body in a cupboard and later dumped it in bushes behind their West Yorkshire home. The jury reached a guilty verdict after just three hours of deliberating.

Nutt called the police on 31 October to report Walker missing. He claimed they had gone on a two-day caravan honeymoon in a layby in Skegness, where they had watched DVDs, and told officers he had driven around Brighouse, West Yorkshire, that morning to look for her.

Prosecutor Alistair MacDonald QC said the “hard and stark reality” was that the defendant “knew perfectly well that her body was lying dead in a cupboard at the marital home” because Nutt had strangled her and concealed her body.

Jurors were shown CCTV footage of Nutt wheeling a large suitcase out of the back of the couple’s home and stashing it in some nearby bushes minutes before a police officer came to his house to follow up the defendant’s missing person report.

The suitcase containing Walker’s body was later found by neighbours, who alerted the police. MacDonald said witnesses described how the couple had a “troubled” relationship and a neighbour claimed that in 2020 they had seen Walker with a black eye and heavy swelling on her face.

Nutt later confessed to killing Walker, and pleaded guilty to manslaughter but denied murder. He told officers: “We came back and she has got bipolar and is depressed, said she wanted to get divorced.

“She started screaming and I have hit her in the face and put my arm round her neck.”

The prosecutor said an examination of Walker’s body showed that she had suffered severe neck injuries, which indicated there had been “a forceful application of pressure to her neck”.

Emma Covington, senior crown prosecutor, from the CPS said: “What should have been the happiest time of Dawn’s life was instead marked by absolute tragedy, when she met her death at the hands of the man she had just married.

“Nutt first played the role of the distraught husband of a missing wife, and then concocted a web of lies to explain his actions.

“Today, the jury have agreed with the prosecution case that when Nutt struck and strangled his wife to death, he intended to cause her at least really serious harm.

“He is now facing a life sentence. We hope this will be of some comfort to Dawn’s family and friends. Our thoughts remain with them.”

Nutt will be sentenced on 19 August. Judge Jonathan Rose said he would face a life sentence, with a minimum term to be set on that date.
Add Comment