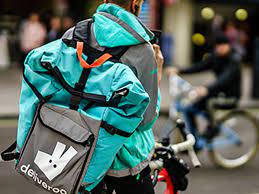 The pandemic has seen a stark increase in the number of people looking for gig economy work with searches for Uber Eats delivery jobs up 87%, and for Amazon delivery jobs up 500% on job site indeed.com.
Channel Four’s Dispatches programme tonight sees reporter Morland Sanders investigate the reality of gig work and its growing influence in the job market over the last 12 months.

Meeting current and former gig workers, Dispatches uncovers new evidence showing delivery workers feeling overworked, unsafe and under pressure to break the law, and meets NHS workers on zero hours contracts who lost all work in spite of the pressures of the pandemic.

The show also reveals an exclusive survey of gig workers reveals 46% reported being paid less than the National Minimum Wage,63% of gig workers say they have worked despite feeling too ill to do so and 81% had been physically or verbally assaulted at work; 86% say they have felt unsafe at work.

Delivery drivers and couriers are under increased pressure to break the law in order to meet targets. 65% of those surveyed say they have broken the speed limit at work while a delivery driver, speaking anonymously to Dispatches, reports delivering up to 400 parcels a day with no proper toilet breaks

Over the last 12 months, national and local level “stay at home” lockdowns have seen many of us stuck at home, and covid restrictions have forced restaurants and retailers to close their doors to customers. While high street traders have struggled, online delivery services have boomed during lockdown. Amazon’s UK sales were up over 50% to nearly £20bn, six million used Deliveroo’s app every month and orders for UberEats grew by 150%.

In the last 12 months, interest in gig worker jobs including those with delivery services has increased. In specially commissioned research from one of the UK’s biggest job sites, Indeed.com, Dispatches uncovered a surge in searches for jobs in the gig economy between February 2020 and March 2021.

Searches for amazon delivery driver jobs increased by 500%, for Uber Eats 87% and for Deliveroo 30%. On 23 March alone, the day Britain locked down, searches for “delivery” increased by 24%.

The data also suggests gig jobs could be making up a greater share of employment. While overall number of job postings have declined by almost a third during the pandemic, job postings for roles like courier and driver have remained broadly static.

Matthew Taylor, who was the government’s Director of Labour Market Enforcement, believes that gig work is set to expand even further. He tells Dispatches: “Now we’re going to have more unemployment. You’ll see more precarious work because more people will be desperate for work and they will take whatever work is available.”

Nikita Aggarwal of Oxford University thinks the future of work in Britain will increasingly involve gig jobs. She tells Dispatches: “I think ultimately we won’t really be talking about the gig economy as a separate phenomenon or a special segment of the labour market – it will be diffused throughout the economy. I think we’re going to see it gradually expand to include also higher skilled work.”

There are an estimated 30,000 on zero-hours contracts in the health service. Working with the campaign group Zero Hours Justice, Dispatches has spoken to two such workers.

“Brenda” (whose name has been changed) worked as a translator in an NHS trust on a zero hours contract. Before the pandemic, she was working six days a week at approximately full-time hours. When lockdown came into effect, “Brenda” was given a week’s notice that her work would stop.

“Brenda” tells Dispatches: “We got an email saying that we won’t get any jobs. I was only paid for paid jobs. So no job, no pay”. A month later, Brenda was informed that she would not be eligible for furlough as she was on a zero hours contract. “I was thinking, how am I going to survive? I’ve got no wage coming in from getting a full-time wage to be slashed to zero. It was a big shock.”

“Sandra” (whose name has been changed) is an NHS health visitor with decades of experience. She tells Dispatches that when the pandemic arrived, she and colleagues on zero hours contracts were told they were surplus to requirements. “Our shifts were cancelled for the rest of the month and we were told to hand in our laptops, clear our desks and go home. It was as abrupt as that. It just seemed extraordinary that our skills were being discarded in the public health crisis”.

In a statement to Dispatches, the Department of Health commented: “Due to the unprecedented nature of the pandemic, we have had to respond quickly to changing NHS staffing requirements. We are working closely with NHS Confederation and NHS trusts to protect jobs, including diverting staff to other crucial roles”

Former government advisor Matthew Taylor, who was appointed by Theresa May to lead a review into workers’ rights, believes Boris Johnson’s government is backing away from its pledge to make the gig economy fit for the future. He says: “There does seem to have been a loss of enthusiasm for what I would call the good work agenda. They want to acknowledge the public desire for better protections for the most precarious workers. But at the same time, they want to pacify business interests in their own right wing. They need to resolve that.”

In a statement to Dispatches, the UK Government said: “We continue to consider options to improve clarity around employment status and will bring forward an Employment Bill to further enhance workers’ rights as soon as parliamentary time allows.”
#Covid  #Boris Johnson
Add Comment