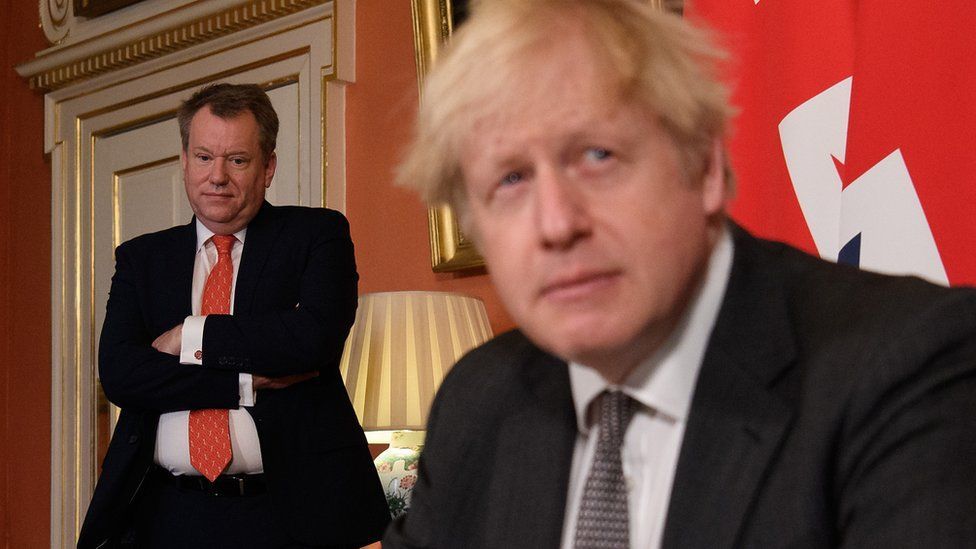 In a letter to Mr Johnson, Lord Frost said that while "Brexit is now secure" he had "concerns about the current direction of travel".

The Mail on Sunday, which first reported the news, said he handed in his resignation a week ago, partly in disagreement with Covid curbs.

In his letter, Lord Frost, who attended cabinet, said his resignation would take "immediate effect" and spoke of his belief the UK needed to "learn to live with Covid".

He added that measures to reopen the economy in July "did not prove to be irreversible" - adding: "I hope we can get back on track soon and not be tempted by the kind of coercive measures we have seen elsewhere."

Responding to Lord Frost, Mr Johnson said he should be "immensely proud of your historic service to this government and this country".

It comes after a week where the prime minister suffered a by-election defeat with the Conservatives losing the previously safe seat of North Shropshire - which the party had held for nearly two centuries - to the Liberal Democrats.

He also endured the biggest rebellion of his premiership so far when many of his own MPs voted against the government over the introduction of so-called Plan B curbs in England.

A total of 99 Conservatives voted against the government, but the measures - including Covid passes at larger venues - passed by a majority of 243 thanks to Labour support.

Lord Frost had most recently been engaged in negotiations with the EU over post-Brexit arrangements.

This included elements of the Northern Ireland Protocol, agreed by the UK and EU in 2019, that allows goods to cross the border between Northern Ireland and the Republic of Ireland without checks.

The protocol has been criticised by some businesses for making it more difficult to send goods to Northern Ireland from Great Britain.

Sir Jeffrey said Mr Johnson "must now urgently decide which is more important - the Protocol or the stability of the political institutions".

"The North will not be collateral damage in the Tory chaos," she added.
line

Who will replace UK's combative negotiator?

Lord Frost is seen as a combative figure in Brussels. Many on the EU side won't miss him.

His departure is also likely to strengthen the European Commission's hand in negotiations about the Northern Ireland Protocol.

Lord Frost's fingerprints were all over the UK's original demands and approach. What's the British position now and who's in charge?

In recent weeks, there has been a shift in tone from the UK side. The continued assertion, that the UK might suspend parts of the Protocol through what is known as Article 16, became less… well, assertive.

Lord Frost's stance on Article 16 also appeared to be undermined by comments coming from some fellow ministers.

Meanwhile, the UK's Brexit position seemed to be softening, but seemingly not always with the Brexit minister's consent.

While Lord Frost is said to have been unhappy with the broader political direction of Boris Johnson's government, the recent developments on Brexit talks should not be ignored.

Now the big question, who will come next?

Backbench Tory MP Andrew Bridgen said Mr Johnson was "running out of time and out of friends to deliver on the promises and discipline of a true Conservative government".

"Lord Frost has made it clear, 100 Conservative backbenchers have made it clear, but most importantly so did the people of North Shropshire," he wrote on Twitter.

Conservative MP Simon Hoare, who chairs the Commons Northern Ireland Select Committee, said Lord Frost was "unsuited to the 'doing of politics'" and "never understood the need for personal rapport or the importance of trust".

What is the latest on post-Brexit talks?

Lord Frost had recently been locked in tense rounds of talks with European Commission vice-president Maros Sefcovic as the UK and the EU attempt to close gaps in post-Brexit arrangements.

On Friday, the UK government indicated the European Court of Justice could have a role in the Northern Ireland Protocol - a deal agreed between the UK and EU in 2019.

That could mean the court ruling on issues of EU law, but not having the final say in disputes over the protocol.

Indicating his frustration in a statement on Friday, Lord Frost said there had been some progress over solutions to outstanding issues "but not as much, and not as quickly as we had hoped".

In what Lord Frost described as the "main area of progress", the EU has said medicines will continue to be available in Northern Ireland at the same time as in the rest of the UK.

But he added: "Overall, with the potential exception of medicines, I do not believe that the negotiations are yet close to delivering outcomes which can genuinely solve the problems presented by the Protocol."

He concluded by saying it was disappointing that a comprehensive or worthwhile agreement with the EU had not yet been reached and that a "solution needs to be found urgently early next year".