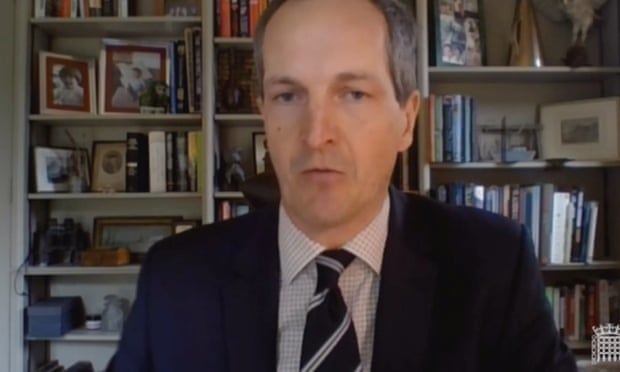 Labour renews calls for health minister, already under pressure over use of private emails, to be sacked

A health minister is facing fresh calls to lose his job after it emerged that he apparently failed to declare a week’s worth of meetings with companies who went on to be granted £1bn contracts.

Labour, who had already been demanding that Lord Bethell be fired for using his private email account for ministerial business, are again demanding his removal. The deputy leader, Angela Rayner, accused the Tory donor of “treating the public purse like his personal cashpoint”.

Bethell, who oversaw the award of Covid contracts, has been under pressure for a number of days now. As well as the use of private emails, he has also come under fire for sponsoring a parliamentary pass for Hancock’s aide Gina Coladangelo, with whom the former health secretary had an affair.

At least nine of the undeclared meetings were with firms who later obtained millions of pounds worth of Covid contracts, according to Byline Times.

The commission has been blamed on an “administrative error” and the official records have now been updated for the missing week at the beginning of April last year.

On Tuesday, Downing Street admitted that Bethell had used private emails for government business despite denying it 24 hours earlier. But it defended him, saying he had abided by the guidance.

On Monday, the Guardian revealed that a number of emails were copied into Bethell’s private email account. His address was copied into at least four official exchanges relating to a businessman who was attempting to win government contracts during the pandemic.

Rayner launched a blistering attack on the health minister on Twitter on Wednesday evening. She said: “Matt Hancock’s mate and donor [Bethell] – the minister who handed out taxpayers’ money on his private email – had 27 meetings with companies and didn’t declare them. The companies were given over £1bn in contracts. Lord Bethell must be sacked and this racket must end now.”

She said Johnson had already showed that he “lacks the leadership qualities required” of a prime minister by failing to sack Hancock.

“Lord Bethell has been treating the public purse like his personal cashpoint, using his private email to hand out contracts & not declaring meetings,” she said. “Lord Bethell must be sacked immediately, and we need a full and independent inquiry into the private emails and undeclared meetings across government that have seen taxpayers’ money handed out to Conservative cronies.”

A Department of Health and Social Care spokesperson said: “One week’s worth of meetings from Lord Bethell’s returns were not included in the previous transparency returns, due to an administrative error.

“This has now been corrected with the full list of meetings, including those from 1-5 April, available to review in the usual way.”