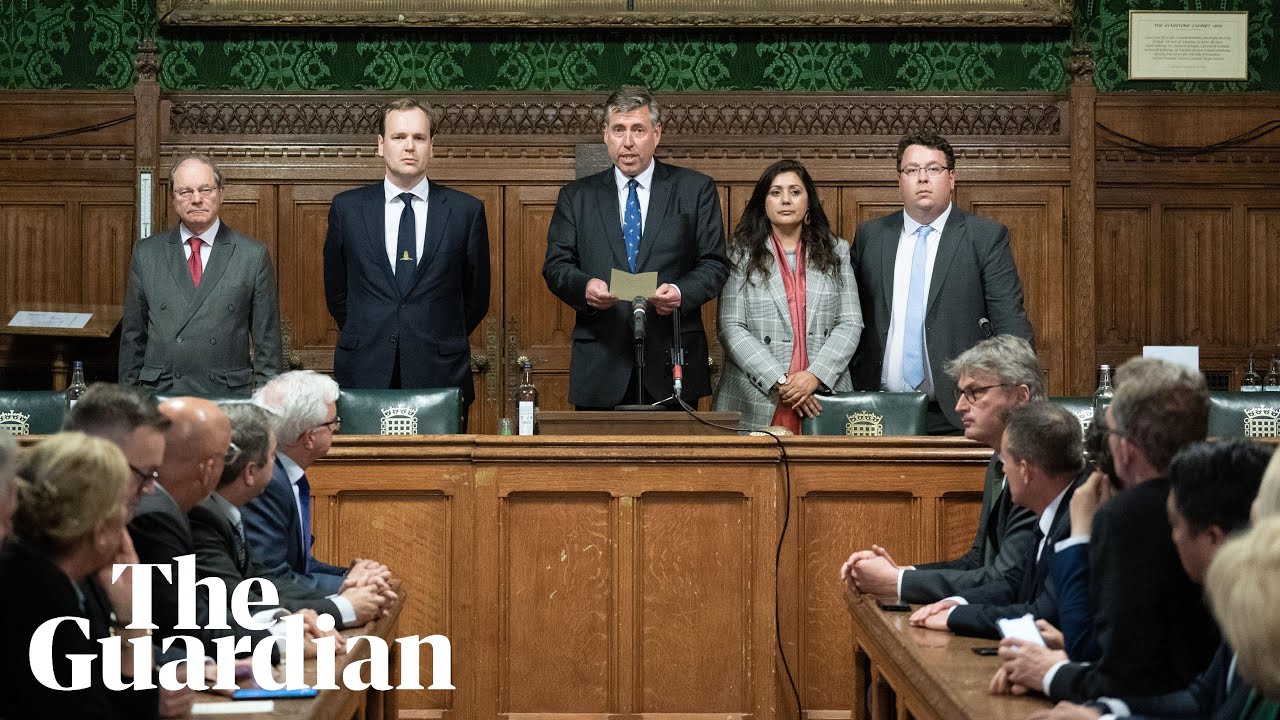 ‘Long time coming’: how day of Tory infighting played out

As MPs met in small packs to plot in the atrium of Portcullis House over breakfast coffee, the mood among Boris Johnson’s loyalists was upbeat. There were confident predictions that the prime minister could keep the rebel numbers below 100.

By the time the prime minister left the 1922 Committee, the new line was that one vote was enough. It was a measure of how a seemingly chaotic, rudderless rebel operation had managed to sow enough doubt in the minds of their colleagues – with a counter-bid that relied on raw numbers and aimed to demonstrate Johnson was an electoral liability.

The prime minister’s number crunchers got him over the line – but they were way wide of the mark in their prediction. The result is almost the worst possible. 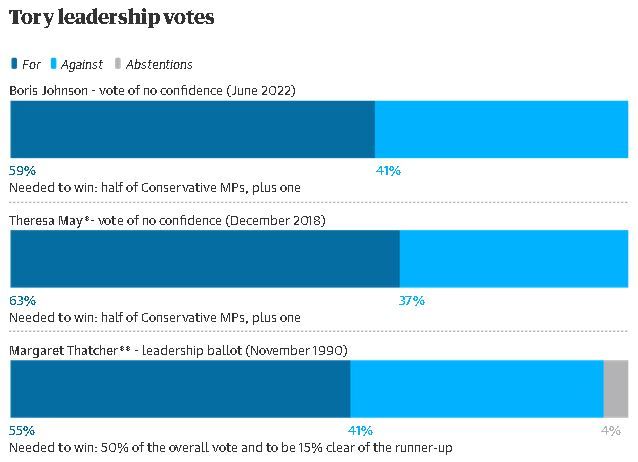 Some of Johnson’s most determined opponents were in parliament early for their colleagues’ arrival. They knew the 54 threshold was far exceeded. “We overshot by a lot,” one said. “Lots of the letters were postdated until after the jubilee. We are as ready as we could have been. It’s been a long time coming.”

One former minister who had seen an early rebel spreadsheet said much would depend on the prime minister’s overtures to colleagues over the course of the next few hours.

“We are aiming for 130 – if we exceed that it goes beyond our expectations. I’ve seen numbers a lot higher than that. If you go around briefing that there is less than 100 MPs going against you, then you are in for a shock.”

Leadership candidates had also quietly made tentative preparations. At least three candidates had websites ready to launch and have courted donors over the past few weeks, one ambitious MP claimed. “I don’t buy the line that everyone should be terribly coy. If you want to be the prime minister, you should be ready to make the case.”

But at dawn it was the prime minister who held an advantage. He was told on Sunday he would face a vote, after a call from Sir Graham Brady in late afternoon before departing to watch the jubilee pageant. Only afterwards did he call his team and fire the starting gun on a long-prepared plan.

The strategy had been devised by Lynton Crosby, with prepared lines drafted by senior aide Ross Kempsell, freshly returned from advising the Australian Liberal party.

Grant Shapps, the transport secretary, took charge of the spreadsheet of backers. Inside CCHQ on Matthew Parker Street party chiefs began ringing round association chairs, convincing them to make the PM’s case to their MPs.

There were carefully placed “properties” – an opinion piece by the chief of staff, Steve Barclay, on ConservativeHome, a letter from Tory donors in the Sun. By the time most MPs had battled tube strikes to get into their offices, cabinet ministers and backbench loyalists came out of the traps with a flurry of tweets.

The mood was changing. A cabinet minister wandering towards the coffee queue in Portcullis House was told about the briefing about there being fewer than 100 rebels – and remarked it was “foolish”.

By mid-morning, MPs from all sides swarmed into the atrium of Portcullis House. The prime minister’s PPS Joy Morrissey greeted colleagues with an enthusiastic smile, and other Johnson-backing ministers like James Cleverly and Will Quince worked the room.

There were certainly those who feared recrimination if there was no swift demonstration of public loyalty.One cabinet minister told of some panic when they tried to compose their supportive tweet en route to London from the constituency – and then found their train entering a long tunnel.

Another Johnson supporter, who had been planning to make a leisurely trip back from their northern constituency, spoke of flinging a suitcase into the back of the car to drive 250 miles at breakneck speed.

Some of the prime minister’s opponents were also working the corridors, including Tobias Ellwood, who had denounced his party’s leader from the Commons benches. But most of his critics kept their operations close, in their parliamentary offices.

One former cabinet minister – no fan of Johnson – crept down the stairs from their office towards the coffee queue and retreated with haste after seeing the pack of journalists.

Though there is no rebel WhatsApp group, there were different senior figures doing the maths to try to oust the prime minister.

The vote has deeply divided colleagues from the 2019 election. “My seat is fucked. Even if Boris wins then Labour will put on their leaflets that all these MPs thought he was not a fit prime minister,” one of Johnson’s supporters said.

Another MP from that intake said he believed 40% of the new MPs were planning to vote against the prime minister – a staggering indictment on his ability to hold goodwill.

“Frankly anyone would be better in my seat, Penny, Nadhim, Tom Tugendhat, maybe even Liz,” the MP said. “We had to bring this to a head.”

He said that critics would be silenced – if the PM won convincingly. “I will move on if the PM wins well – if he wins two-thirds. I won’t like it, but I won’t be an idiot like David Davis, grumping along on the backbenches.”

A former minister who said he would vote against the PM said he had felt tortured in conversations with constituents over the jubilee weekend. “People saying, you’re a good MP, we can’t vote for you while he’s leader. About 40% of my soft voters are in that category. The contamination will only grow.”

Johnson made his first appearance in public just after 4pm on the first floor of Portcullis House, entering with a guard of honour – Rishi Sunak, Liz Truss, Barclay – in a show that his most ambitious rivals were still believers.

Addressing his MPs, Johnson went on the attack. He was bombastic about his actions, pledged future tax cuts and said he did not regret attending his staff’s leaving do.

Johnson was defiant, telling Harper: “I’d do it again.”

Sir Charles Walker, who had denounced the prime minister’s lockdown strategy on the floor of the Commons, told his colleagues he thought they should accept the PM’s apology.

“At times you’ve driven me absolutely wild,” he said to laughter. But he warned: “Defenestrating a PM is a horrible, terrible thing.”

As MPs filed out of the room, two old comrades were briefing journalists on opposite sides – Steve Baker and Jacob Rees-Mogg – both veterans of the plot against Theresa May. Baker said he thought there were many minded to forgive. But he said he could not.

Rees-Mogg replied: “I am afraid I think that Steve has simply got it wrong. I think some of my colleagues are risking the Brexit we fought so hard for.”

Johnson could survive winning with just one vote, Rees-Mogg said. “One is enough. What does a Frenchman have for Brexit – one egg is un oeuf.” It was a marked change of approach.

As MPs trickled out of the 1922, David Canzini and Barclay were in furtive conversations with agonised-looking MPs.

Johnson retreated to his House of Commons office for one-on-one time with wavering colleagues.

But it was clear the mood was darkening. MPs questioned why they had not been canvassed by the prime minister. “I was expecting at least to be asked,” one smiled en route to cast their ballot. Another “red wall” MP – who has privately submitted a letter – said no whip had been in touch to even enquire about his position.

By 10 to 6pm, a small queue had already formed at the door of committee room 10, where MPs had their phones confiscated. Rumours had circulated that whips wanted a picture of the ballot paper to prove loyalty.

Sir Peter Bottomley, the father of the house, was at the front of the line, along with some of Johnson’s staunchest supporters in the red wall – Stuart Anderson, Chris Clarkson, Eddie Hughes – all greeted by Morrissey, who counted MPs in.

The queue to vote snaked down the main corridor, though cabinet ministers attempted to skip the line, including the deputy prime minister, Dominic Raab. May arrived in full embroidered ball gown and glittery heels – not a celebration of the difficulties of her rival she insisted, but a prior engagement. Still, her colleagues in the queue could not hide their amusement.

At 9pm, Brady read the result in the wood-panelled room where May also learned her fate three years earlier. The room was packed with Johnson’s backers, who cheered at the verdict – “the Conservative party does have confidence in Boris Johnson”. But many could not hide their gasps at the rebel numbers – 148.

Ministers looked ashen as they hurried from the room.