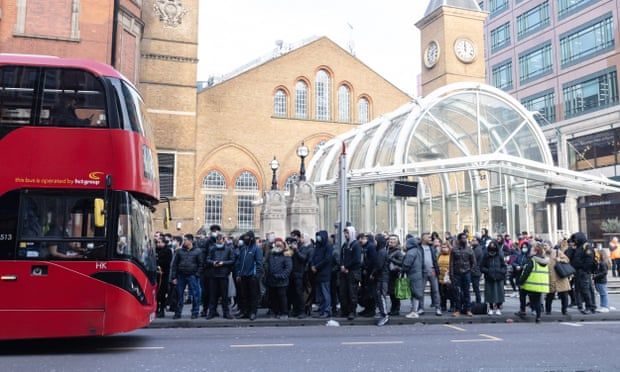 Most London Underground services come to halt again as about 10,000 RMT members go on 24-hour strike
Londoners have struggled for a third day to move around the capital as a strike by tube workers brought much of the transport system to a standstill.

Most London Underground services were completely halted on Thursday as about 10,000 staff in the RMT union went on a second 24-hour strike this week, following a walkout on Tuesday, in a row over jobs and pensions – a stoppage that also led to widespread disruption for Wednesday morning rush hour.

Queues and congestion appeared slightly less severe on Thursday, with finer weather encouraging more to heed Transport for London (TfL) advice to walk or cycle for essential journeys or to work from home where possible.

The number of bus journeys recorded in the morning rush hour fell by 200,000 from Tuesday’s 1.51m, when many commuters had pursued alternative journeys, pushing bus patronage up to 85% of normal pre-pandemic levels – the highest weekday since March 2020.

Many people struggled to board overloaded buses in areas where tube stations were closed on Tuesday, possibly deterring them from attempting similar travel on the second strike day.

TfL had warned people to expect all tube services across the capital to be suspended on Thursday, but was managing to run limited trains on some outer, overground stretches of the District, Central, and Northern lines. London Overground services were running normally, unlike on the first strike day when some stations with tube interchanges were affected.

At Oxford Circus, in the centre of London, staff on the picket line said the action was in passengers’ interests – although those struggling to get around disagreed.

Daniel Randall, 35, an RMT member on the tube station’s picket line, told PA Media: “We’re standing up for a properly funded, properly staffed tube system, and we feel that’s very much in passengers’ interests as well as our interests.”

But Sharon Lennox, 31, a security officer waiting for a bus nearby, said: “It is OK for some. I am not one of those who are lucky enough to work from home. I have been tapping on the bus doors and the drivers pretend they can’t see.”

The strike comes after the RMT union said its members were faced with paying the price for a financial crisis after the Covid pandemic, after TfL agreed to reduce posts and look at pensions as a condition of the emergency funding given by central government.

The London mayor, Sadiq Khan, has agreed to review TfL’s pension scheme and cut staffing levels by about 10% by not replacing staff who leave or retire.

The RMT general secretary, Mick Lynch, said: “Our members across London Underground are making it crystal clear again this morning that they are not going to be used as pawns in a political fight between the mayor and the government which threatens their futures and their livelihoods. The funding crisis at TfL which is at the heart of this dispute is not of our making, and our members are not prepared to take a hammering to pay for it.”

Andy Lord, TfL’s chief operating officer, apologised to customers over the “completely unnecessary” strike, adding that TfL had not proposed any changes to pensions or terms and conditions, and nobody would lose their job.

During early morning rush hour on Friday, there is expected to be similar disruption to that on Wednesday, with tube services only starting from 8am, according to TfL.
#Covid
Add Comment