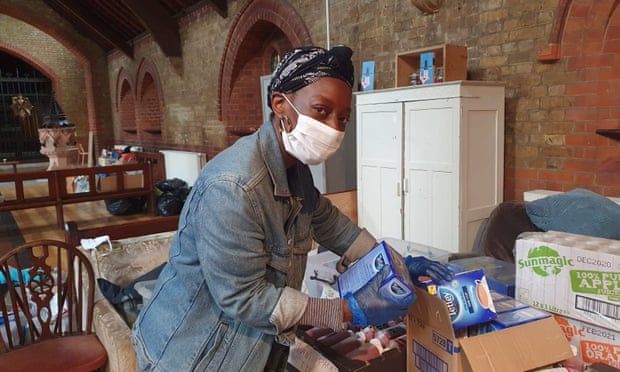 The Tories have held Wandsworth for more than four decades, but Boris Johnson’s lockdown woes and the cost of living crisis threaten to tip the balance towards Labour

In many ways, the London borough of Wandsworth is a paradigm of the modern capital. On one hand, it is a place where a teenager recently fainted from hunger in a food bank queue. And on the other, it is home to the “sky pool”, a spectacular transparent swimming pool suspended 10 storeys above ground in Nine Elms, and reserved exclusively for the development’s richest residents.

The borough is also known for its comparatively low council tax – which, its Conservative-run council boasts, is the lowest average council tax in the country. Wandsworth also claims to be the only local authority in London that is cutting its share of council tax bills.

“You look at the housing down here and wonder: ‘How much is for normal people?’ It looks like investment housing more than anything else,” said Yahan Lewis, 53, sitting on a park bench opposite Southside shopping centre after a visit to the jobcentre. “I always think it’s the money borough. It’s all about money. They keep the rates low and people vote for them.”

Perhaps that is why, after more than four decades in charge of Wandsworth borough council, the Tories have proved immovable. Despite all three of its parliamentary constituencies being held by Labour – the Tories lost Battersea to Labour in 2017 and Putney two years later – and residents voting for Labour mayor Sadiq Khan, the council has remained firmly in the hands of the Tories.

But amid anger over Partygate and as the cost of living crisis bites, this leading Tory council – one of a handful in London still under Conservative control – is on a knife edge. And on 5 May it could turn red for the first time since 1978 – potentially spelling disaster for the Tories and making it a key target for Labour.

Robert Hayward, the Tory peer and pollster, said that Wandsworth was home to many of the kinds of traditional Tory voters that were now turning against Boris Johnson – namely, pro-remain women aged between 40 and 55.

He also said the Conservatives were trying to make the campaign in the capital about their historic commitment to keep council tax down – and to blame Khan for increases. He says the race remains a close and unpredictable one.

“It is Partygate versus low council tax,” he said. “That is essentially what the battle is. There were so many wards which were split or unbelievably close last time. The Labour party actually won more votes than the Tories [but gained them in the wrong places]. If the Conservatives just lose Wandsworth and they do well in other parts of the country, it will be a disappointment, but nothing more than that.”

However, he went on: “If it is the top of a broader picture, it becomes emotionally very different.”

The latest polling conducted in London suggests that Labour is doing slightly better than in 2018, the last time the same elections took place, but not by a large margin. The party did well that year, in the wake of Theresa May’s disastrous 2017 general election campaign. An Opinium poll for Sky News gave Labour a 20-point lead. Back in 2018, Labour secured a 15-point lead.

One senior Tory, a veteran of London politics, said the changing demographics of Wandsworth would make it harder for the Conservatives. There was also increasing weariness over Partygate, he said, adding that more fines for the prime minister could make a difference as polling day approaches. 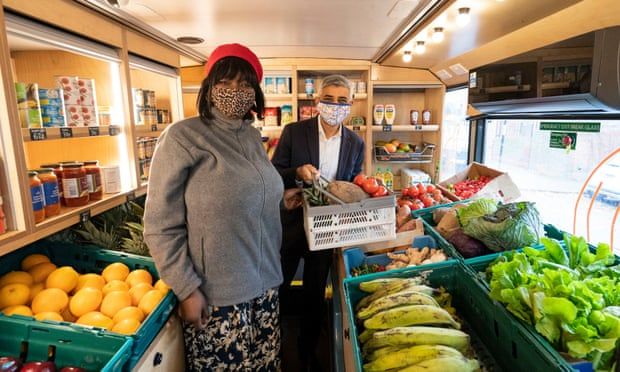 Sadiq Khan and Kemi Akinola on board the Wandsworth food bus, which delivers food to deprived areas.

Which is perhaps why Tories in seven London boroughs – including Wandsworth – will be listed as “local Conservatives” on the ballot paper rather than the “Conservative party candidate”, seemingly in an attempt to distance themselves from any toxicity of the national brand.

But the Conservatives may struggle to pull in people they have previously counted on. On the newly pedestrianised Old York Road in the centre of the borough, where cyclists whiz past people dining outside delis, cafes and restaurants amid strategically placed planting, Liam Garrett, 30, said he did not know the local elections were coming up.

The marketing business owner said he was fed up with all the talk of Partygate, which was “over the top”. He added: “It just needs to end as quickly as possible. There are far more pressing issues.”

While he thinks Wandsworth council does a good job, particularly on council tax costs, he does not usually vote in local elections.

Daisy Talbot, a 20-year-old Durham University student at home for the Easter holidays, voted Conservative previously, but this time around says she would not feel good about voting for them. “There’s definitely a shift,” she said, adding that, like her, many of her friends in the area would no longer vote Conservative. “Now, given lockdown especially and us being students, we feel like our age group hasn’t had much attention.”

During the period when Johnson attended parties in lockdown, some of her friends were expelled from university for mixing. “I would feel guilty if I was complaining all the time and voted for them.” In contrast, she thought Keir Starmer was doing a good job: “He’s becoming a figure I’m much more aware of.”

Life is hard for many Wandsworth residents: as people with mortgages start to join the queues for food banks, there is a lot more on people’s minds than parties.

Charlotte White, 48, manager of Earlsfield food bank, said housing was a huge issue in the area and people were struggling with increasingly complex problems as a result of the cost-of-living crisis.

“It’s not just our numbers that are going up, but the complexity of problems. People are coming in with complicated issues and the support simply isn’t there,” she said. “I think people wanting better solutions to those problems might have an effect on how they vote.”