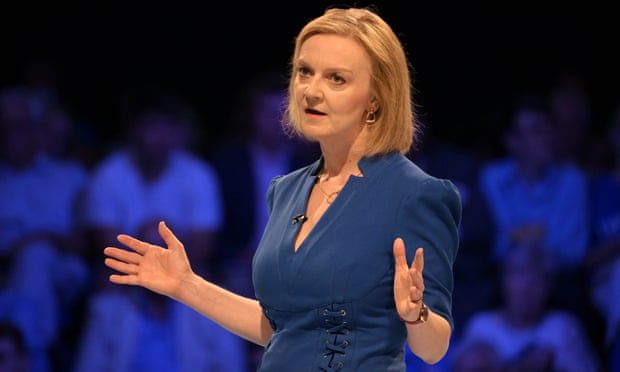 Rishi Sunak’s campaign called the policy a “dramatic U-turn [which] reveals more than a change of heart” and said it could have a high cost to the party. “If this was in a general election, it would have been a potentially fatal own goal for the Conservatives.”

A spokesperson for Truss’s leadership campaign said there had been a “wilful misrepresentation of our campaign” – without giving specifics – but confirmed she was abandoning plans for regional pay boards for civil servants or public sector workers.

“Red wall” MPs including Jacob Young and Richard Holden raised alarm at the policy announced overnight, as well as the former cabinet minister Simon Hart, who said it would amount to cuts of nearly £3,000 for workers in Wales.

Her opponent Sunak’s campaign said the £8.8bn in savings on pay outside London touted in a release by Truss on Monday night could only be made with cuts across the whole public sector, including teachers, nurses and the armed forces, estimating an average of about £1,500 each for employees outside south-east England.

By midday on Tuesday, Truss’s campaign admitted it would ditch the plan and said it had not been the intention to cut pay.

“Current levels of public sector pay will absolutely be maintained,” a Truss spokesperson said. “Anything to suggest otherwise is simply wrong.

“Our hardworking frontline staff are the bedrock of society and there will be no proposal taken forward on regional pay boards for civil servants or public sector workers.”

The first major gaffe from Truss, who is the favourite to win the race, delighted some MPs supporting Sunak – with one calling it her “dementia tax moment”, referencing the time the former Conservative prime minister Theresa May was forced to U-turn on her social care policy.

Sunak’s campaign also suggested Truss had pushed for the policy in 2018, when she was chief secretary to the Treasury. “This wasn’t a mistake, Liz wanted this in 2018 as CST. The lady is for turning,” a campaign source said, in another pointed reference to Thatcher.

Sunak’s spokesperson said the policy showed Truss’s flaws as a candidate. “It demonstrates a lack of serious judgment by setting out plans that would see pay dramatically cut for police, nurses and our armed forces in Cardiff and Canterbury, Teesside and Taunton during a cost of living crisis. It also shows a worrying lack of grip on detail in what is already a woolly economic plan.”

After the policy was announced overnight, Ben Houchen, the Tees Valley mayor and a backer of Sunak, said there was no way the figure could be achieved without pay cuts outside London that would hit levelling up.

“Actually speechless,” he tweeted. “There is simply no way you can do this without a massive pay cut for 5.5 million people including nurses, police officers and our armed forces outside London. So much that we’ve worked for in places like Teesside would be undone.”

Holden, the MP for North West Durham, said Truss must “dump the policy”, saying the only way savings could be achieved would be pay cuts for doctors and nurses and police officers. Chris Clarkson, the MP for Heywood and Middleton, said: “I’m not sure a promise to cut people’s pay based on where they live will survive first contact with focus groups, let alone reality.”

Young, the MP for Redcar, tweeted: “Doubt this is the vision of ‘hope’ Penny Mordaunt spoke about yesterday … Hope for Northerners pay being cut? [Truss] needs to row back from this policy urgently.”

Jacob Rees-Mogg had earlier denied Truss plans to slash the pay of public sector workers outside the capital by introducing regional pay boards, but then refused to say how billions of promised savings could be made.

The original policy release from Truss said it could be “adopted for all public sector workers in the long term”.

Sunak’s campaign said to achieve the £8.8bn saving, civil service salaries would have to be halved. The policy is believed to have been based on a Taxpayers’ Alliance report that looked across the whole public sector workforce with no exceptions.

Signs the policy was in difficulty began on Tuesday morning when Rees-Mogg, a backer of Truss and the minister in charge of civil service efficiencies, said it was “not the plan at the moment” to cut pay for the wider public sector to make savings of £8.8bn promised by Truss. “The discussion at the moment is around civil servants,” he said.

In the original release, which proposed regional pay boards, Truss said she would “tailor pay to the cost of living where civil servants actually work” and this would save up to £8.8bn.

Experts have said that figure is not feasible for civil servants alone. Alex Thomas, a programme director at the Institute for Government thinktank, said the whole annual civil service pay bill was about £9bn.

Labour said the original plan would have meant a £7.1bn hit to local economies across Yorkshire, the north and the Midlands. Angela Rayner , Labour’s deputy leader, said: “Liz Truss is a liability who has lingered in this Tory cabinet for nearly a decade in which the Tories have fuelled a cost of living crisis.”
Add Comment