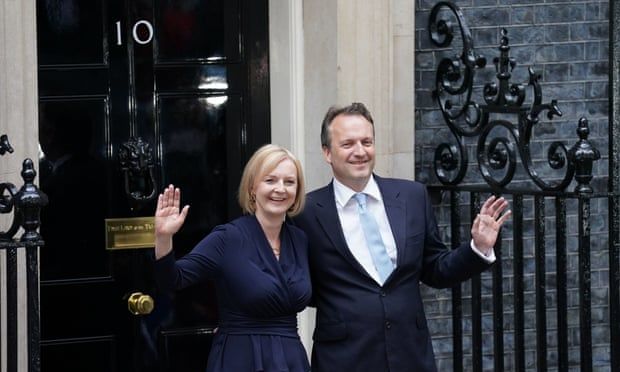 New PM also pledges to urgently tackle energy crisis with plans to freeze bills at about £2,500 a year expected within days

Liz Truss insisted the UK will “ride out the storm” of the worst cost of living crisis in a generation as she launched her premiership with a brutal cabinet clear-out.

In her first address as prime minister in Downing Street, she pledged to be “hands on” in urgently tackling the energy crisis with plans to freeze bills expected within days, as her survival in No 10 depends on them.

Truss is expected to announce plans to freeze energy bills at about £2,500 a year until 2024 in the first major act of her premiership – but is unlikely to claw back the cost through customers’ future bills, leaving the taxpayer to pick it up instead.

Within moments of taking over, Truss was putting the finishing touches to her cabinet which saw close ally Kwasi Kwarteng appointed chancellor, Suella Braverman, who stood against her in the leadership contest, taking over from Priti Patel at the Home Office and James Cleverly promoted to foreign secretary.

Her closest political ally, Thérèse Coffey, takes over from deputy prime minister Dominic Raab after he described Truss’s tax plans as an “electoral suicide note”. She also takes on the role of health secretary. The appointments mean that for the first time in history none of the great offices of state are held by white men.

However, Tory MPs and green campaigners were alarmed by the new business secretary Jacob Rees-Mogg, who has decried “climate alarmism”, being handed direct responsibility for energy and climate change, after she struggled to find a dedicated minister to fill the role. Alok Sharma has been reappointed chair of Cop26, the UN climate change conference.

Truss rejected calls to appoint a unity cabinet to bring the party together after the bruising leadership contest by sacking all the major cabinet-level supporters of her leadership rival Rishi Sunak, including Dominic Raab, Grant Shapps, Steve Barclay and George Eustice, while the former chancellor himself ruled out of taking a role.

Instead she appointed loyalists including Ben Wallace, staying on as defence secretary, Wendy Morton as the Tories’ first woman chief whip, and Brandon Lewis, who infamously admitted the government would be willing to break the law in a “specific and limited” way, as justice secretary.

Penny Mordaunt, who Truss beat to make the final two in the leadership contest, was rewarded with leader of the Commons, while Johnson stalwart Kit Malthouse will become education secretary. Nadine Dorries quit as culture secretary and is expected to go to the Lords, prompting a byelection, with Michelle Donelan taking over her job.

Jake Berry, chair of the Northern Research Group, was appointed Tory party chair in a move to shore up support in “red wall” areas, while Simon Clarke is the new levelling up secretary.

Truss now faces the difficult task of winning over disenchanted Tory MPs, who she will rely on to get her energy package through the Commons, inheriting a deeply divided party lagging behind Labour in the polls, ahead of a reshuffle of the junior ministerial rankson Wednesday.

After narrowly avoiding heavy downpours outside Downing Street, Truss told assembled Tory MPs, aides and the world’s media: “We shouldn’t be daunted by the challenges we face, as strong as the storm may be. I know that the British people are stronger.

“Our country was built by people who can get things done. We have huge reserves of talent, of energy, of determination. I am confident that together we can ride out the storm.”

The £400 universal handout to be given to households this autumn is expected to be factored in, so the energy price cap would effectively be maintained at about the current £1,971 rate.

Conservative sources confirmed that wholesale gas prices could be capped, meaning the new prime minister’s plan would also help thousands of small businesses teetering on the brink of collapse.

However, the scheme, which could cost as much as £100bn, is expected to be paid for through extra borrowing, after Kwarteng made the case for some “fiscal loosening” given the scale of the economic crisis. Tory aides suggested plans were not yet “nailed on”.

In her address, Truss promised she would take “action this day and every day” to transform the country into what she called an “aspiration nation”, touching on plans for major economic reform.

Tory insiders suggested she would launch a policy blitz over the next three weeks before the Conservative party gathers in Birmingham for their annual conference. She will have to navigate an overwhelming in-tray with soaring inflation and energy bills, the prospect of an autumn of strikes, the NHS and ambulance services on their knees and the conflict in Ukraine showing no sign of easing. Her first call to a world leader was with Volodymyr Zelenskiy, the Ukrainian president.

Truss took over as prime minister after meeting the Queen at Balmoral, where she was asked to form a government following the resignation of Boris Johnson, who was ousted by Tory MPs earlier this summer after a series of scandals.

She returned immediately to Downing Street by private jet for her first address to the nation in her new role, narrowly avoiding a thunderstorm that initially seemed to have forced her inside to deliver her speech.

Johnson used his own speech on departing No 10 to call on the Tory party to unite behind Truss, but he could not conceal his bitterness at the way he was ousted.

The outgoing prime minister gave his strongest hint yet of a planned return to frontline politics as he likened himself to a Roman statesman who was called back for a final battle.

Friends, including loyal MPs, said Johnson was holding out hope of a return to No 10 should Liz Truss flounder before the next election. One Tory insider said: “Darn right he wants another go. They are waiting to see how Liz does but if she doesn’t do their bidding, Boris will be dusted off.”

But others have counselled against him plotting a return. A friend of Johnson’s said: “He’s delusional. He needs therapy if he thinks what the country needs right now is Boris back in No 10.”

Johnson spent his final hour in No 10 having bacon sandwiches with his wife, Carrie, and some of his closest aides and MPs, including Dorries and Rees-Mogg, who brought his eldest son along. Some came with leaving presents for Johnson and asked for selfies.

In a message to Conservative MPs, Johnson said it was “time for politics to be over” and said they must back Truss and deliver for the country. “That is what the people of this country want, that’s what they need and that’s what they deserve.”

He added: “I am now like one of those booster rockets that has fulfilled its function and I will now be gently re-entering the atmosphere and splashing down invisibly in some remote and obscure corner of the Pacific.”