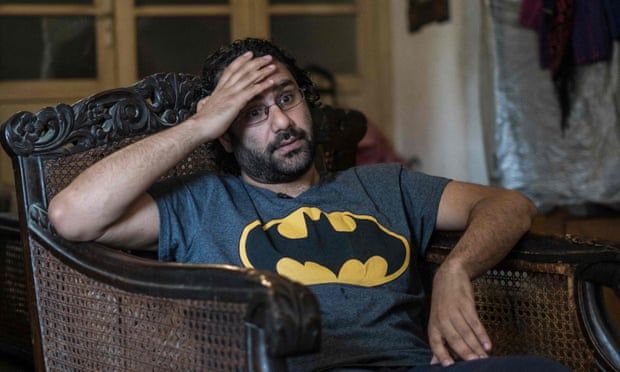 The family of the British activist Alaa Abd El Fattah have accused the foreign secretary, Liz Truss, of ignoring his case in favour of her bid to lead the Conservative party, as he reached his 114th day of a hunger strike inside Egypt’s Wadi El Natrun desert prison.

Abd El Fattah, a figurehead of Egypt’s 2011 uprisings, has spent most of the last decade behind bars and last December was sentenced to a further five years in prison on charges of terrorism and “spreading false news” after sharing a social media post. He gained British citizenship while incarcerated last year, but British officials have since been stonewalled by the Egyptian side when attempting to visit him in prison.

Since Truss launched her leadership bid on 11 July, there is little evidence that she has engaged with Abd El Fattah’s case while each passing day raises the risk that he will die in prison.

“He has passed the 110-day threshold. These are ridiculous numbers,” said Mona Seif, Abd El Fattah’s sister. “It feels like since the race for the Tory leadership began, Truss has completely abandoned Alaa’s case.”

Truss told parliament in late June: “We’re working very hard to secure his release,” and raised Abd El Fattah’s case during a meeting with the Egyptian foreign minister, Sameh Shoukry, in London on 5 July, prior to a meeting discussing UK-Egypt trade deals. UK-Egypt trade was worth £3.3bn last year, while Britain has approved £149m in weapons licences to Egypt since 2019.

Sanaa Seif, Abd El Fattah’s sister, who also gained British citizenship last year, said: “The UK embassy team in Cairo continue to be responsive but that’s been the case from day one. It’s always been the Foreign, Commonwealth and Development Office in London that’s been slow. I thought that would change when the foreign secretary told parliament that she’s working on release, that the clock would really start ticking, but nothing has happened.”

Despite pledging to take up Abd El Fattah’s case in June, Truss is yet to meet with his family. The Foreign Office minister Lord Ahmad of Wimbledon promised to debrief Abd El Fattah’s family since he also met with Shoukry in early July, but that has not happened.

“Truss hasn’t responded to our request for a meeting either positively or negatively – but the slow pace is really worrying. There is no question that the British government needs to act with more urgency,” said Sanaa Seif.

The shadow foreign secretary, David Lammy, said: “These are serious times and the role of foreign secretary is far too important to be a part-time job. Alaa’s desperate situation has not been put on hold for the Tory leadership election. He needs the urgent intervention of the government now, starting with a meeting with Alaa’s family.”

A Foreign Office spokesperson declined to provide any examples of Truss or Ahmad’s engagement on Abd El Fattah’s case since Truss began her bid for the leadership of the Conservative party, or since their respective meetings with Shoukry in early July.

“The UK government continues to raise Alaa Abd El Fattah’s case at the highest levels of the Egyptian government, including in the foreign secretary’s recent meeting with the Egyptian foreign minister. We are working urgently to secure consular access to Mr Abd El Fattah and are urging the Egyptian authorities to ensure his welfare needs are met,” they said.

Richard Ratcliffe, who previously staged a sit-in and hunger strike outside the FCDO to demand Truss’s engagement to free his wife, Nazanin Zaghari-Ratcliffe, when she was held in Iran, said: “The fundamental problem is not the minister, but the approach of the government. The advice to vulnerable people to keep quiet while their loved ones are abused is deeply cynical.” Zaghari-Ratcliffe was freed from detention and returned to the UK in March.

“Government policy is effectively to gaslight [families of detainees], and value good relations and business opportunities with those in power elsewhere,” Ratcliffe said.