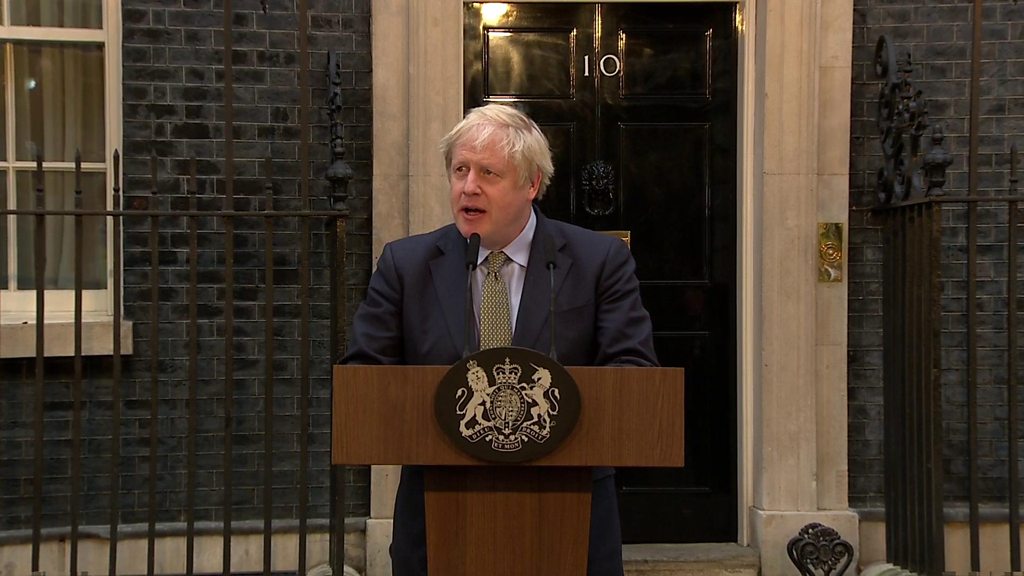 Boris Johnson has said he hopes his party's "extraordinary" election win will bring "closure" to the Brexit debate and "let the healing begin".

Speaking in Downing Street, he said he would seek to repay the trust placed in him by Labour supporters who had voted Conservative for the first time.

He said he would not ignore those who opposed Brexit as he builds with Europe a partnership "of sovereign equals".

The Tories have won a Commons majority of 80, the party's largest since 1987.

It means the UK is heading out of the EU at the end of next month, the BBC's political editor Laura Kuenssberg said, with Mr Johnson's "thumping" majority allowing him to get the laws required through Parliament "in a matter of weeks".

The Conservatives' victory in the 650th and final contest of the election - the seat of St Ives, in Cornwall - took their total number of MPs up to 365. Labour finished on 203, the SNP 48, Liberal Democrats 11 and the DUP eight.

Sinn Fein has seven MPs, Plaid Cymru four and Northern Ireland's SDLP has two. The Green Party and NI's Alliance Party have one each.

The Brexit Party - which triumphed in the summer's European Parliament elections - failed to win any Westminster seats.

The Conservatives swept aside Labour in its traditional heartlands in the Midlands and the north of England and picked up seats across Wales, while holding off the Lib Dem challenge in many seats in the south of England.

Speaking outside No 10, Mr Johnson thanked lifelong Labour supporters who deserted Jeremy Corbyn's party and turned to the Conservatives, saying he would fulfil his pledge to take the UK out of the EU on 31 January.

"I say thank you for the trust you have placed in us and in me and we will work round the clock to repay your trust and to deliver on your priorities with a Parliament that works for you".

Mr Johnson, who earlier accepted the Queen's invitation to form a government, also addressed those who did not vote for the Conservatives and still want to remain in the EU.

"We in this One Nation Conservative government will never ignore your good and positive feelings of warmth and sympathy towards the other nations of Europe," he said.

Mr Johnson's focus on the one nation pitch suggests he will seek to offer policies to people beyond the Tory heartlands - more public spending, for example, after years of austerity, the BBC's political correspondent Nick Eardley said.

He added that there is no strict definition of one nation conservatism, "but broadly, it refers to the idea the Conservative Party should act for everybody in the UK. That means policies that work for people from different economic backgrounds, from different regions and from the different nations of the UK."

When they return to Westminster next week, MPs are due to begin the process of considering legislation paving the way for the UK to leave on 31 January. Talks about a future trade and security relationship will begin almost immediately.

Nevertheless, Mr Johnson said the UK "deserves a break from wrangling, a break from politics and a permanent break from talking about Brexit". "I urge everyone to find closure and to let the healing begin."

He said he would use his new-found parliamentary authority to bring the country together and "level up" opportunities, while he said he recognised that the NHS remained the "overwhelming priority" of the British people.

The BBC's political editor Laura Kuenssberg said the PM's appeal for unity marked a striking change in tone to when he first became prime minister in July.

At 33%, Labour's share of the vote is down around eight points on the 2017 general election and is lower than that achieved by former leader Neil Kinnock in 1992.

Mr Corbyn has said he will not fight another election as Labour leader and that he expects to stand down "early next year" when a successor has been chosen by the party.
Add Comment