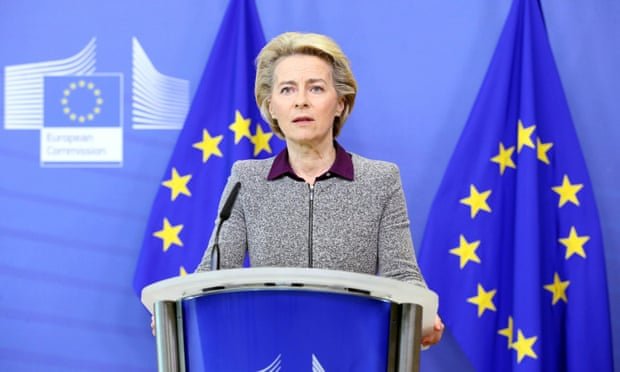 Brussels suspicions come as European commission chief warns Britain to abide by Northern Ireland protocol
Brussels’ plummeting trust in Boris Johnson has been laid bare in leaked diplomatic cables obtained by the Guardian, as the Brexit negotiations reopen in London with a warning from the European commission president that Britain must respect international law.

Ursula von der Leyen made her extraordinary intervention on Monday as Downing Street struggled to control the damage from disclosures suggesting it was backtracking on agreements made last year to avoid a hard border on the island of Ireland.

“I trust the British government to implement the withdrawal agreement, an obligation under international law & prerequisite for any future partnership,” Von der Leyen posted on Twitter. “[The] protocol on Ireland/Northern Ireland is essential to protect peace and stability on the island & integrity of the single market.”

The row over plans that could undermine the legal force of parts of the protocol on Northern Ireland came as leaked cables seen by the Guardian reveal the growing suspicion in Brussels of Britain’s motivations and strategy, said by sources to have been further damaged by the latest developments.

According to cables sent to EU capitals from Brussels in recent days:

* Johnson is suspected of holding back on finding a compromise on the key outstanding issues of fisheries, state aid and dispute resolution until the last moment in order to achieve a last-minute “trade off”. The strategy has been described by officials in the chief Brexit negotiator Michel Barnier’s team as “concerning” given the complexity of the issues. “These points will not be easy to iron out with just a phone call between leaders,” a commission official had told EU diplomats. “It is leaving it too late.”

* The European commission fears the home secretary, Priti Patel, will attempt to go round Brussels and open side negotiations on internal security after inviting ministers from the five largest EU member states to a meeting in London on 22 September. Commission officials have asked the capitals to avoid agreeing to any British proposals that are made there. “We need to be clear that nothing can be decided in those fields subject to negotiation,” officials advised.

* The UK is accused of recently “introducing” a new “concept” in the negotiations over access to British waters for European fishing fleets under which “80% of the common stocks” have been designated as “priority stocks” on which British fishermen have the biggest claim.

* The commission fears Downing Street is behind a barrage of anti-EU articles in the British press, citing reports accusing Brussels of intransigence directly ahead of the last round of talks. The recent talks between Barnier and the UK’s chief negotiator, David Frost, were described by the commission as “disappointing”.

The revelations provide the worst possible backdrop to the latest round of negotiations, which start in London on Tuesday, with Frost reiterating on Monday night the two sides “must make progress this week if we are to reach an agreement in time”.

Although Frost urged the EU to show “more realism about our status as an independent country”, the eve of the talks was dominated by the fallout from the proposals in the government’s internal market bill, due to be published on Wednesday.

The former Conservative chancellor Philip Hammond and the ex-justice secretary David Gauke added their voices to growing opposition to the draft legislation, which critics claim will negate key parts of the withdrawal agreement.

Gauke said the government would be “taking the most extraordinary risk” if it sought to unilaterally change the protocol through draft legislation due to be published on Wednesday.

“Any attempt to backslide from the commitments made in the Northern Ireland protocol would be seen as an act of bad faith by the EU and the wider world,” he said. “It would undermine trust and likely result not just in no deal, but an acrimonious no deal.”

Hammond tweeted that the government should avoid an “incredibly dangerous step” that he claimed would “hugely damage our standing on the world stage”.

Business leaders also warned that a Brexit deal was essential for safeguarding Britain’s economic recovery from the coronavirus outbreak and avoiding higher prices in the shops for British consumers as pressure mounts on household finances.

Josh Hardie, deputy director general of the CBI, said: “Amid all the noise and negotiations, businesses in the UK and EU remain clear – a good deal is essential. An agreement will be the foundation for post-Covid recovery across the continent.”

Furthermore, manufacturers warned that Brexit stockpiles had been depleted during the Covid lockdown and that many firms were running out of cash and time to prepare for leaving the EU. Retailers warned that the price of food and drink could rise due to border disruption, the imposition of tariffs and a weaker pound.

“A no deal would be the worst outcome for consumers. It would add hundreds of millions of pounds in tariffs to the cost of the food in British supermarkets, which would lead to higher prices and disproportionally hit the poorest households,” said Andrew Opie, director of food and sustainability at the British Retail Consortium.

The pound fell on Monday as City investors bet on the growing likelihood of the UK leaving the Brexit transition without a deal. Sterling fell about 1% against the US dollar on Monday to trade below $1.32, and fell by a similar amount against the euro to below €1.12 on the international currency markets.

With critics accusing Downing Street of seeking to blow up the talks by looking to rewrite the hard-negotiated Northern Ireland protocol, government sources were quick to deny it was part of a negotiating strategy, in a sign of some panic at the extent of the backlash.

“We have never seen it in those terms,” one senior government source said. “That idea has not come from anyone even close to this place.”

UK officials on Monday morning repeatedly stressed how minor the changes will be in the three key areas. The internal market bill will give ministers the power to decide whether or not potential state subsidies need to be reported to the EU, what counts as “at risk” goods that will need to be checked when crossing the Irish Sea, and whether export summary declarations need to be filled in.

If no mutual agreement can be reached by the joint committee with the EU, then ministers are likely to define those terms very narrowly, in the UK’s interests.

The withdrawal agreement currently stipulates, in contrast, that all goods should be deemed at risk of tariffs in the event of a lack of agreement within the committee.

“These are not changes made in good faith,” one EU official said. “But we will see what they actually do.”

A UK official briefed on the new powers insisted, however, that Westminster did not believe the new powers undermined the protocol agreed in December.

“The government is completely committed, as it always has been, to implementing the NI protocol in good faith,” the official said. “If we don’t take these steps, we face the prospect of legal confusion at the end of the year and potentially extremely damaging defaults, including tariffs on goods moving from GB to Northern Ireland.”

A No 10 spokesman insisted that the measures were “limited and reasonable” and that the UK would remain compliant with the Northern Ireland protocol. Another official described them as “minor clarifications in an extremely specific area” – comments aimed at bringing down the temperature in Brussels and Dublin.

Hardline Brexiters who initially welcomed the prospect of unpicking the agreement, a move some had been promised was possible when voting for the deal, were irritated by the Downing Street briefing that the changes were minor. “I’d like the UK to make promises it wants to keep,” one senior Brexiteer said.

The former Brexit secretary David Davis said: “I would be inclined to repudiate large parts of the withdrawal agreement, because they were agreed on the basis that there would be a trade deal.” He argued that should include ripping up the financial settlement if no trade deal is reached.

But Davis questioned the prime minister’s chief aide Dominic Cummings’ focus on securing control over state aid, something No 10 is keen to use to build up the UK’s tech industry, calling it “intrinsically un-conservative”.
Add Comment